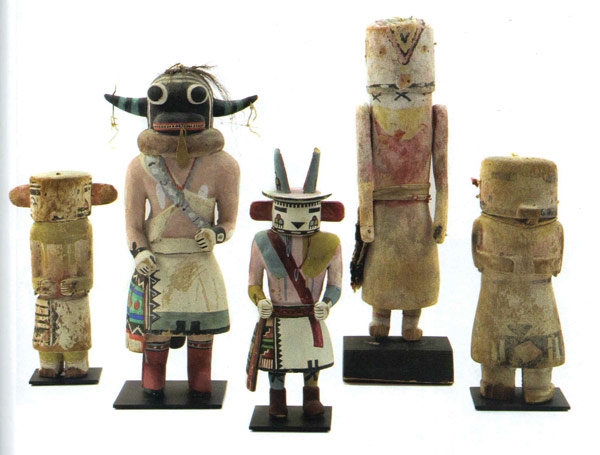 Hopi Kachina imagery has been an iconic symbol of the Southwest ever since the railroads first made their way across the region in the 1880’s. Not long after the arrival of the trains, tourism geared toward Native American culture followed and the Hopi and the Zuni began carving dolls not only for self-use, but also for sale or trade. Native American trading posts like Keams Canyon (founded in 1875) near Hopi carried a large inventory of Hopi Kachinas dolls, pottery tiles, and jars adorned with painted Kachinas.

Numerous well-known artists in the early 20th century traveled to the region to capture the people and their dances. Maynard Dixon first visited Hopi in 1902 and came back often. In 1923, Dixon made a four-month trip to Hopi to capture the Kachina societies in pencil and paint. Dixon’s the “Kachina Maker," depicts a male carver putting the final touches on a Kachina doll at Walpi.  Dixon also captured the mundane daily life of the people, which can be seen in his piece "Hopi Woman Cutting Meat." Dixon felt he needed to not only understand the spiritual side, but also how people lived. Contemporary artists continue to be inspired by the Kachina doll and Hopi culture. Ed Mell and Francis Livingston both draw on this imagery occasionally, and it’s reflected in their paintings of individual dolls and the dancers themselves. 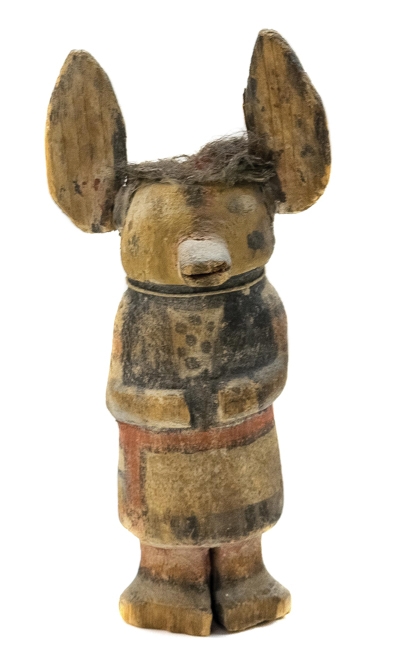 The Zuni and Hopi pueblos are associated with dolls made in the early 20th century, but many of the Rio Grande pueblos also made flat or alter dolls mainly for ceremonial purposes. Most collectors associate Kachina dolls with those made by the Hopi, as they had the most active carvers.

There are still numerous Kachina carvers at Hopi who make exquisite, intricate dolls and sculptures, which are often made out of a single cottonwood root. Dolls created by these well-known carvers can bring thousands of dollars. Unfortunately, you will often also see so-called "Kachina dolls", which are made to resemble crude Hopi dolls, in tourist traps, gas stations along I-40, corner road stands, and unreputable galleries. Instead of the intricate carvings, these replicas are crudely formed, non-descript, decorated with copious amounts of chicken feathers, and glued to a base displaying a non-Hopi sounding name.

These so-called "Kachina dolls" are, at best, produced in an assembly-type fashion using Native employees so the dolls can be legitimately sold as Native American Kachina dolls. Worse, they are sometimes imported from out of the country and sold as “Kachina style dolls.” These have no intrinsic value other than as a dust catcher to fill an empty space.

The Navajos do carve sculptures, which are collectible. There are artistic wood sculptures depicting Navajo ceremonies, such as Yeibeichei dancers, or ones done in a large format with whimsical imagery. The most notable Navajo carver is Charlie Wileto (1897-1964), whose carvings are very collectible.

Contemporary Hopi Kachina dolls are highly sought after, with a single large doll taking months to create, often to be sold within the first week of completion to either a high-end Indian art gallery or a collector who commissioned it.

Originally, Hopi dolls were made as gifts to young Hopi girls from initiated male Kachina dancers during the Bean Dance to help them be a part of the kachina methodology, spirt, and ritual of their tribe.

The dances performed by men and boys are an integral part of Hopi life and culture. There are close to a thousand different types of Kachinas, many of which are no longer known or danced; some of these earliest dolls cannot be identified.

Not all Kachina carvers from the early 20th century represented specific Kachinas; a famous example is Wilson Tawaquaptewa's (1871-1960) work. Wilson's Kachina dolls are unsigned, but are identifiable as an artist by his unique characteristics.  These include exaggerated rabbit ears, lines of black dots along the body parts, and vivid primary colors. Tawaquaptewa dolls are highly collectible and can bring a thousand dollars for a small piece to many thousands for a large, intricate piece. 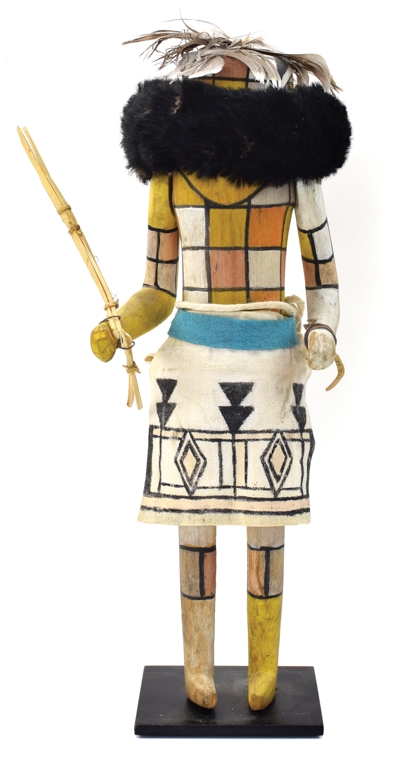 There are numerous examples of "Old Style dolls," which can be legitimate Hopi Kachina dolls done in a simple style reminiscent of the early dolls. Unfortunately, there are also unscrupulous nonnatives who try and pass off Old Style carvings as vintage. Elements to look for in the determination of authenticity, value and the dating of Kachina dolls include wear, body style, coloration, species of wood, and provenance.

Wear: Inspect the doll for wear in places that make sense. Ethnographic use mainly occurs around the side of the doll and head or any place normal human handling would occur over time. Regions of broken or chipped appendages (which are typically found in vintage dolls) should have areas of oxidation where the damage occurs. Exposed cottonwood will turn a honey color over time, versus a whiter wood, which would be consistent in its coloration.

Kachina forgers often use coffee grounds to enhance and give their carvings an overall darker appearance throughout. You may even see brush strokes where the color has been applied.

Fine scrape marks made from sandpaper along the face or areas that would not normally occur from handling are red flags, especially if the so-called damage has a consistent appearance.

Style: The earliest dolls, from the 1880’s to around 1900, are often very simple in structure and design. The arms are close to the body with no fingers (referred to as tummy warming in the trade). These are rare dolls and can be quite expensive. A late 19th century Pah’lik Mana in 2017 brought $20,000 at auction. This price range is not unusual, and rare or large Kachina dolls in good original condition can bring into the low six figures; exceptional examples have brought over a $100,000. The evolution of the orientation of the dolls arms went from around the stomach, to the sides, and finally straight out or in action with each decade.

Color: Early coloration of Kachina dolls include natural mineral paints of a dark sage green, pink, yellow and red ochre.  A good way to help date early Kachinas is to use examples that are well documented age-wise and found in museums, and compare these examples to pieces being offered for sale. The Heard Museum, the Museum of Northern Arizona, and the Millicent Rogers Museum all contain quality examples of early Kachina dolls.  The Amerind Museum in Arizona also has two excellent examples of early Kachina Dolls. Historic mineral pigments are extremely difficult and sometimes impossible to reproduce, so they are an excellent objective marker for older dolls.

Wood, Clothing, and Condition: Historic Hopi Kachina dolls will almost always be made out of cottonwood root, which is a very lightweight wood. Occasionally juniper was used, which is a dense wood, but its use is mainly a rare exception. Wood with cracks, as if dried, split, and then painted over, can be a warning sign if the doll is supposed to be vintage, as the wood used historically did not have cracks. Ears, noses, mouthparts, and eyes are usually carved in separate pieces and then put into the Kachina with a wooden peg. Close examination of where these insert may reveal white pegs, which means the appendage may have been repaired or replaced. 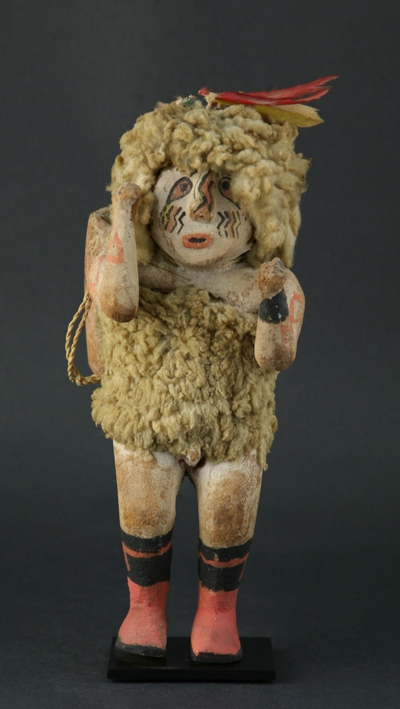 Blacklight examination will often reveal fluorescent areas, which indicate a newer source of paint, usually overpaint. Often the nose, ears, or bug eyes will have chips or scrapes, as they protrude and are susceptible to damage. Feet and arms are often broken and reglued. This kind of wear shouldn’t deter you from collecting a Kachina doll in my opinion, as it simply confirms what is expected in a vintage doll.

Clothing adornment on Hopi dolls is uncommon, although it does occur. However, clothing is characteristic of Zuni dolls.  Early clothing can be hand spun cotton, calico cloth, or Bayeta trade cloth. Zuni dolls will have articulated arms using metal-headed nails. Early dolls may have nails with square heads. These last two characteristics of articulation and clothing are typical Zuni attributes.

Valuation:  Determining the value of vintage Kachina dolls (1880-1940) is dependant on many variables; one factor includes pieces created before the 20th century, which are rare and generally the most valuable. Dolls from around 1900 to 1920 are the second most valuable, followed by 1930-40 age group in terms of the collectability hierarchy.  Contemporary dolls are valued more by the carver and the intricacy of the doll/sculpture.

Kachina types are equally important as age and can sometimes outweigh age. Rare types, large examples, or dolls with a tableta, headdress, or an interesting/pleasing form visually can bring a premium.

Original, untouched condition is desirable, especially if the piece is in excellent condition.  It is not uncommon to see some restoration in these early pieces. Breaks, wear, and missing parts are common in a wooden doll handled by loving children. Dolls that have zero wear at all may represent a restored or a later doll that is in a “vintage style." Remember, there were not that many Kachina carvers in the early 20th century, so dolls are uncommon.

Provenance: A well-documented history regarding the doll can add a huge premium in terms of value. Always get the provenance in writing as part of the history of the doll.

Collecting vintage Kachina dolls can become a lifelong obsession. I have been collecting and selling early Hopi dolls for over 25 years and I have seen and learned much during that time span.  Here are two pearls of wisdom:

If you are being offered multiple old dolls from a single collection, look to see if any of the dolls have identical color usage and carving style that would indicate the same carver’s hand.  I have only seen dolls by the same carver in a supposed early original collection if they were done as a pair, such as representing snake dancers. Those trying to fake old dolls figure if one doll is valuable, then two or even three is even better; the greed factor reveals itself and helps undermine the forger.

Always make sure wear is consistent with human usage and not from mechanical aging, which is a common practice in making old-style fakes, sandpaper being the most common tool.

Museums and documented early examples in books are great references for learning and when you’re ready to start collecting, buy from an ATADA (Antique Tribal Arts Dealer Association) dealer. The ATADA.org website is a great resource to find dealers who are very knowledgeable, love what they do, and will guarantee what you buy. Wood and stone objects are the easiest types of materials for forgers to work with, so Kachinas are a good target, though most forgers are rarely historically correct with materials and simply look for an easy mark.

Buy with your heart, but do so only after you have taken the time to educate yourself. Indian Art Magazine is a good place to start.