For over three decades artist Veryl Goodnight has transferred her love of animals and the American West into her work. Goodnight finds endless inspiration for both her sculpture and paintings from the abundant wildlife surrounding her 57-acre residence located west of Durango, Colorado, overlooking Mesa Verde National Park.

Goodnight's bronzes will be featured throughout December at Medicine Man Gallery in Tucson, Arizona. Works vary from miniatures to life-sized and larger. Two of Goodnight's major works from this year include a life-sized elk calf standing in wildflowers titled High Country Summer and a mule deer doe with twin fawns emerging from oak brush titled Emergence. 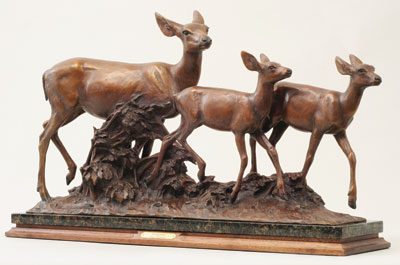 "While I have always hinted at the landscape in many of my wildlife sculpture, living in such spectacular scenery has inspired a new emphasis on the landscape," says Goodnight.

Working in a traditional realism style, Goodnight's subjects range from Western women and wildlife to horses and other domestic animals. She began her art career in the late 1960s as a wildlife painter and transitioned to wildlife sculpture in the 1970s. In fall 2006, she and husband Roger Brooks moved to a southwestern painting. Inspiration for Goodnight's new works stem from her new surrounding, where deer and elk can be seen almost daily, as well as beaver and an occasional bear and even a mountain lion. 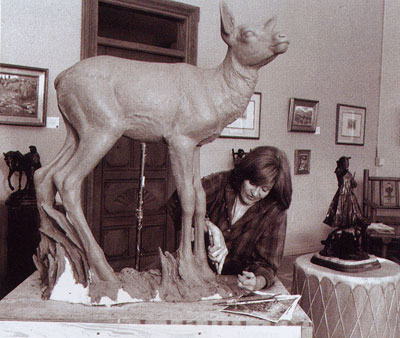 "Cattle are driven past our property in the spring and the fall. There is every breed of horse imaginable in the immediate area including draft horses, mules, and donkeys - all of which will model for me in time." 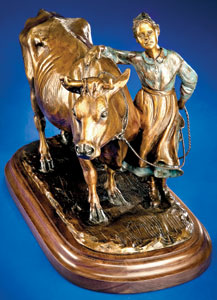 In her recent sculpture Emergence, the artist uses body language to convey the story of a nervous doe herding her brood out of cover and into the open. In High Country Summer, Goodnight illustrates the calmness of an early summer day with a soft wind blowing the flowers around an elk calf's legs.

"Her nose is in the air, but she is not at all frightened," adds Goodnight.

Another fun sculpture is titled Daydreaming. Here, a teenage girl is standing next to a dairy cow she should be bringing in from the field, but her faraway look, arm draped over the cow's back, and rope hand on her hip clearly convey that she has other things on her young mind. 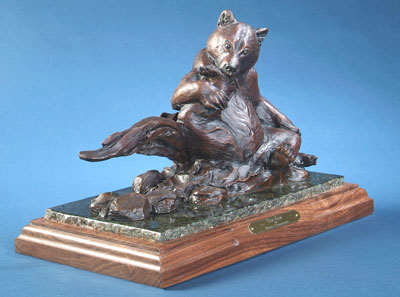 While Goodnight aims to relay stories through sculpture, she also hopes the viewer will look beyond her technical skill and accuracy to find ways to relate to her subjects from their own personal points of view.

"I bring my own history and perspective to each piece, but a collector has to feel that they too have a relationship with the piece in order for it to become part of their collection," she adds. 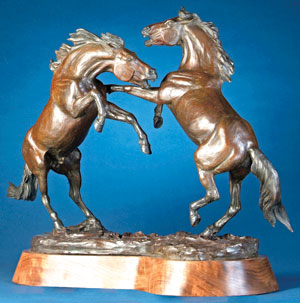 Collectors, which include both private and corporate buyers, often comment on how real Goodnight's bronzes appear. Working from life enables Goodnight to infuse the energy of her models that can't be duplicated any other way.

"The reason is simple, I work from life," she says. "The Western women receive the broadest range of comments. I am told that the women seem so capable and yet remain feminine. I hope so, that is certainly my goal.