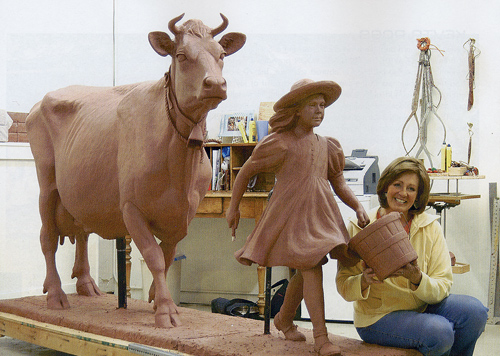 Most sculptors working on monumental pieces start small in some way, whether with a series of sketches, a hand-size clay model, or a slightly larger maquette. Veryl Goodnight’s Blue Bell Cow and Girl, however, began less conventionally with a logo created a century ago, a tiny silhouette of a cheerful girl in a sunbonnet leading a placid bovine to the milking shed, rendered small enough to fit on a stick of butter or a bottle of milk.

To celebrate the company’s centennial this year, Blue Bell Creameries of Brenham, TX, contacted the renowned sculptor over four and a half years ago. Goodnight – best known for The Day the Wall Came Down, a one-and-a-quarter-life-size stampede of horses commemorating the fall of the Berlin Wall, now displayed at both the Allied Museum in Berlin and the George Bush Presidential Library – relished the chance to research the subject and bring it to full, realistic life. “My knowledge of Jersey cows was slim to zero,” she says, recalling her search among top farms for an exemplar of the breed, of which she shot digital video. The model for the girl was an easier find. She’s the daughter of the contractor who is now building a new home for Goodnight and her husband after their recent move from Santa Fe to Mancos, CO. Expect the sculpture to debut this summer in a new garden on the grounds of Blue Bell’s headquarters, with the sculptor as a proud guest of honor. “I don’t take that many commissions,” says Goodnight of the work, which is also available in an edition of 21 miniatures measuring 14 by 27 inches. “It has to be something that’s in my heart.” Goodnight’s work is on view at Mark Sublette Medicine Man Gallery, Tucson, AZ.