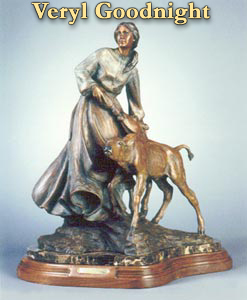 Back from the Brink

Published online courtesy of Art of the West, September/October, 2001

"I Work From my Heart"

Twenty miles down a dirt road stands an isolated rustic log cabin, its sole occupant busily painting and sculpting. In her mind, she sees images of the past, passionate hardships and triumphs, partnerships forged of adversity, people toiling, with animals sharing the load. She embraces the images, gets her hands around them, and casts them in bronze, paying emotional tribute to the nameless faces of the Old West.

That scene exists only in Veryl Goodnight's mind. Instead, of a log cabin at the end of 20 miles of dirt road, she lives and works with husband Roger Brooks and a virtual menagerie of animals just miles from the city lights of Santa Fe, New Mexico. 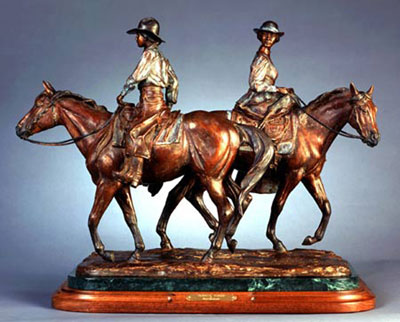 "Roger is a pilot, and sometimes we fly over Western trails," says the 53-year-old Colorado native. "I'm familiar with history, and I'm in the air seeing it all from a distance, but in my mind and heart, I'm in a wagon going across the prairie. Physically, I'm in one century and mentally I'm in another. It seems to be a calling, and there's a real intensity on animals.

Goodnight regards animals almost as co-partners in Western settlement and many of her sculptures suggest a symbiosis between animals and women, both of whom often shared day-to-day existence and work. "The grocery store of the pioneer women was in their backyard -the garden, chickens, and milk cows," she says. Animals were often more than a source of food, however. In fact, historians claim that Charlie Goodnight's wife, the only white woman for miles, had lengthy conversations with her chickens. "After having chickens model in my studio, I can understand why. The soft clucking is one of the most peaceful sounds I've experienced. 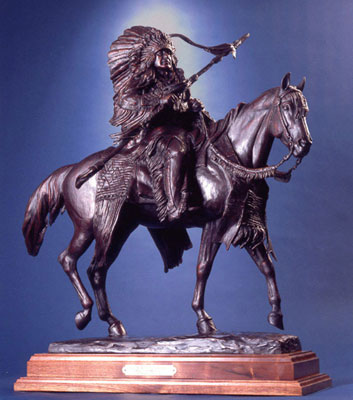 The Goodnight heritage and the love of animals launched Goodnight on one of her most intense research projects, Back From the Brink, a portrait of Mary Ann Goodnight nurturing a bison calf. The in-depth study included raising Charlie, a stray 7-day-old bison calf that Goodnight and Roger brought back from Idaho in Roger's plane. Once the year-old bison was introduced back into the wild, he injured himself, running into a steel pipe fence, so Charlie and Roger are now a regular team on hikes up the arroyos near home.

As Goodnight writes in her essay, Saviors of the Southern Bison Herd: Colonel Charles and Mary Ann Goodnight, "My love affair with bison began innocently enough. A friend sent me a copy of the January 2000 issue of Texas Highways containing an extensive article on the Goodnights. As a distant relative of Colonel Goodnight, I was familiar with his interest in buffalo. However, I had never heard the story of how his wife, Mary Ann, persuaded him to rescue a few buffalo orphans for her to raise and protect from sure slaughter by the hide hunters. As a sculptor of Western women and animals, this vision was-hands down-mine to create." 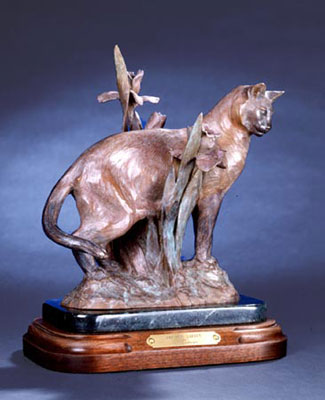 Goodnight is licensed to keep wild animals at her 10-acre ranch, so she definitely gets up close and personal with her models. Horses, cats, dogs, and a bison herd of one are steady company -family, really -and Goodnight's art reflects a keen appreciation of animals and their unique partnership with humans. Interestingly, when she was commissioned to create a monument to the demise of the Berlin Wall, Goodnight instinctively chose animals to convey the sentiment. That monument, The Day the Wall Came Down, portrays five free-spirited horses jumping over the rubble of the collapsed wall. One casting of the monument stands at the George Bush Presidential Library in Texas, the other is on display at the Allied Museum in Berlin.

"They took the piece over in a C-17 cargo plane, and it was just press people, the Air Force personnel, Roger and I," Goodnight says. "It was the fiftieth anniversary of the Berlin airlift, and George Bush came over and unveiled the piece." Since being put in place in Germany, the monument has attracted worldwide attention for its theme and inspiration, and Goodnight is pleased that her sculpture brings a compelling message to international diplomacy. 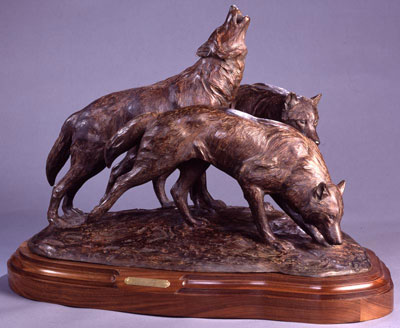 "I put a lot of heart and soul into my work," Goodnight says. "I work from life first and second, I work from my heart. I'm not into doing something commercial. I have to feel it to do it." Goodnight's feelings about women appear most evident in the Women of the West series, which she started in 1984 with a gentle depiction of a pioneer woman reaching out to a fawn. Goodnight's intent was to portray compassion and vulnerability and, again, the links between humans and animals.

Similarly, Goodnight's Trail Trilogy makes strong statements about the women of the West: their courage, determination, and fulfillment. One piece, for example, reminds viewers of the hard road leading West, the travails along the way, and the tears that mixed with the dust of the trail. No viewer can ignore the pain and triumph written in bronze. For further expression, Goodnight has take to writing verse to accompany each piece. It is as if she is driven to recreate not only the scene, but the passion of an era. 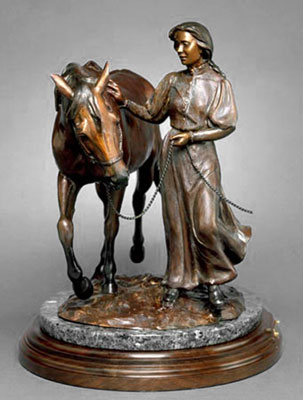 Surrounded by success in the Western art world, Goodnight hasn't strayed far from her roots. The Denver kid originally drew horses with a pencil, noting that it was the closest she could get at the time to having a horse of her own. Drawing turned to sculpting in the snow, with an intense push to capture the true anatomy. At 16, Goodnight earned the Best of Show honors at a sidewalk art show, paving the way for further paintings.

Following her high school graduation, she hatched her plan to go to art school at the University of Colorado. The focus at that time, however, was abstract art, which was a turnoff for Goodnight, who opted for business college as a practical approach, with her dad advising her to get further art training by working individually with artists. The formula seemed a good one and, to this day, Goodnight credits her father's wisdom and artist peers' willingness to share their knowledge, as essential ingredients of her success. 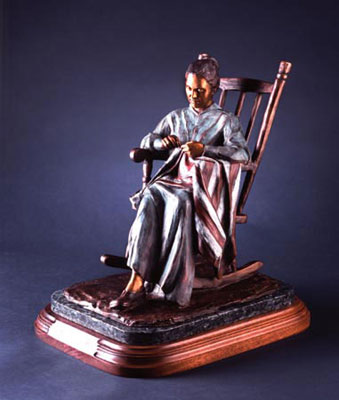 Goodnight's prescribed road led her to painting first, and she took art classes at night, feeding off the inspiration of other artists she met. By age 20, she had her own studio, but a restlessness to gain a better background in anatomy mover her into sculpting in 1982. Goodnight was hooked. Fittingly, her father again lent his influence, assisting his daughter in cobbling together the armature for her first wildlife sculpture. Today, it is somewhat ironic that Goodnight has made her name in sculpture, but has lately come full circle and is back at the easel. Her upcoming show, at a gallery in Jackson, Wyoming, will feature both bronzes and oils.

"I'm the reverse of where I first started," Goodnight says of her re-entry into painting. "Sculpting used to be a hobby and painting was first; now it's reversed. In my painting, I am somewhat looser than when I sculpt." Of her return to painting, she admits that "plein air is instant gratification; a painting can take me three hours instead of the three months for a sculpture. But my pride is on the line with this show, and I don't want people to say, 'Veryl, keep your day job.' I want to be ready." 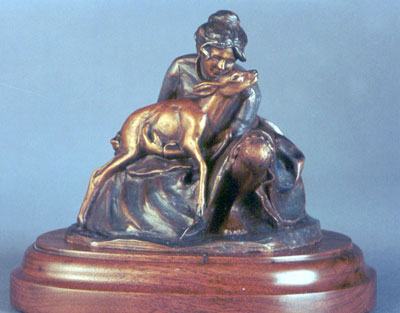