Tim Yazzie was raised in New Mexico in the San Felipe Pueblo. His maternal Grandmother made beautiful pueblo pottery, and his paternal grandfather was a rug maker and silversmith. As a young boy he was taught in the ways of native life in the pueblo. His maternal grandfather was a deeply spiritual man who was very knowledgeable in the history, religion, and traditions of pueblo life. From him, Tim learned many valuable things about who he is as well as many things in the kivas concerning the things of life and the world around him. One of the things that Tim loves is ceremonial pueblo dances. Dancing and the individual spiritual experiences he has had, have helped him shape his life, and influences the ideas that he puts into his work.

As a youth, he started realizing his love for art, and recognized that he had the abilities to create the things he could see in his mind. He could just sit down and draw designs and pictures of the things around him. He still uses that ability today in his jewelry making. He draws all of his designs free-hand on the silver, and allows the silver and the other materials that he is using to guide his creative process and develop the ideas that he sees in his mind.

Tim started silversmithing as a young man, and refined his jewelry making skills working with well-known native artists like Chalmers Day, and Jimmy Harrison. They encouraged him to pursue his talents and even use some of his creations to enhance the designs that they developed. Tim created a lot of his overlay designs during this time, and also started doing something different by adding inlay work and stones to his overlay. He jokingly created a new word and calls it his “orale” designs. When you look at his most recent jewelry pieces, you can see many pottery designs, which undoubtedly come from the inﬂuence of his grandmother, and when he adds his ﬁne inlay and stone work, his pieces are extraordinarily unique and beautiful and become one of a kind.

Tim took a 6 year hiatus from his artistic pursuits and has recently moved to Tucson, Arizona. Being in Tucson has caused him to want to pursue his skills as an artist with new passion. Using the ﬁnest of materials, he is now creating new designs, each unique and beautiful, pushing his native pueblo art to new horizons. Native American Art has a great and noble legacy. Tim is hopeful that through his jewelry creations, he will add something meaningful to the future of that
legacy. 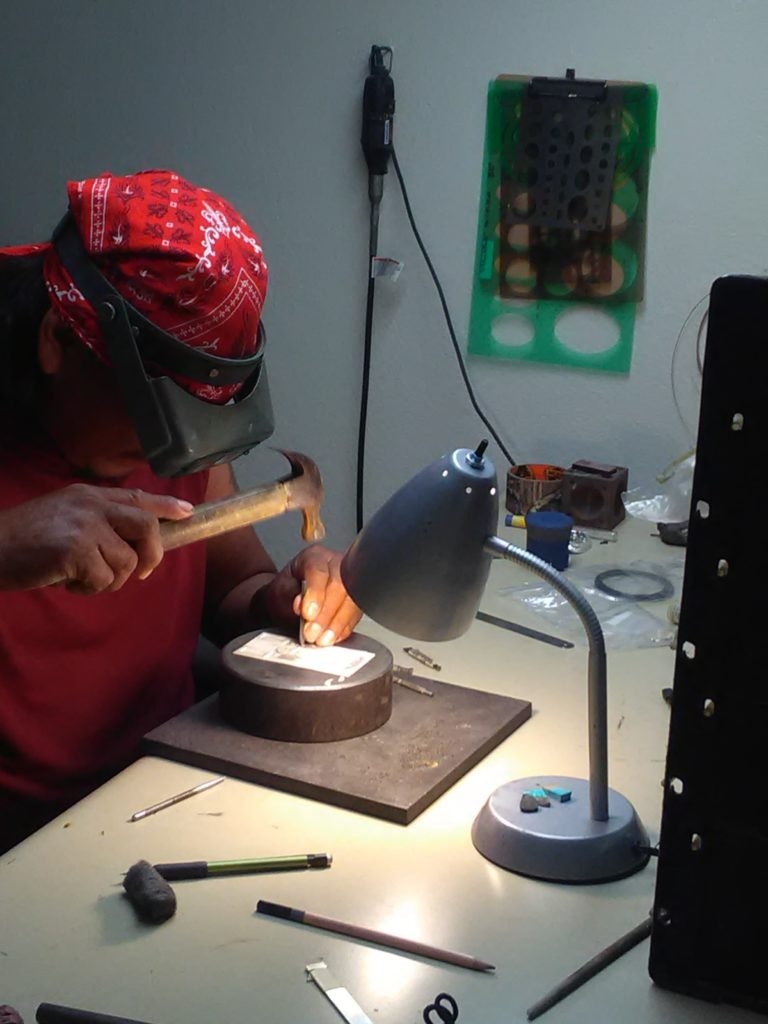 Tim Yazzie at his home workbench