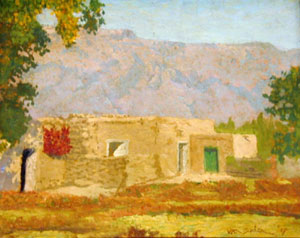 Shortly after launching his art career back in the United States, Van Soelen headed west, seeking relief from tuberculosis.  After spending time in Utah and Nevada, he settled in Albuquerque, New Mexico in 1916.  Working as a commercial illustrator, he also began to sell his fine art paintings.  To acquaint himself with the people and landscapes of New Mexico, Van Soelen spent time in the small towns and ranches of the region.  Early on, scenes of ranch life became his favorite subjects.

Van Soelen married Virginia Carr in 1922 and the couple moved to Santa Fe before permanently settling in nearby Tesuque, New Mexico in 1926.  Van Soelen's reputation grew rapidly throughout this time, but like other New Mexico's easel painters, most of his customers were in the East.  In the 1930s he established a second studio in Cornwall, Connecticut to be closer to that market.

Van Soelen painted in a detailed, realistic style with a slightly muted palette and strong draftsmanship.  Though most famous for his ranch-life genre paintings, he also painted landscapes and formal portraits, and produced several popular lithographs on cowboy themes.

In 1938 Van Soelen won a mural commission for the Post Office in Portales, New Mexico.  He was a Fellow of the National Academy and exhibited in various juried exhibitions including the National Academy, the Metropolitan Museum of Art, and the Chicago Art Institute.  In 1960 he was named Honorary Fellow in Fine Arts by the School of American Research.