The romance if the cowboy myth has survived in Western art for more than a century.

The myth of the American cowboy began to grow in the latter years of the 19th century when between 6 million and 9 million cattle were driven by these men on horseback from Texas to Kansas.  They entered the imagination as individualistic Anglo-American men rescuing damsels in distress.  In reality they were Anglo, Mexican, African-American, men and women who worked together as a team and had little time for anything other than work.  In his book, The American Cowboy, Lonn Taylor wrote, “Cowboying was not an old man’s job or even a middle-aged man’s job, and 10 years of hard riding was about all the human body could take.”

William Frederick Cody (1846-1917) was an entrepreneur and recognized that there was money to be made in perpetuating the romantic myth of the cowboy.  His nickname “Buffalo Bill” was earned when he killed 4,280 head of buffalo in 17 months to fulfill a contract to feed the construction crews of the Kansas Pacific Railroad.

In 1883 he organized Buffalo Bill’s Wild West, an outdoor extravaganza of the dramatic myth of the West.  He took the show to England in 1887 and performed for Queen Victoria  In 1889, the show toured the continent.

Rosa Bonheur (1822-1899), the famed French painter of animals, toured the grounds of the show when it was in Paris to sketch the animals.  She met Cody and invited him to her chateau in Fontainebleau where she painted Col. William F. Cody (Buffalo Bill) astride his horse.

The reality of the life of the cowboy was captured in early photographs.  John C.H. Grabill set up a photography studio in Sturgis, South Dakota, in 1886.   Between 1887 and 1892 he sent 188 photographs to the Library of Congress.  He documented the settlement of South Dakota and Wyoming and its effects on the native community.  His iconic image, The Cow Boy, circa 1888, documents the clothing and equipment of the working cowboy.

The earliest short films of the West were produced in 1894 and featured performers in Buffalo Bill’s Wild West including Cody himself as well as Annie Oakley.  The 10-minute long film The Great Train Robbery appeared in 1903.  Its phenomenal success began the period of the “Western.”

Billy Schenck has been influenced by Western movie stills, accommodating them, coloring them, and making them into dramatic evocations of both the past and the present.  In The Long Descent, a cowboy prepares to lasso a wild horse as his own horse kicks up dirt, struggling to keep its footing on the steep slope. 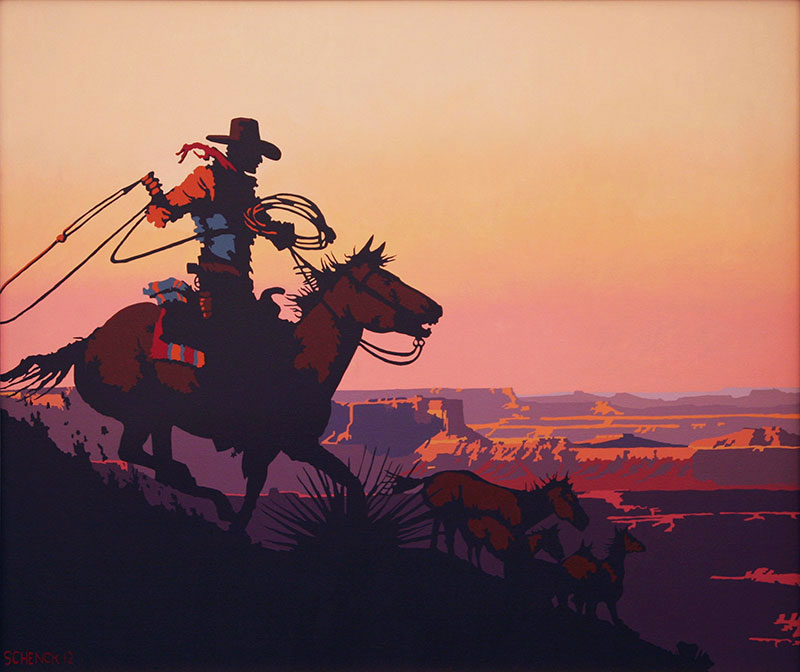 James E. Bama portrays more of the reality of cowboy life in Drift On Skull Creek Pass.  The pass lies between Cody, Wyoming and Billings, Montana, and can be treacherous in winter snows.  The cowboys, both on their horses and leading them, attempt to round up the panicked cattle.  Known for his intimate and intricate portraits, Bama portrays here the daily struggle of the anonymous cowboy.

Although millions of cattle are no longer being driven overland, the hands-on work of the cattleman and rancher continues into the 21st century.  Jason Rich portrays the latest generation in Young Roper.  Rich grew up riding horses as well as drawing them.

Glenn Dean finds a spiritual element in the landscape and admires the aesthetic response to it that he finds in the work of the Western painters from the early 1900s such as Frank Tenney Johnson (1874-1939), William Herbert “Buck” Dunton (1878-1936) and Maynard Dixon (1875-1946).  “Their work emphasized the importance of seeing the color of light combined with interesting compositions and seemingly effortless designs, while carefully observing the simple and basic characteristics of a specific location.”  His High Desert Drifter creates a balance between the drama of the landscape and the repose of the horse and rider. 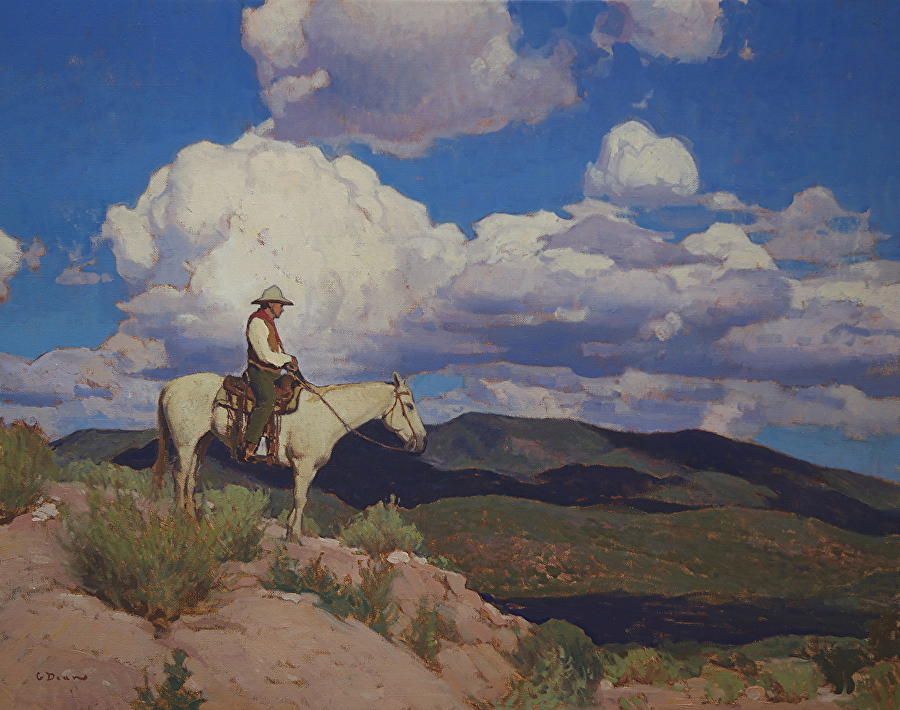 Dixon also responded to the reality of the West rather than the myth. “My object has always been to get as close to the real thing as possible – people animals and country.  The melodramatic Wild West idea is not for me the big possibility.  The more lasting qualities are in the quiet and more broadly human aspects of Western life.”