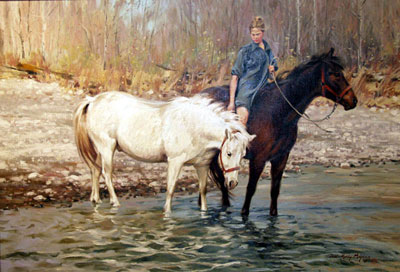 Terri Kelly Moyers says she cannot recall a time when she wanted to be anything other than an artist. Since she drew animals as a child, she had consistently directed most of her time and energy toward pursuing that goal, with her early studies at the Alberta College of Art.

Terri Kelly Moyers also believes she has been fortunate to be able to study with a number of fine artists, including Robert Lougheed, Bob Kuhn, Kenneth Riley and Howard Terpning. She also has studied with Ned Jacob, Clarence Tillenius and William Moyers, the noted cowboy artist who is her father-in-law. 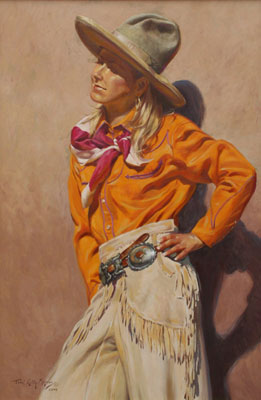 From 1978 to 1982, Terri Kelly Moyers made many trips to the Okanagan Game Farm in Penticton, British Columbia, to paint animals from life with other artists from all over North America. It was there that she met John Moyers in 1979, a fellow artist who is now her husband. After their marriage, they continued to take annual trips to Canada to paint, as well as frequent painting expeditions around the West.
Like her husband, Terri Kelly Moyers is an ardent advocate of plein air painting. She is convinced that working out of doors directly from the scene is the finest means of growing as a painter, learning to see and interpret the ever-changing atmosphere and light. She says, "I put things down I think are beautiful and that move me. I want to share what I see with other people and help them have the same pleasure I have. Fifty artists could set up in front of the same scene, and they each would paint different pictures. Each person interprets and edits things in a different way, infusing his or her work with a different quality or emotion."

A profile on Terri Kelly Moyers and her husband in Southwest Art said the couple has the same passionate desire to experience renewal in nature that Edward S. Curtis and Joseph Henry Sharp had. Married for more than two decades, they are now "well schooled mature artist in command of their medium. Their study and understanding of the lessons of the past have allowed them to apply their unique styles to their visions of the inner working of the natural world." 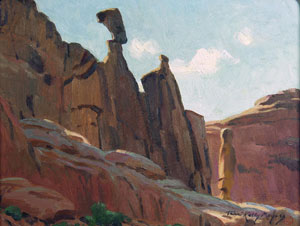