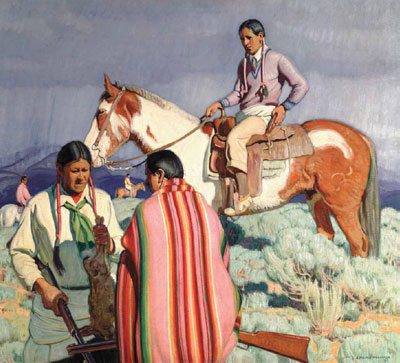 The Denver Art Museum's Petrie Institute of Western American Art in conjunction with the Coors Western Art Exhibit and Sale present the 2nd annual WinterWest, a one-day symposium exploring the art of the Taos Society of Artists.

The symposium will feature several key speakers focused on the art of the Taos Founders like E. Martin Hennings, Ernest Blumenschein, E. Irving Couse, Oscar Berninghaus and Bert Phillips. The event is set in conjunction with the exhibition in Contemporary Rhythm, The Art of Ernest L. Blumenschein, which is currently at the museum before opening at the Phoenix Art Museum in March. 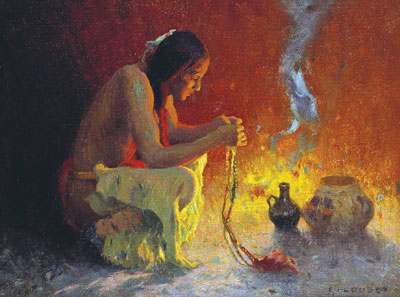 "What we want to do is put Blunschein in perspective with the two academic traditions he so uniquely bridged," says Petrie Institute of Western American Art's Directory Peter H. Hassrick. "He was trained as an academic painter in Paris with Couse, Sharp and Phillips, but also was very inclined toward Modernism and a look at Indian life that wasn't totally idealized but informed by what they actually did and who they were." 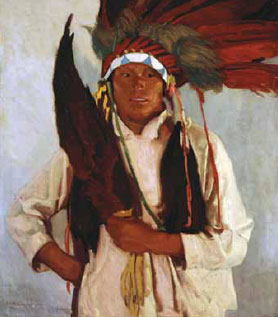 Hassrick's lecture is titled Taos Transformations: the Art of Ernest L. Blumenschein and is based on the critical role the artist played in determining the standard of achievement and the successful future of Taos as an artist colony.

"It was a complex world when and Phillips dreamed up the Taos Art Colony," says Hassrick. "And, it was not just a colony of painters, but really an artist colony with literati, intellectuals and painters and they all contributed to a heightened intellectual environment which was challenging, creative and rewarding. It was all thanks to Blumenschein and Phillips and their persistence, but to have that happen in a dusty town in nowheresville, New Mexico, is still pretty astonishing." Dr. Marie Watkins, professor of American History at Furman University, is presenting a talk titled What Happened in Paris Didn't Stay in Paris Beaux Arts Aesthetics in the Work of Eanger Irving Couse, Bert Phillips and Joseph Henry Sharp. 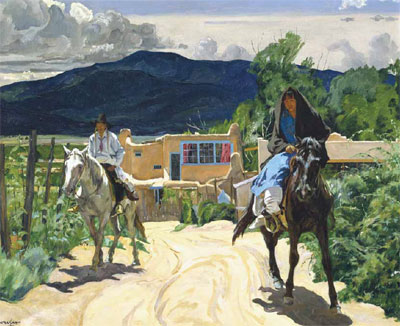 Dr. Judith Barter, curator of American Art at the Art Institute of Chicago, will look at the Colony through another tradition they inhabit - Modernism, particularly the Chicago School. Her talk is titled Modernity, Chicago and the West and discusses the introduction of Modernist perceptions into the interpretation of the Taos scene as found in works by slightly later artists like Walter Ufer, E. Martin Hennings and Victor Higgins. 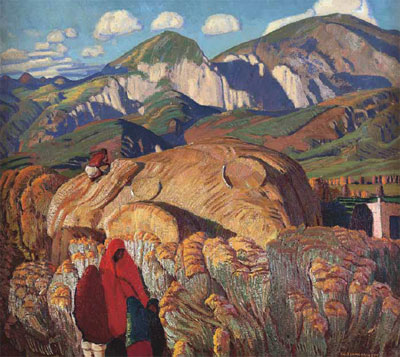 "That Chicago tradition is important as both Ufer and Hennings came through Chicago and had more of an Modernist, edgy approach," says Hassrick. "And, they were all in the early Taos Society. Blumenschein was the center post and he was able to work and understand the validity of both camps. The Modernists idea ended the Taos Society after 11 years because people came in and the more traditionalists wanted them out." Peter Stremmel, gallery owner and auctioneer of the Couer d'Alene Art Auction, is alos giving a talk titled The Western Auction World and How it Works. Stremmel is set to reveal the process and secrets of the Western auction business and how the public can be "safely and profitably engaged."

The symposium also includes a tour of the Eidtler Gallery of Western American Art at the Denver Art Museum including the Charles Russell works from the Tom and Jane Petrie Collection. 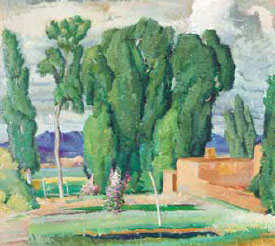