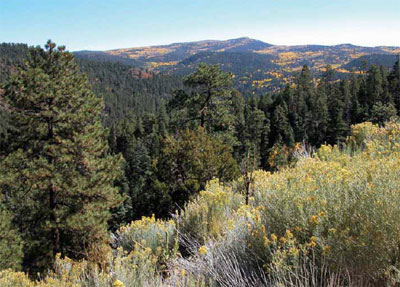 Aspens in the mountains along the Taos High Road

When D.H. Lawrence first experienced the clear light of the high desert of northern New Mexico in the 1920s he said "something stood still in my soul..." The area still has that power, and perhaps nowhere more than on the High Road between Santa Fe and Taos. To fully appreciate the power of the environment between Santa Fe and Taos you need to make the trip back and forth twice - up and down the High Road through the mountains and old Spanish villages, and up and down the road that runs through the Rio Grand Gorge.

Nearly 300,000 people visit the historic shrine El Santuario de Chimayo on the High Road every year. Built of adobe in 1816, the Santuario is a favorite subject for painters and photographers. The Santuario commemorates the miraculous powers of the "holy dirt" found now in a hole in the floor of a small room at the back of the chapel. Chimayo is also famed for its chile and for the colorful weavings of the Ortega and Trujillo families. Irvin Trujillo was honored by the National Endowment for the Arts in 2007 with a National Heritage Fellowship that recognizes "lifetime achievement, artistic excellence and contributions to our nation's traditional arts heritage." 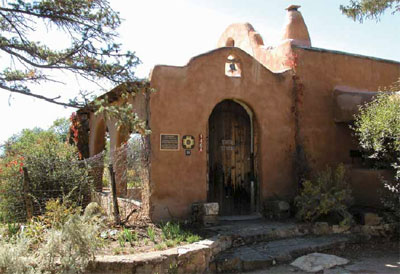 The home and studio of E. I. Couse, maintained by the Couse Foundation, Taos, New Mexico

The town of Taos was settled in about 1615. In the early 20th century it was discovered by a group of artists who settled there and established the Taos Society of Artists. 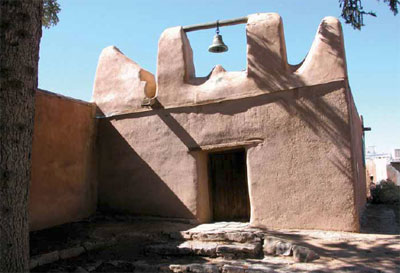 The Couse home and studio contain original furnishings, collections, and objects that Couse used in this paintings

Visiting Taos today is to step back into the time of the Founders of the Society, despite the traffic and other tourists. Taos Pueblo, occupied for over a thousand years, and a prime inspiration for the Taos Society artists, still welcomes visitors. The Blumenschein Home and Museum is housed in the building E.L. Blumenschein and his wife Mary bought when they moved permanently to Taos in 1919. It is a fascinating record of life in Taos in the early years of the 20th century. The Harwood Foundation was formed in 1922 by the widow of artist Burt Harwood - joined by Bert Phillips and Victor Higgins - as a nonprofit foundation to serve as a cultural center for Taos. Today the Harwood Museum of Art houses a fine collection of Taos Society painters as well as their illustrious successors. The Taos Art Museum is housed in the home and studio of the great portrait artist Nicolai Fechin who arrived in Taos in 1927. 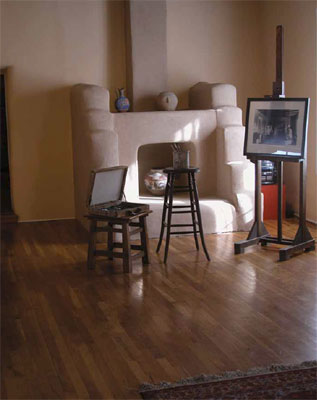 Blumenschein's well preserved studio. The Blumenschein Home and Museum is housed in the building E. L. Blumenschein and his wife Mary bought when they moved permanently to Taos in 1919.

The Couse Foundation maintains the E.I. Couse Historic Home and Studio as well as two studios owned by Joseph Sharp. Couse was the first president of the Taos Society of Artists and Sharp was a founding member. The house remains substantially unchanged since 1936 and is still surrounded by the gardens designed by Couse's wife, Virginia. The mission of the Foundation is to preserve the Couse home and studio, along with its contents and archive, as well as the Sharp studio "to give the public an authentic window into the past and to stimulate scholarly research and training in the fields of historic preservation and Southwest art history."

Both the Couse home and studio contain original furnishings, collections, and objects that Couse used in his paintings. The rich archive includes records and sketchbooks, correspondence, photographs, newspaper clippings, art and photographic equipment, and the artist's library. The property also boasts examples of Couse's paintings from throughout his career. 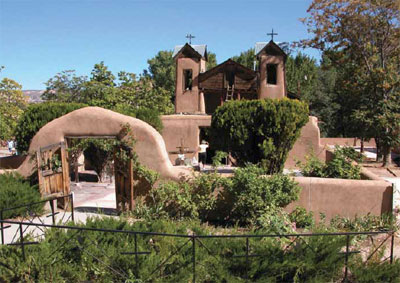 Galleries of all kinds surround the Plaza and all the streets of the town. D. H. Lawrence wrote "I think New Mexico was the greatest experience from the outside world that I have ever had. It certainly changed me forever."