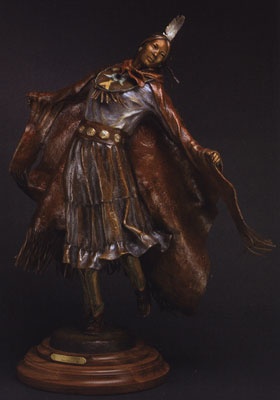 "Susan Kliewer's understanding of her Native American subject mater comes from a long intimate relationship with the people, their land and traditions." - Dr. Mark Sublette

A little piece of Susan Kliewer’s heart goes into each and every sculpture she molds. Based in Sedona, Arizona, this contemporary Southwest sculptor depicts the Navajo people she knew and loved when she managed the Marble Canyon Trading Post for five years on the Navajo reservation.

“My subjects are taken from real life,” says Kliewer. “I lived on the reservation in the 1970s and got to know so many great people. I care for these people so much. Even my daughter-in-law is Navajo.”

The artist often uses her grandchildren and Native American friends as models to capture the special intimacy that is the hallmark of her work. Her warm sentiments translate to the cowboys and Native Americans she captures in bronze. Kliewer strives to show the common thread that underlies all human experience, as evident in her recent piece titled Shima (Navajo for mother), which masterfully captures the universal unspoken bond between a mother and child. 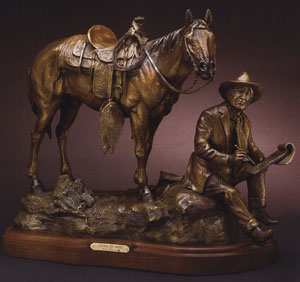 “This young shima gazes lovingly at her baby who is happy and secure in his traditional Navajo cradle board,” explains Kliewer. “I aim to capture and preserve the old ways of their society in a rapidly changing world.”

Kliewer’s depiction of the ways of Native Americans in everyday life, from the past as well as the present, has attracted major collectors from all over the world. Her Dineh series includes Navajo Weaver, which alludes to months spent at the loom producing a Navajo blanket, and Gridlock at Window Rock, which shows a Navajo boy who has been herding his sheep all day and wants nothing more than to get home and have a bowl of mutton stew. Unfortunately the sheep aren’t cooperating.

“This Navajo boy is trying to shoo them but smiling because he finds it amusing,” says Kliewer. 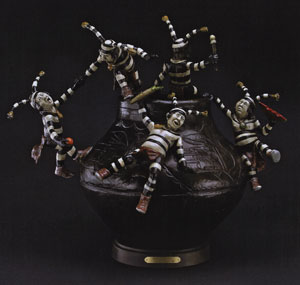 Gridlock at Window Rock, Shima and Navajo Weaver are among 13 two-thirds life-size bronzes that will be going to Na ‘Aina Kai (“Lands by the Sea” in Hawaiian), a non-profit botanical garden in Kauai, Hawaii. Kliewer has been asked to contribute work to its new Navajo family village that will teach children about the Southwest through interrelating sculptures.

Medicine Man Gallery in Tucson boasts an extensive collection of bronzes by Kliewer. Her work has been featured in two gallery’s recent exhibitions, Historic Trading Posts of the West, which runs through March 28, and Geronimo Remembered: A Retrospective 100 Years after his Death, which continues through April 15.

The gallery will spotlight Kliewer’s maquettes throughout April, including up to four never-before-seen pieces. Fresh from the foundry, the bronze titled Navajo Powwow Dancer represents a brighter future for the new generation, while in contrast, Navajo Weaver represents past tradition.

“They are both so different. I enjoy the dancer’s sense of freedom and youth, while the traditional, older woman has lived her life with grace and humor. I think I was successful in capturing these moods,” says Kliewer. “I hope the connection I feel to the figures resonates with viewers.” 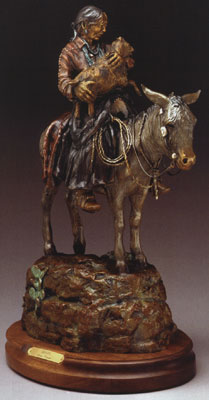