This article is the first in a series titled "Works in Progress," which chronicles the creation of a single piece of art from start to finish. In our March issue, we go on location with artist Joan Marron LaRue as she paints the California landscape en plein air.

The idea of sculpting a portrait of famous potter Maria Montoya Martinez came to Susan Kliewer over lunch with her gallery representatives in Tucson, AZ. It was last May, and Medicine Man Gallery president J. Mark Sublette was talking excitedly about the Maria pottery to be exhibited at his Santa Fe gallery during the August Indian Market. 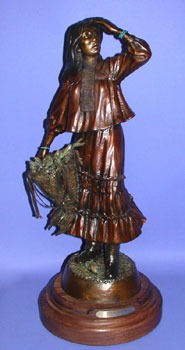 Conversation turned to a related topic: Wouldn't it be great to do a sculpture of Maria? To their knowledge, no one had done such a piece. "I didn't know much about Maria at the time except that she made beautiful pottery," Kliewer says. "But I thought a tribute to such a strong, unique artist would be a great idea."

Kliewer returned to her Sedona studio and gathered old photographs and books to research the life of Maria Martinez -93, a San Ildefonso Pueblo artist. Known by her first name alone, Maria grew up at a time when traditional pottery was being replaced by inexpensive, commercial cookware and the art of pottery-making was fast disappearing. But as a young, talented potter, Maria was asked to make reproductions of prehistoric polychrome pots for the Museum of New Mexico. She enlisted her husband, Julian, to paint the designs, and they worked together ever after. The couple created a technique for black-on-black pottery that soon became prized internationally. After Julian's death in 1943, Maria collaborated with other family members. Ultimately, she passed along her techniques to a host of San Ildefonso artists who carry on the tradition today.

Kliewer found it appealing to pay tribute to a woman who came from humble beginnings but transformed pottery from a disappearing craft into a respected fine art. "As a young woman, Maria sat out on the sidewalk in front of Santa Fe's Palace of the Governors with her sisters and made pottery," Kliewer says. "Maybe I felt a kinship with her because I worked for 10 years in a foundry before I did my own sculpture."

In the 1970s, Kliewer managed the Marble Canyon trading post, gas station, hotel, restaurant, and grocery store on the Navajo Reservation while painting portraits of Native Americans in her free time. Moving to Sedona in 1979, she convinced Buffalo Bronze Foundry to hire her for "a man's job," where she helped produce bronze sculptures for established artists. Among those sculptors were Joe Beeler, Buck McCain, and Johnny Hampton, who strongly encouraged Kliewer to develop her own talents as a sculptor. She began experimenting with the medium and by 1988 felt confident enough to strike out on her own. Since then, her artistic repertoire has included two monumental figurative sculptures, Sedona and The Sinagua, both on public display in Sedona. 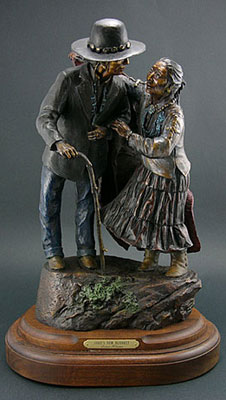 For the sculpture Maria, Kliewer studied numerous photographs. She considered portraying Maria as an old woman but decided instead to show the artist in her 40s, when she was probably at her creative peak. Kliewer especially wanted to capture Maria's strength and serenity. She envisioned Maria sitting on a blanket, surrounded by finished pots and smoothing a new pot with a rock, as seen in some old photographs.

With that concept in mind, Kliewer grabbed a ball of clay and created a 4-inch-tall clay "sketch." The purpose was to work out the composition and ensure that potential problem areas, such as the legs tucked up underneath, appeared natural. "At first I wanted to be able to see her face really well, so I had her looking up as if talking to someone, but that didn't look natural," Kliewer says. "Then I had her looking down at the pot, and it all fell into place. Her hands became the focus-they are a working person's hands, where the knuckles are big and the veins stand out on the back.

"The 'sketch' served as a guideline for building the armature. Made of galvanized plumbing pipe and various gauges of aluminum wire, the armature provides support for the clay. "I use an oil-based clay that never dries out, and the armature is there to hold the piece up while I'm working on it," Kliewer says. "This armature is pretty simple-her arms come out from the body, and they were the main thing to stabilize." Wire used for the arms is thicker than the tiny wire used for fingers, just like bones in the human skeleton.

After completing the armature, Kliewer began to put clay on it. "One thing I always do-and people may think it's silly-is make a little clay heart that looks like a real human heart and put it inside the figure," she says. "It's just a sentimental thing, but it gives the figure a little life and some soul." 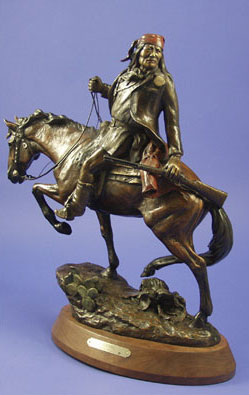 To build a figure, Kliewer starts with the head and proceeds to the nude body, which she later clothes. She uses her fingers and standard sculpting tools. "I want to put the muscles where they go-not getting too detailed but making sure they attach right," she says. "When I do the head, I do a skull first and then add the facial muscles, which makes the head more lifelike. Maria's cheekbones were very prominent, and by sculpting those on the skull, they came through on her face later."

Kliewer knew Maria's traditional, loose-fitting garments would cloak much of the anatomical detail. Even so, she says, "The feeling that you have a real body under there comes across, though it might be very subtle." 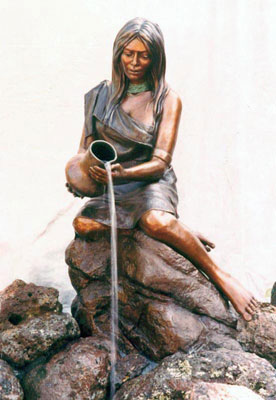 The greatest technical challenge lay in the tiny Maria pots. "I tried to make little coil pots like she did, but they were really crude," Kliewer says. "They were impossible to do without a wheel, which made me realize how skilled Maria was." Kliewer appealed to a potter friend, Steve Scag-nelli, who followed her diagrams and pictures and used a potter's wheel to make an array of tiny pots for her selection.

While sculpting, Kliewer work-ed late into the night. "Working in clay puts you in an altered mental state where you put everything out of your mind that you're worried about or thinking about," she says. "Sometimes you get done and you think, where did that come from? It was that way with this one. I'm sure art is a God-given talent, and if you leave yourself open, the creative force comes through."

Kliewer works the clay until she feels close to being finished. Then she calls the foundry and sets a date to deliver the piece. "Committing to a schedule pushes you to finish the piece but not overwork it," she says.

At the foundry, Maria went first to the mold-maker, who cut off the arms and molded the pieces with silicon rubber. Then plaster was applied outside each rubber mold to make a "mother mold," Kliewer explains.

To make a bronze casting, the foundry painted hot wax inside the rubber mold. This was done in coats until the wax was nearly a quarter-inch thick. After the wax was cool, the mold was taken apart and the wax removed. The wax worker touched up the wax by taking out seam lines and reattaching the arms. Gates, or sprues, were attached to provide channels for the bronze to flow into the piece. 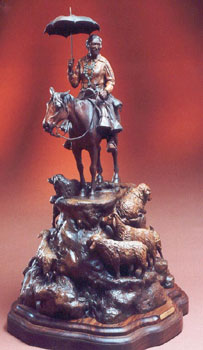 Next the gated wax piece went to the slurry room, where it was dipped into vats of slurry (a silica-based solution), dusted with silica sand, and allowed to dry. This process was repeated with another coat every day for eight days. The result was a ceramic shell that covered the inside and outside surfaces of the wax like a sandwich.

Then the ceramic shell was placed in a furnace and heated to completely melt out the wax. Bronze pouring came next. The foundry heated the bronze to 2,200 degrees in a large furnace and heated the ceramic shell to the same temperature. The shell was placed upside down in a box of sand, and molten bronze was poured into the shell.

After the piece cooled, the ceramic shell was chiseled away and sandblasted. Then came the chasing process of welding and grinding. The gates, now bronze, were cut off and the surface of the bronze retextured. Little spots and holes were fixed, followed by a final sandblasting. To apply the rich, classic patina, the bronze was heated with a torch, and oxidizing chemicals were applied. A coat of paste wax sealed in the color.

Kliewer sold several pre-casts at Maria's debut at the Santa Fe Indian Market, and interest has been expressed in a monumental version. She is excited about the idea. "I would love to see it in New Mexico where Maria lived." 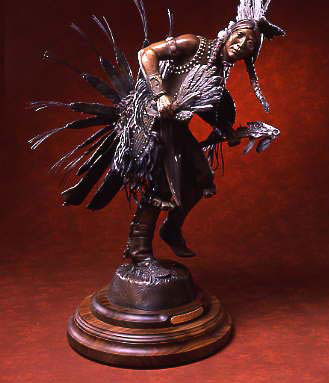