Colorado painter Stephen C. Datz, like most landscape painters, is most at peace in front of the easel and out within nature. For his newest show, opening November I7 at Mark Sublette Medicine Man Gallery in Tucson, Arizona, the artist has painted some of his favorite locations in the United States — scenery that includes destinations in Utah, Colorado, Arizona and other locations in the Southwest. But instead of painting the hits of these destinations, Datz has turned his attention to some notable B-sides.

“I’ve chosen views that I've not looked at before. The more you look at places the more you get to know them, and the more you don't really see them at first glance anymore,” he says. “So for this show I wanted to focus on areas I've not painted before, places that have called out to me over the years. These less well-known areas might not be as recognizable, but they are just as stunning.”

In Ancient Ways, the painter turns his eye to Canyon de Chelly, a popular painting in Northern Arizona known for its tall canyon walls formed into tight S-shaped curves. While many artists have focused on these dramatic cliff faces, Datz focuses on the flat canyon floor and a dry creek bed that runs through it alongside trees with autumn leaves. The cliffs can be seen in the image, but as a secondary element that guides the viewers’ eyes through the top of the image.

“This past fall was my first trip to Canyon de Chelly. I had always heard from people and other artists about how beautiful it was, but We never been able to go. So when the calendars, or maybe it was the stars, started lining up I made time to go and see it,” he says. “It’s unusual in that it’s a fairly wide-open canyon in many places. When I was there I really challenged myself to find new views, or even familiar views that I hadn't seen done before. I was struck by how busy the traffic was in the canyon. There are Jeep tours and horseback tours, and also farmers who have parcels of farm land in the canyon. It's still a very active place.”

With other works, Datz focuses on the qualityof light, especially in Pillar of Community and Natural Geometry, both of which feature early- evening light that makes red rocks glow with a shimmering clarity. “I painted Natural Geometry not far from where I live her in Grand Junction, Colorado. Because the air is so dry, the winter light is very crisp and clear. It has a quality that is definitely different than summer. It's bright, but it doesn't blaze, and everything reacts very different under it,” he says, adding that he often chooses compositions that exemplify interesting shapes found naturally in the wild. “With that one, I loved the way the rocks are kind of cleaved and cracked in very particular ways. There is a pattern, a geometric order, to everything that really fascinates me.” 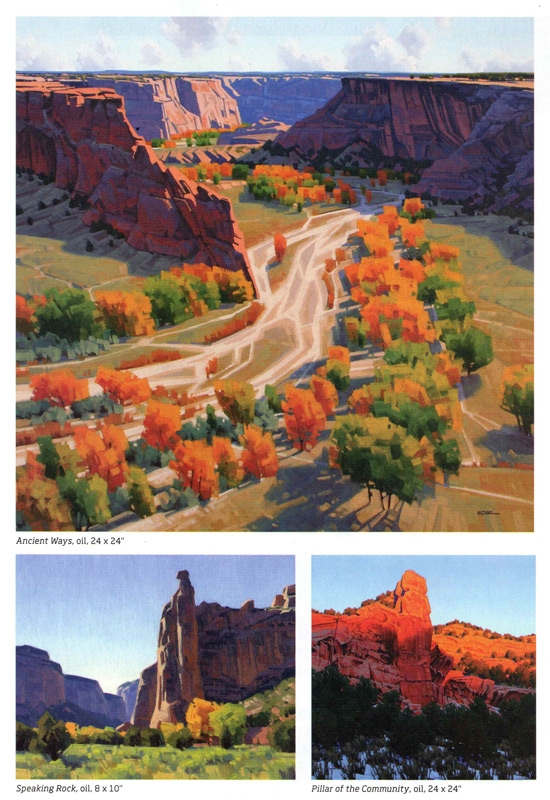