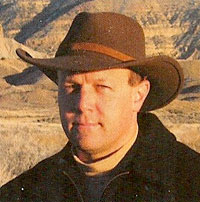 "I'm a complete nut for snow!" exclaims landscape painter Stephen C. Datz. "I love winter's distinctive beauty, its moods, the character of its light. At times it's so cold that vapor crystallizes, and the air literally sparkles." Datz has an uncommon ability to portray winter's characteristics on canvas, particularly the cool, prismatic rainbow hues found in snow and ice. He strives to imbue his paintings with "an implicit sense of solitude and silent contemplation," inviting viewers to also occupy that space, that moment. All alone in the wilderness, winter's transcendent hush holds him in thrall. 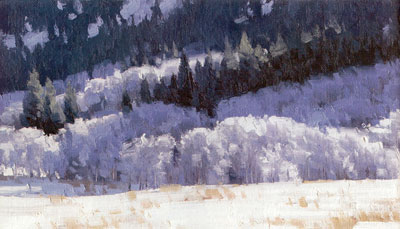 Datz's affinity for snow is immediately apparent in Frosted, a scene Datz spotted while driving along U. S. Highway 50 between Gunnison and Montrose, CO. "On this particularly cold day," he relates, "early fog had left an amazing hoarfrost on the trees - some of the crystals were over an inch long! The landscape was transformed into a fairyland of blues and whites. The seeming simplicity of the painting's color harmony belies the difficulty of translating the scene accurately." But translate it he did, his small, bold brush strokes conveying an icy energy. 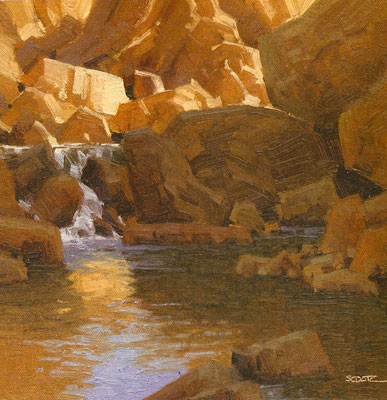 Although he holds a special fondness for winter in the high country, Datz enjoys traveling, exploring, and painting wild places wherever he goes. He fell passionately in love with Utah's dramatic canyons on his first backpacking trip there. Growing up in northern Colorado's suburbs, the artist hadn't had much wilderness exposure until his wife, Andrea, a lifelong outdoorswoman, convinced him to take a week's vacation in Escalante. Waking before sunrise, Datz unzipped the tent flap and peered outside. All around him the land slowly became suffused with a crimson glow as the rising sun crept higher, lighting the land, bringing its definitive shapes into sharp relief. "It was my first dose of how sublime nature can be - and it was a week of revelations. Something just clicked. The morphology of the rocks, the shapes and forms that had been honed by nature's hand. When I'm out painting, I often recapture some sense of that first experience and how it profoundly affected me. My hope is that my connection to these wild places come through, that viewers of my art get some hint of the wonder I experience there." 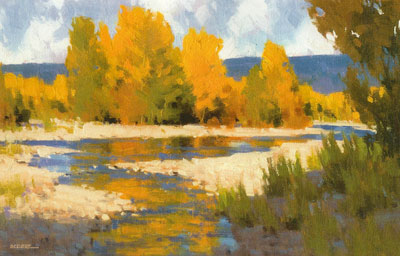 As a boy, however, it was not at all certain that Datz would follow a career in art. Two incongruous threads wove through his youth. As early as third or fourth grade, aptitude tests steered him toward advanced placement, and he excelled at math and science. At the same time, drawing was second nature to him, and his art teachers constantly encouraged him. In high school he became the school newspaper's staff artist and cartoonist. Outside of school he was an avid Star Wars, science fiction, and fantasy fan. He became the go-to guy for drawing Dungeons & Dragons characters for every kid in his neighborhood. But he thought of these things as just something fun to do.

When it came time to go to college, Datz planned to major in applied mathematics. He survived a rigorous qualification process to gain acceptance at Carnegie Mellon University. But within one semester, he realized it was not where he belonged - just because you can do something doesn't mean you have to do it. Art beckoned, and Datz came back to Colorado and enrolled in the arts program at Colorado State University. It was a time when schools were emphasizing abstraction, graffiti, and so-called "modernism" - none of which appealed to Datz. Instead, he focused on figure drawing, design, and illustration, graduating with a bachelor of fine arts degree in 1992. He set his sights on becoming a fine artist.

Datz's father had attended Denver University and there became acquainted with Skip Whitcomb, a well-known Colorado plein-air painter, draftsman, and printmaker. His father encouraged Datz to attend a Whitcomb workshop, which proved to be a critical turning point for the young artist. Whitcomb introduced Datz to the practice of plein-air painting and the medium of oils. Says Datz, "He opened my eyes to an art world I had never glimpsed in college - a world of artists both in America and abroad who had continued in the traditional ways of painting long after the so-called modernism of the early 20th century had taken root."

The die was cast, and Datz began painting outdoors in all seasons and all weather. Scarcely a day went by without him producing at least one field sketch. He took additional workshops with Whitcomb and with artists Ned Jacob and Michael Lynch. Among artists whose work he deeply admires are Andrew Wyeth, whose "compositions, color harmony, and ability to portray moods are second to none"; Maynard Dixon, whose "unique, straightforward sense of design and shape" is "absolutely enchanting"; early Taos painter E. Martin Hennings' technique of sophisticated compositions; and the inspiring art of California Impressionist William Wendt. 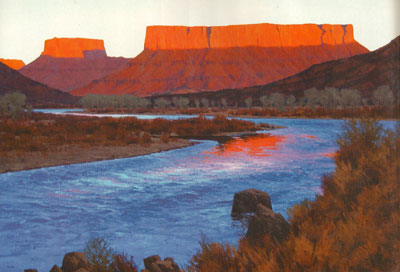 In the field, Datz takes his time to settle on the composition or scene. He allows himself to be open to his surroundings and, soon, ideas begin to take shape. Then he begins sketching, digging beyond his initial impressions, and making choices with a discerning eye. His small field studies then proceed fairly quickly. Back in his studio, his studies, photographs, and notes made on location serve as catalysts for larger paintings.

Datz and his wife make their home on 9.5 acres along the Colorado Rockies' western slope, where Andrea conducts her integrative horsemanship business, working with owners and horses to promote better mutual communication, nutrition, and understanding. A large separate building houses the artist's 18-by-20-foot studio. Its high ceilings and northern light provide a perfect, no-nonsense work environment for Datz, allowing him to spread out, mix paint on one of the two Plexiglas-covered palette "tables," and organize stacks of slides, photos, and other reference materials. Art books and supplies fill bookcases, and steel shelves hold 800 to 900 field studies. 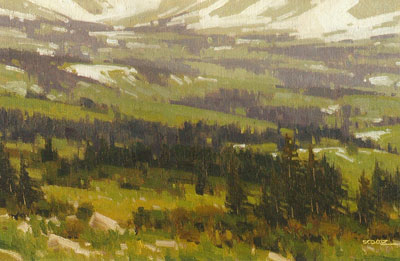 At eye level behind his two easels, the wall is papered with sheets of inspirational quotes. On any given day, a glance at the wall reminds Datz of the words he lives by. Among his favorites is one from Edward Abbey; "The landscape, like a man or a woman, acquires character through time and endurance." It is this essential quality of nature that Datz explores in his paintings.

Among Datz's strengths as an artist are his ability to discern the key shapes and patterns within any scene, and to bring them together in remarkable color harmony, a mastery developed from years of working with only four colors plus white. Today he's added a few - his palette contains 10 colors plus white. "The way the land is put together is what attracts me to it as subject matter. I'm looking at structure, lights and darks, seeing elements rather than narrative. I feel this leaves more space for viewers to bring their own stories into play." He strives to record what moves him personally, to say, "This is what I saw - how beautiful is that!"

Back in the canyon country of southeast Utah, which has remained a favorite place to paint, Datz recently came upon a winter sunset in Professor Valley that literally took his breath away. The finished painting, Time is a River, audaciously displays how wind and water act to sculpt rock and sandstone over millennia. The mesa's bold blaze of fiery, incandescent energy pierces the sky while, beneath it, the quiet, relentless flow of the river has its way with the land. 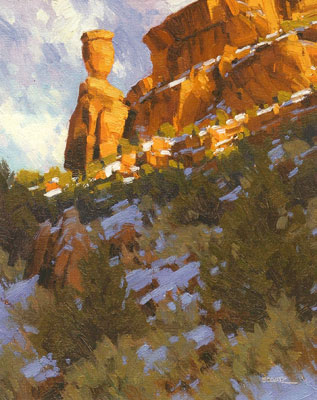 Over the past two decades, Datz has received growing recognition. Coming up this fall is a show at Medicine Man Gallery in Tucson, AZ with many other events in between. In 2010 the artist won Best of Show at the 41st annual Mountain Oyster Club Art Show, and he was honored with an Award of Excellence at the Rocky Mountain Plein Air Painters national show.

Art can be a means of making sense of the world, and Datz's paintings bring us closer to that understanding. To him the landscape is alive and vibrant, with a melody all its own and "an intrinsic beauty and value that cannot be ignored." His paintings are "pauses along the road, meaningful moments that my life has given form." It's a journey to keep an eye on - the view promises to be magnificent."