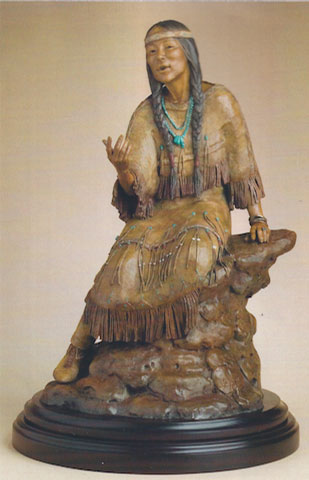 "TeAta was a Native American, who performed in the early 1900s.  She was best known for the play she wrote and performed that told of the history and culture of her tribe.  It became widely renowned, and she traveled all over the world, telling the story of her people in front of audiences that included kings and queens."

Star York’s sculptures have earned her an enviable reputation as a talented artist, whose works are a delightful combination of composition and color.  Whether she is depicting people or animals, she is driven to create renditions that are anatomically accurate and aesthetically appealing.   Her success in accomplishing both is evident in impressive sales and loyal collectors.

York comes from a long line of creative people.  Her mother was a ballerina “and a romantic,” she says, who was a dancer in New York in the ‘30s and later worked at a dance studio.  York’s father was an engineer by trade and a woodworker in his spare time.

“Every night he went into the studio and built things, like furniture,” York says.  “He was creating with his hands. He also had built sets for the stages for the dance studio.  He would give me big slabs of wood, and I would draw on them and cut little figures with the jigsaw.  I was five or six then.

Those creative genes go back at least another generation.  “My grandfather was an inventor and built the house I grew up in,” York says.  “He had a patent on the house, which was built with no nails.”

Growing up in a rural area of Maryland, York also collected animals – ducks, rabbits, and chickens.  When she was a teenager,  she and her sister pooled their babysitting money and bought a horse that York rode in barrel races and at rodeos.  She wnet on to spend almost two decades training and raising horses and currently has six.  “I also have a couple of goats and dogs and cats,” she says.

Today York is living on a ranch near Santa Fe, New Mexico, with her husband Jeff Brock, who she met after she moved to Santa Fe to be near her foundry.  “He had had an electrical contracting company in Michigan, but always wanted to be an artist, so he moved to Santa Fe and worked for the guy who made my enlargements,” she says, adding that today he makes jewelry, works with her on her monuments, and also holds five world records in land speed racing. 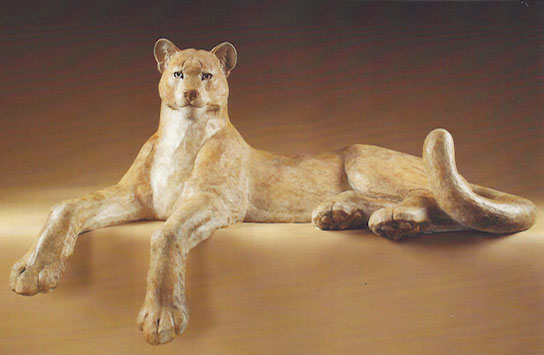 "The expression on this mountain lion comes from our big catm who loves to stretch out on his favorite rock, proudly surveying his domain."

“We’ve been married for 11 years and live in Abiquiu, Georgie O’Keefe country.  We’re right on the river, have a pasture for our horses, and a national forest right here.”  She laughs when asked about the origin of the ranch’s name – Pair O’Dice – and quickly attributes it to Brock and his quirky sense of humor.  It’s the perfect setting for artists, who work in a studio they built near the house several years ago.

York began selling her silver miniatures through a gallery in Annapolis immediately after graduating from high school and went on to study art at the University of Maryland.  “I had enough credits to graduate but they didn’t give me a diploma, because I had too many [unpaid] parking tickets,” York says, adding that the infringements came often, as she parked illegally in order to lessen the distance she had to haul her art supplies and projects to where she needed them to be.  “I needed the money more than I needed the degree,” she adds with a laugh.

While in college, York also took classes at other schools, including the Institute of Art in Baltimore and the Corcoran College of Art & Design in Washington, D.C, in order, she says, to get a well-rounded education by studying with various instructors.  “I would take off a semester and go to a different school,” she says.  Although she had received a full scholarship to the University of Maryland, York was in a car accident when she was 19 and, because she was required to take a full credit load in order to retain the scholarship, she had to let it go and work part-time in order to pay for her schooling. 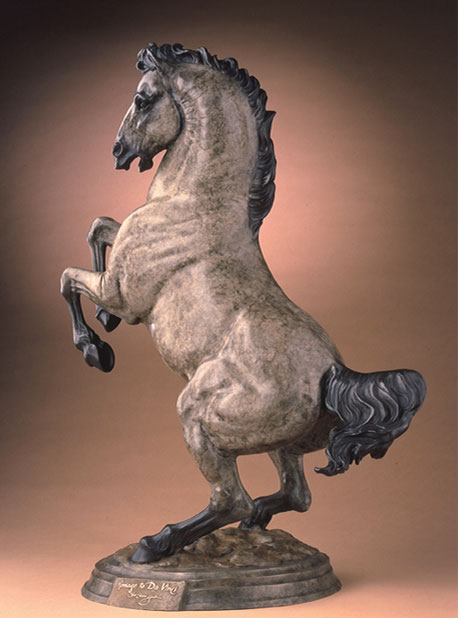 "Leonardo DaVinci sculpted few horses in his life, but did a series of beautiful drawings of horses, some of which were sketches for battle senes.  He was able to capture the warhorse's expression, reflecting the expression of the face of the soldier riding him, an accurate observation of how horses can become true extensions of their riders.  this certainly is my experience with my own horses, and so I was inspired to sculpt this."

After completing her studies, York taught metal design at a community college for two years, then left the classroom behind. “I realized it was difficult to be agood artist and a good teacher,” she says.  “Teaching was great, because the students weren’t kids; they were adults who came back to learn about art because they loved it.  But I didn’t have the energy to put into my own art and to be as good as I wanted to be.”

Sales were good immediately, York says, and she found herself wanting to do larger pieces and began to search for a foundry that could cast them.  “I found one in Santa Fe, and we moved here in 1985,” she says.  “I was selling pretty well in Maryland but, when I got a gallery in Taos, we sold just one little piece the first year.  But, within five years, I was that gallery’s best-selling artist.”

York received a real eye-opener one day while lunching with the gallery owners.  “They said that, when they bought the gallery, the former owner warned them not to take on women artists, because they didn’t sell well,” she recalls.  “As long as I didn’t show up [to a show] I could sell well.  People either wanted me to be a man or an Indian.”  Thankfully, those days are long past, as women artists, including York, have earned their places among the best Western artists in the world.

This sculpture depicts a rancher who has come upon a n unbranded cow while riding the range and is trhying to get af ire going to brand the maverick.  As can be typical the weather is not cooperating, as blustery winds bring drizzling raon, and he shelters the struggling embers with his slicker.  Despite the adverse conditions, his expression shows the love of his work.  'The highest reward for a man's toil is not what he gets for it, but what he becomes by it' - John Ruskin"

York’s early pieces were miniatures, what she describes as “very dynamic compositions with fantasy creatures and action.  My first few bronzes were about 10” high in the Russell and Remington genre, but that really wasn’t what interested me most,” she says.  “I like to work on moments that are more contemplative, finding that still place in someone I was impressed by, like the people I met on a reservation.  There was something about them that touched me, something about the core of inner peace and feeling right with the world, and I wanted to explore that.”

York’s inspiration, she says, usually is the result of something she experiences.  That was the case with a medicine woman she met during a Native American ceremony several years ago.

“She stuck with me,” York says.  “Maybe six years later, her face and her person had stayed in my mind, so I started to research the Navajo facial structure,” York says.  “I don’t like copying from models or photos, because then it’s more like a study.  I want to pull up what’s inside me.  It’s a way of learning about myself.  Just copying won’t have the heart or be as rewarding as to pull up from the inside what is important to you.  The work takes on a life of its own, and I become the vessel; it comes out of my hand.” 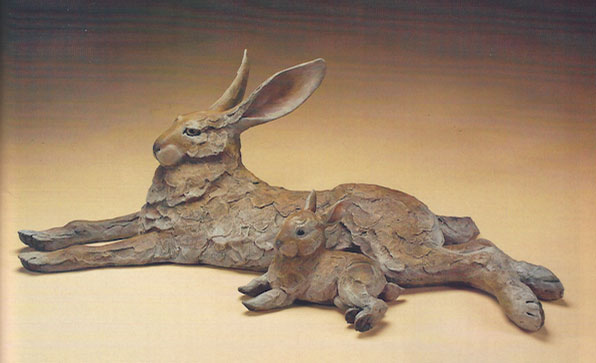 "We have very big, well-fed jackrabbits who inhabit our ranch, and we often see them relaxing around.  Even the baby jacks seem to know our dogs don't post much of a threat and imitate the adult's relaxed attitude." 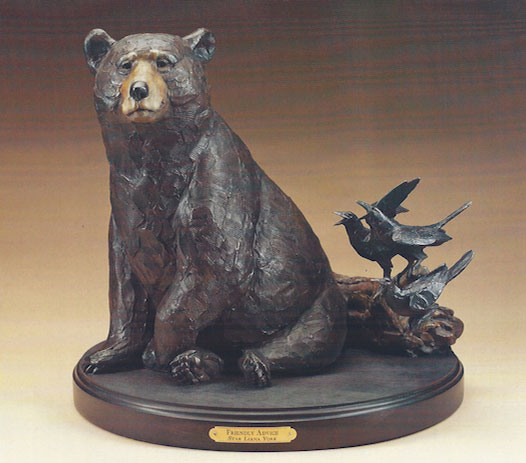 "This sculpture is part of a series I've titled The Raven Dialogs.  I've been entertained for years by our resident ravents' interactio with our dogs before visiting a black bear refuge, where I saw the same amusing relationship between the raens and bears."

Today, much of York’s work revolves around animals.  “I’ve gotten more into wildlife, and I’m enjoying that,” she says.  “I like to show the personality and individualism I see in wildlife; I like to show character.  I like to do a piece with the inner dynamic rather than just an explosive composition.”

York started doing monuments in the late 80’s, and is known for the color she uses in her pieces.  “The West is so colorful, literally and figuratively, that it just seemed important to use color to bring my work alive,” she says.  “Even the shoe brown is a patina, just like the colors I add.  To me, color brings it alive.”

York started selling her work at outdoor art shows, when she first moved to the Southwest. Her first major show was the National Sculpture Society Exhibition in 1978. That year, and the next she won the Best Miniature Award.  Today she participates in several shows each year, including Cowgirl Up!, and in fundraisers for a horse shelter and an animal shelter.  “I like the idea of giving back,” she says.

Unlike most sculptors, York does not begin work on her pieces by first drawing them.  Instead, she composes in her mind.  “When I draw on paper, I’m drawing a two-dimensional plane,” she says.  “If I turn it around in my head, when I start the piece I can see how it will evolve.  I don’t want to fall into a formula.  That can work in terms of sales, but then all you’re doing is the same thing; you’re not engaging your mind or creativity.

“I try to do something new and different with each piece, which is why I do so many different styles.  I need to keep my mind challenged and engaged, which makes it exciting.” 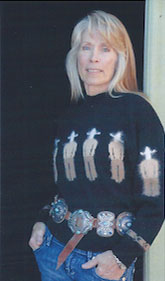 Vicki Stavig is editor of Art of the West