A few years ago, with nothing more than a map sketched on a rumpled paper napkin, my husband and I headed into the rugged canyonlands of southeastern Utah. Our destination was the Great Gallery in Horseshoe Canyon, a sandstone amphitheater whose walls are covered with a collection of paintings made by hunter-gatherer peoples some 1,500 years ago. We weren’t sure how long the hike would be – “a few miles,” we’d been told by the petroglyph expert who had drawn the map. However, we had already underestimated the long, bumpy drive across the desert that brought us to the canyon’s rim. Twilight followed us as we made our descent.

Cairns marked the otherwise obscure trail, and the last rays of sunlight intensified the brilliant red rocks. By the time we reached bottom, a rising moon filled the gorge with a muted blue wash, punctuated by huge, dark shadows. It would have been easy to pass beneath the pictographs, missing them entirely, so there were moments when it seemed most sensible to turn back. Yet we continued, and after some time the legendary figures appeared…telling their haunting, magical stories in the surreal light.

Living in the Southwest for a decade has introduced me to countless stores like those found in the prehistoric Canyonlands landscape, as well as those conjured by the landscape of contemporary western American culture. I am enamored with the seemingly unlimited possibilities within the saga of the West and find that I am more prolific than ever. The mythic and heroic aspects of western lifestyles have also affected the way I approach my subjects. 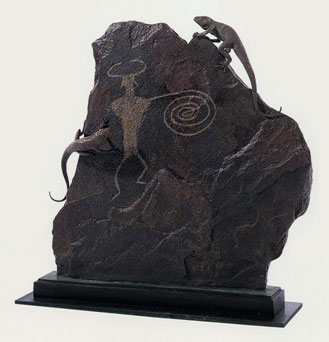 In the early 1980s, my sculptural style could be described as detailed, figurative realism. As I met and experienced westerners and their stories firsthand, however, I evolved from purely illustrative narratives to emotionally charged interpretations. Watching cowboys branding cattle, listening to an elderly rancher tell about her life in the early Wild West shows and observing a private coming-of-age ceremony for a Navajo girl introduced me to personal gestures and expressions that seeded an obsession to recreate the meaning of what I was hearing and seeing. Rather than portraying mere physiognomy, I wanted to reach into the inner soul and display a person’s emotions: whether the anxiety of an Apache mother fleeing danger, the contentment of a Navajo sheepherder who has rescued two orphaned kids of the mischievousness of an ash-painted Pueblo clown.

Discovering and communicating the characteristics that make an individual unique is my greatest personal reward. I have been especially fortunate in this process to view the world through the lens of another culture – a vision that has stimulated intellectual and emotional questions about the work that I do. There is much to be learned from those who have maintained their cultural identities and traditions – people whose lives have been fashioned by hard work that is attuned to the rhythms of the natural world.

But more important is the dignity and inner resourcefulness I find in western American cultures. The strength of character these people radiate manifests the self-confidence that I aspire to myself. When I communicate the universality of such qualities, I discover why I am drawn to a person or animal. 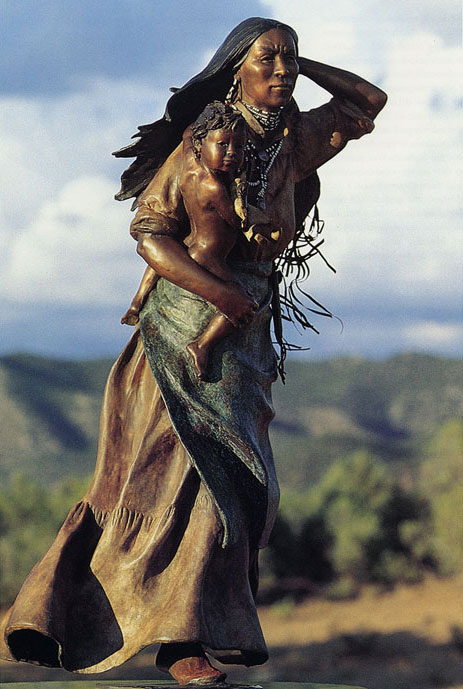 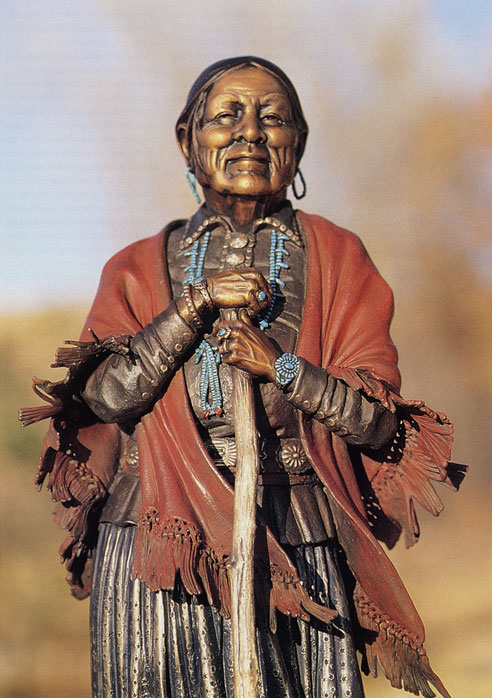 After my initial years of exploring western American subject matter, however, my excitement began to dwindle. I had settled into a particular way of re-creating western imagery – I knew what the sculpture would look like even before I began sculpting. I didn’t know why this was happening, but I seemed to have lost the sense of discovery that is the most exciting part of the art process.

Looking back, I know now that my dilemma arose out of becoming attached to a particular subject matter and style. Which is to say that my art was becoming formulaic, not to mention boring to create. Once an artist settles into a successful style, experimenting and pushing beyond the familiar may not always be comfortable or easy. But such self-consciousness can also be enlightening, turning a period of stagnation or transition into a time of revelation and transformation. This is why I haven’t developed an immediately recognizable style. Instead, I strive for a distinctive point of view that becomes the connecting thread throughout my work.

To get to Star York’s large, circular studio with its wood-beam ceilings and 7-foot windows, you drive a winding road through the Santa Fe National Forest. Dropping down a hilly ravine, you spot a large lichen-covered rock and a dusty drive that leads to the century-old pueblo complex quietly nestled into the high-desert landscape.

Evidence of the outdoors is found withing: Skulls, plants and artifacts decorate the space surrounding York’s sculpture stand in the middle of the room. On this day, the stand holds a clay working model of a kneeling Navajo woman who flips open a newly crafted weaving. The twinkle in the woman’s eyes parallels the joy of her movement and complements the pride she obviously takes in her accomplishment.

York (b.1952), who grew up in the Washington, DC, area, came to this point of creativity, she says, through the nurturance of her mother, a ballerina, and her father, who build the stage sets upon which her mother performed. Her mother’s artistic bent and her father’s love of craftsmanship were inspiration for York’s exploration of woodworking and casting miniature sculptures in high school jewelry class. She learned of the West when she acquired Mack, the Morgan she rode in horse shows and rodeos.

Attending the University of Maryland, working as artist-in-residence at Prince George’s Community College, Largo, MD, and teaching classes in metal design and lost-wax processes were followed by sculpting figures for display in the Smithsonian Institute and for sale through mail-order companies. Along with a penchant for fantasy, York explored western history and fiction in her first sculptures. However, after moving to New Mexico in 1985, fiction was recast into reality and York’s themes expanded to include western genre, wildlife and a series inspired by ancient petroglyphs.