Anatomy of a Sketch

Anatomy of a Sketch

The life work of Maynard Dixon is an investigation of the formal congruencies between the body and the earth. 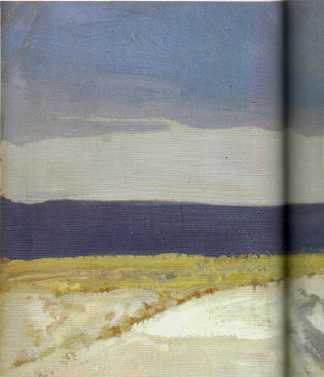 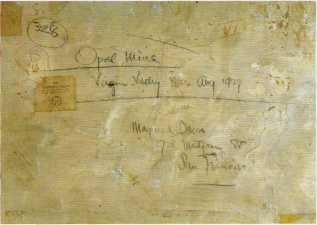 Is there anything new to say about Maynard Dixon? Donald Hagerty has made Dixon the subject of his life's work. Dr. Mark Sublette has covered Dixon's Modernist works, clone by an alter ego under an assumed name. Dixon's marriage to Dorothea Lange, whose photographs etched the sorrows of the American Depression, has been widely studied. The Maynard Dixon Museum in Tucson and the Thunderbird Foundation in Utah are devoted to educating the public about the artist's life and work. Dixon himself wrote many letters and poems that shed light on his artistic aims and inner life. Is there anything left to say?

But if the range and sweep of this complex man's life, thought and work has been subject to careful scrutiny, what remains to challenge the viewer's eye is close reading, the careful consideration of a single work. Not a major work, with all its attendant baggage—who owns it, how much it's worth, where it's been exhibited, which magazine covers have featured it—but a single, simple sketch placed in the context of the artist's career and examined in terms of impulse and style. The question that remains, that persists, in other words, is this: Can we catch Dixon at a particular moment in time, and, looking backwards and forwards from that moment, can we then get a glimpse into Dixon's artistic vision? 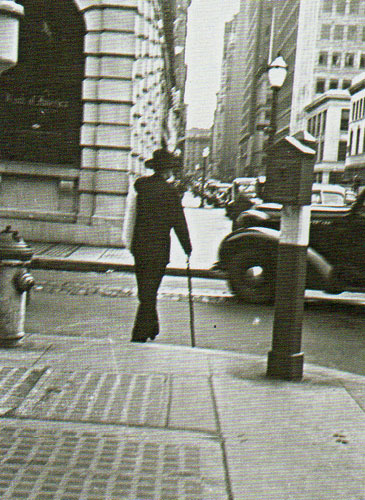 Maynard Dixon on San Francisco Street, circa 1930, carrying a painting and clutching his swordcane.

1927. Maynard Dixon enters an important competition to design a mural for the new Los Angeles library. By a single vote from the library board, Dixon, who had done a number of murals, loses the commission to Dean Cornwell, an artist with no experience in the genre. Dixon believes that the lone dissenter against him is a minion of the publishing tycoon William Randolph Hearst (Dixon had illustrated for Hearst publications and had fled the art-for-hire world years before). Looking to cool down, get some distance from the corruptions of civilization, get into some country, Dixon lit out. Guided by Frank Tobin, a cattleman and ex-peace officer, Dixon headed for northwestern Nevada, a remote area dotted with opal mines. Over a period of four months, the artist rode and sketched his way through this high desert. (Hagerty. The Life of Maynard Dixon, pp. 165-167.

Consider the sketch pictured [above]: Rainbow Ridge. Signed lower left with artist's initials and inscribed "Rainbow Ridge, Nev. Aug. 1927." A 10-by-14-inch oil sketch on a panel, the kind of artist's board Dixon might carry in a saddlebag. That alone is worth a moment's pause. This simple artist's board is a blank slate, bumping along in Dixon's saddlebag as he traveled through the loneliest part of what was then a blank slate of a state. Full of potential. Awaiting the great painter's inspiration. Turn the painting over, from recto, to verso. With a small work, when it's in your hand, you do that, automatically. In Dixon's hand you read, "Opal Mine/Virgin Valley Nev. Aug. 1927." Below you read the artist's name and address and you see a sticker, Dixon's sticker, with his address and trademark thunderbird. Other numbers and marks might indicate exhibitions or collections or framer's notes. August. He wrote it twice, recto and verso. Hagerty's evidence variously suggests that Dixon left for Nevada sometime in the summer or perhaps not until October. Did he depart in summer and sign these works later, forgetting the month? Was August the cruel month when Cornwell beat him out; was it always August in his mind until he got that bitter taste out of his mouth? Did he do the work in August, thinking about Nevada; did it spur him on his way? That would negate the romance of the saddlebag but would loom large—a painting inspiring a trip? Perhaps, but the work looks and feels like a field sketch, a painting done on-site, en plein air. Rainbow Ridge lends weight to the summer departure but there is a mystery here, a little lost detail, one for biographers and historians. Rainbow Ridge, from bottom to top. The foreground, closest to us, is uneven, rocky, depicted in a fast but unmistakably Impressionist style.

There are hints of pointilIism, too; an array of browns and green browns juxtaposed with dots and small flourishes of the lavender grays that dominate the sky that help to unify the whole. Dragged dots of putty gray delineate the foreground from the layers that sit atop it, further into the distance. Sand, in deep desert tans, banded and windswept, leads to the beginnings of rocks and forms carved out by cast shadows. These broader strokes as horizontals switch to verticals and the diagonals at the right, the man-made road down the mouth of the mine, suggest Post- Impressionism. Passing over the mine for the moment—the better to see what encases it, what swaddles it—the yellow ochre above, back to a pure horizontal line of paint dragged across the panel, seems vegetative, yellow monkey flowers perhaps, in late summer or early autumn bloom. Above that, the most singular element in the sketch, a dark blue to purple mesa in the distance, its peak a hook like a shark fin or the curl of a wave on a dark ocean. It's a shadow that hangs over the picture, looming like the long face of a supine, sleeping god. Sky, saturated with dusty light, peers out beneath brooding clouds that sit heavily on top of the scene, accumulating in a suggestion of rain. Stone, stone blasted into sand, flowers, a looming spirit, a dusty eye of light, rain: the ridge and the mine it contains are compressed between layers of life and death, cycles of seasons and eons. The air of the piece is funereal. Rainbow Ridge itself is fleshy, the half- buried body of a giant. The outlined ridge is like a spine; shadows highlight the creases o f skin where hips meet torso and knees are drawn up and in. The opening of the mine, the man-made adit—the darkest part of the painting—is not quite square, a purely functional entrance, alluding to the miners' haste to get at the fire opals in the bowels of the ridge. Through this portal, this stigmata, the jewels will be wrested, taken from one body to adorn and bedizen others. 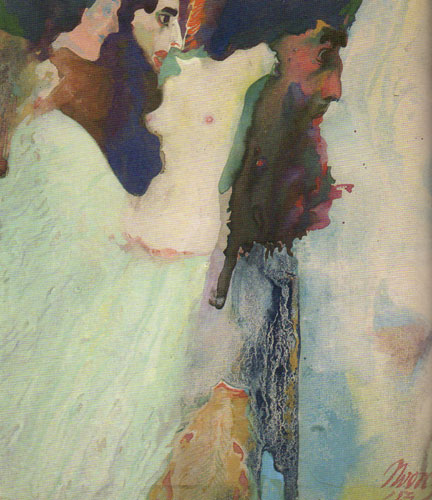 Maynard Dixon had a secret, an alter ego that remained undiscovered until after his death. A tireless student of art, Dixon was acutely aware of the Modernist movement in the early 20th century with its emphasis on the expression of internal, psychological states and the rejection of representation and the traditional methods artists employed to achieve realistic effects. Without subscribing to any of the new "isms," Dixon didn't hesitate to adapt them to his own purposes. But then a box of Dixon's paintings was discovered, paintings completely at odds with what we thought we knew: works filled with bodies and demons, violence and raw sexuality, and wild transformations. Dixon signed them "Nvorczk," as if he had an avantgarde doppelganger somewhere in Eastern Europe, in Prague or Berlin or Moscow.

A look at one of the Nvorczk paintings illuminates Rainbow Ridge. Nude, c. 1923, is a small gouache. Like a jigsaw puzzle or something out of Escher or Rorschach, the nude torso of a woman fills the space between two bearded faces—one a man, the other possibly a bearded lady. A woman's face, perhaps severed from the torso, smiles at upper left. Heads of animals jut into the picture: a pig or cow bottom center, a rat beneath the woman's head, a horse in the man's beard. Now, if you are reading this article, turn the magazine so the faces point up. Clouds fill a sky. A landscape of rocks and mesas takes the eye to a far horizon. A piece of a pond or lake juts out. The man's profile and beard resemble the shark fin in Rainbow Ridge. The white light flows from the torso onto the foreground, a life force spilling out of the woman—Mother Nature, Mother Earth—onto a thirsty desert floodplain.

Where Modernism sought inspiration in the urban, the mechanical, the psychological, Dixon's ambition was the fusion of the physical—that is, the physical human form—with the natural—that is, the geological and meteorological. His life's work is an investigation of the formal congruencies between the body and the earth. Dixon's paintings ask again and again: what structures are common to our temporal, temporary bodies, and the eternal rocks and skies in his beloved West? What do these common structures say about the enduring works and spirit of humanity?

To check this thesis, consider the other, more major canvases illustrated here: Canon del Muerto— Coronado Rock and Red Butte, a 1935 mural study. The rocks abound in faces, profiles, human forms shouldering themselves up through the earth's crust. They are expressionless idols, judging 'the tiny figures that move beneath them without betraying their verdict. They are beyond our ken. 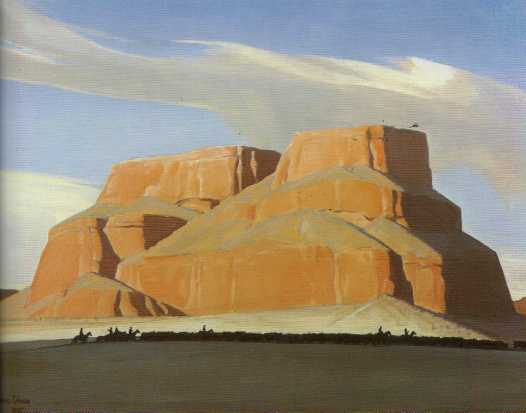 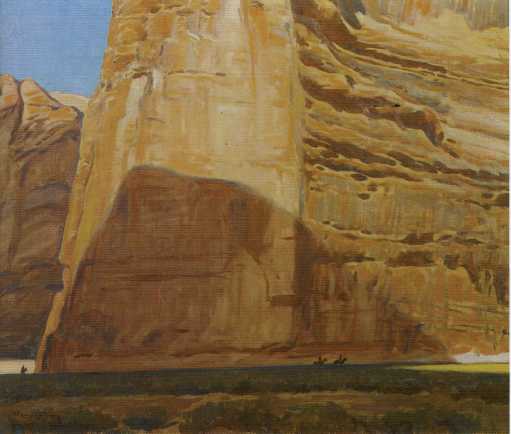 In the 1940 Self-Portrait Dixon casts himself as one of the faces in the rocks. Like one of those composite photos of thousands of faces, his expression is neutral— he looks away; he is not dispassionate, but weary with the weight of felt emotion. 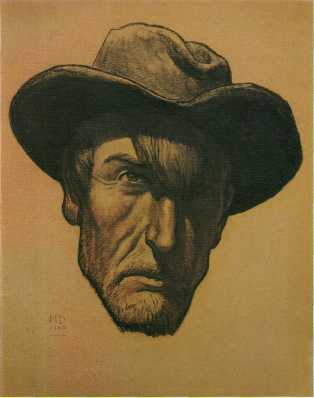 In 1923, the year he painted the Nvorczk Nude, Maynard Dixon published a small run of his own verse. One poem is particularly revealing about Dixon's preoccupation with the forms of humankind and the forms and forces of nature:

There on the hill

The skies pass over you,

The grey rain veils you...

The anatomy of a sketch can reveal the soul an artist.

About James D. Balestrieri
Jim Balestrieri is director o f J. N. Bartfield Calleries in New York City. He also writes the Scottsdale Art Auction catalogue and, during the sale, can be found screaming out phone bids.  Jim has written plays, verse, prose, and screenplays. He has degrees from Columbia and Marquette Universities, attended the American Film Institute and has an MFA in Playwriting from Carnegie-Mellon. He has an excellent wife and three enthusiastic children who, he insists, will work in finance or science, though they are taking an unhealthy interest in the arts.