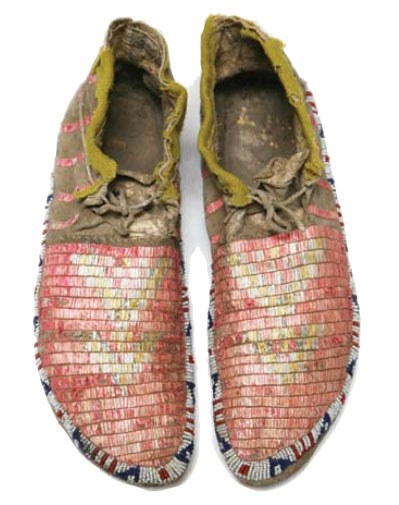 Rated “8” Best (-): These quilled deerskin moccasins, measuring 3.5” across and 10.5” long, date to the late 1880s, the Native American Reservation Period. They are brain-tanned, processed with oils from deer or buffalo brains, rendered satin-soft. Their uppers, boasting dramatic, bright pink, aniline-dyed, cross-striped quillwork, feature centralized patterns of large, triangular stepped yellow and blue “tipis,” a common Sioux motif. Narrow, pink quillwork strips run up their sides, and sinews tame their delicately stitched tongues. Cuffs are rimmed with decorative strips of yellow, machine-made trade cloth, now tattered – but once a Native American status symbol. These moccasins are edged with bands of rose-red, white and blue “pony” beads. Their soles are smooth, showing little wear. Perhaps these shimmering beauties were worn on special occasions like powwows or tribal rituals. Though these moccasins feature many desirable aspects, including ne quillwork and complimentary beaded design, Sublette notes that they are not in pristine condition. So he rates them as an 8, just below Best. “But these would be a great choice for a collector looking for a nice 1880’s example without breaking the bank.”

Native American tribes crafted moccasins, exible shoes of soft, tanned hides in distinctive shapes, styles and designs, for everyday and ceremonial use. Most were assembled with the overcast whipstitch that drew deer, moose, elk or buffalo sinews through holes punched with bone awls. Though all construction techniques were similar, moccasin materials varied according to availability and differing terrains. Eastern tribes, for example, roamed leaf and pine needle covered woodlands in soft sole, pucker- toe moccasins, often shaped from single pieces of leather. Tribes like the Sioux, who lived across the Great Plains, favored hard sole, rawhide moccasins, which, though difficult to work, offered protection from rough prairie grasses.

Through the mid-1880s, quillwork ornamentation was widespread through the Great Lakes and Northern Plains regions, the natural habitat of the porcupine, also known as prickle pig.
Sioux women, masters of this unique Native American skill, initially softened the quills by holding them in their mouth, much like seamstresses hold pins. To create designs that lay at, some then held their barbed ends between their teeth, running thumb-and-fingers down their hollow shafts. Others, after trimming the barbs, pulled the quills between their teeth or pressed them at with polished antlers or bone. Then quickly, before they dried and stiffened, they stitched, wrapped, folded, plaited, twisted or wove them into desired designs. 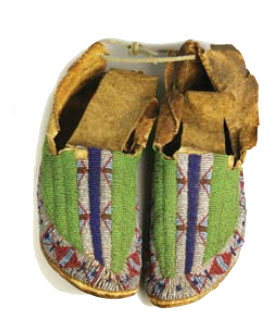 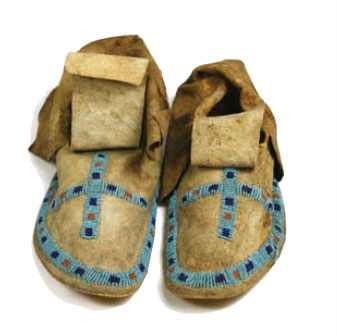 Rated “6.5 – 7” Good: These hard-sole, brain-tanned deer skin moccasins, 10” long and 3.75” at their widest point, date from about 1900, the mid-Native American Reservation Period. They feature strong, central Sioux-cross motifs realized in periwinkle blue Czechoslovakian trade seed beads accented with small, symmetrical, alternating dark blue and red squares. Though matching bands rim their scuffed, cracked soles, a considerable portion of these uppers remain unadorned. Their straight cut high cuffs, which offer protection from sand and dirt, remain unadorned as well. “Though they are in excellent condition, are fairly supple, and show very little bead loss and wear,” Sublette notes,“their minimal beadwork design lacks some of the pizzazz of the other two pairs.”

When white traders on ponies introduced large, irregular, soft hued, opaque Venetian beads in the early 1800s, Sioux women combined them with quillwork designs. Later, they created quillwork-style bars, diamonds, triangles and squares with “pony” beads. In the 1840s, Czech trade beads came into use. These “seed” beads were considerably smaller, rounder and more varied in size than “pony” beads and they allowed easier coverage of broad areas, as well as the creation of more intricate designs. White, blue, green, rose-reds and greasy yellow (think rancid butter) were favorite colors.