Shonto Begay: Honoring the Past - Painting the Present

For Native American artist Shonto Begay, painting is about so much more than art. “I paint my own truth rather than painting beautiful saguaros. I’ve always painted for me, it’s a fun way of pursuing my own vision, my own life. It was a part of my life that needed a voice. It’s therapeutic for me. It helps me define my own stories, finish up my own autobiography, so to speak. The paintings I do are a ceremony for me. A ritual. A celebration of life, of moments.”

Begay’s Navajo heritage is the driving force behind his work. In fact, his career as an artist took flight largely as a result of his other passion—writing and illustrating children’s books that teach youngsters about his culture. His first published book, Visions and Voices Across the Mesa, introduced his art to a whole new audience. On his first book tour he met many people in the literary and entertainment industries who became some of his biggest fans. 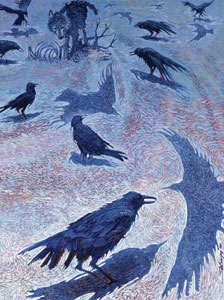 For his new exhibition in conjunction with the Santa Fe Indian Market, Begay uses themes he’s visited before, but in a completely new and different way.

“The use of my grandmother and grandfather is something I come back to in different forms. They are always existing in my work. From a Navajo cultural standpoint I’m using trees—juniper trees and pinion trees—to represent my grandparents in the new works because these trees are so organic and sensuous. They are representative of that continuous evolution. It mimics that flow, generations of storytellers and visionaries. 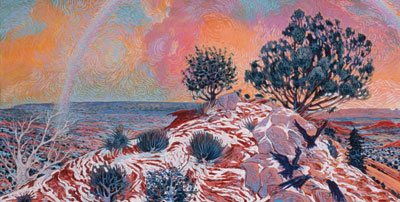 “Right now I’m sort of celebrating the light. I’m using the trees to absorb the light—the whole spring energy—the rejuvenation, the reawakening of life. I’ve been concentrating a lot on the light. Every day we celebrate the morning by placing the corn pollen towards the east right before the sunrise. It places us in the right order for the day. I did this every single morning growing up, and I still do it. It’s a given and as much a ritual for us (the Navajo) as it might be for anyone reaching for their morning espresso and a newspaper. We take that walk of prayer toward the east. And this is the light that I see and that I celebrate in my paintings. 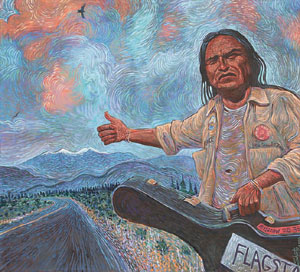 “The works that I have in the show are an overview of places and experiences and stories that I have encountered being a part of this grander, bigger world. It’s a view from within. We are the country’s own forgotten. It’s a stare back in awe.”

In addition to featuring his ancestors, one of Begay’s new works is a panel with five sections.

“It’s an extreme horizontal, 16" x 9' long—and it folds up with a hinge. It’s an image based on a Navajo puberty ceremony. We call it Kin aaldà. It’s a celebration of maturation, of coming of age. The celebration takes place at around thirteen years of age. All my daughters went through that.”

Another piece that will be on display during Begay’s show is one that he says is the most personal work he’s ever done.

“I painted forlorn Navajo kids in boarding school. The kids are depicted in various stages of shock and awe as they see themselves changing—it’s the whole evolution of a culture. When I was in a government boarding school as a kid, things were being educated out of us. Boarding school was about assimilation. We watched a lot of “B” Westerns, and that’s where a lot of our education about ourselves came from. Those were the only two hours out of the whole week that were painless, when we could get lost in a movie, no matter how bad it was. This painting was the moment when those two hours were almost over, when we knew we were going to have to go back to the harshness of boarding school. This work, one of the largest I’ve ever done, is a tribute to those who didn’t make it.”

Begay says that collectors of his art are people who understand the importance of the stories beyond just pretty pictures.

“My collectors have a very, very keen and beautiful sense of taste. They are people who seem to see something very important in the work that pulls them. It’s deeper than just a superficial vision. They say that they see a lot of great work visually on the surface, but this is a work that they find most communicating at a deep, spiritual level.” 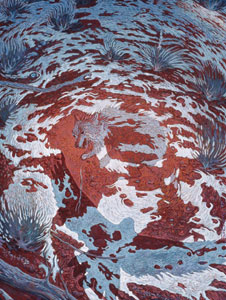 Certainly, as he creates his paintings, Begay is focusing on a vision that goes far beyond the canvas.

“The style in which I paint, the dabs, the lines, the squiggles, dashes and dots. These are syllables that leads to a word; the words lead to a sentence, which leads to a paragraph, which in turn leads to the ancient prayers. This is a beautiful way for me to hold on to these chants, these prayers. It is a way for me to read and say these prayers. For me it is a way of communicating with the Spirits. There is no word in Navajo for art. The beauty that we create is not considered art but a ceremony, a celebration of life.”

Begay is committed not just to creating his own art, but to spreading understanding across cultures of what that art represents. 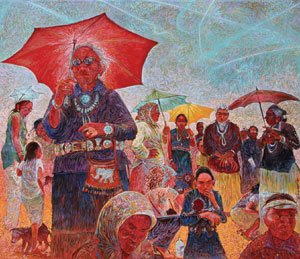 “I work to bring my own art, my own traditions, my own people, to places where they don’t know about us. I go into urban areas like New York City, Birmingham, and Atlanta. I believe in sharing that story and in finding ways to let kids express themselves the same way. It’s what I do as a human being to make myself available as a person of culture, as an artist. To say to others that we are still around, we are more alike than we are different. And through art, the universal language, a lot of us find this out.”