Looking to the Light: Artist Shonto Begay on Finding Inspiration in Dark Times by Ryan Heinsius

Published on February 26, 2009 by Flagstaff Live

Shonto Begay is undeniably one of the Southwest’s most prolific and recognizable artists. As a sometimes-local (he spends a good chunk of time on the Navajo reservation visiting family), his work has become synonymous with both distilling vital elements of Native American culture and identifying the threads that tie all people together.

Born in 1950 on the rez in a hogan without running water or electricity, Begay was shipped off to B.I.A. boarding school as a kid to endure the pains of being torn from his family and way of life. He was one of 16 children in his family, and his father is a medicine man and his mother is a sheepherder and rug weaver. Begay’s ties to his culture and his family are reflected in every single intricate brush stroke he puts down in acrylic on canvas.

Begay attended the Institute of American Indian Arts in New Mexico and the College of Arts and Crafts in Oakland. He worked as a ranger for 10 years in Grand Teton and Grand Canyon National Parks as well as Navajo Monument before committing himself professionally to art in 1983. Begay began painting in 1988 after specializing for several years in watercolor, pen and ink, and colored pencil drawings. He is the author of multiple children’s books and devotes a significant amount of time to instructing children on the path of art (“I don’t teach them how to draw, I teach them how to see,” he says).

The mellow Begay describes himself as a former “incorrigible rebel,” as many of his paintings suggest, and speaks of his art as his “first religion, first gestures of worship.” 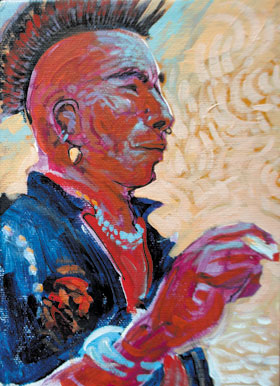 I had the pleasure of talking with the artist in late January as he efficiently worked on a new large piece. The following is an excerpt from our hour-plus conversation.

Ryan Heinsius: One of the most apparent themes in your work is normal people telling regular stories. What is the importance of regular life?

RH: How has the rez influenced you as an artist?

SB: Having grown up there, having been there, having been encapsulated by that horizon all my life. That was pretty much my whole world, so I know that line very intimately. And I go back there, and it’s where my umbilical cord is buried—of course, that’s what ties me to that land. 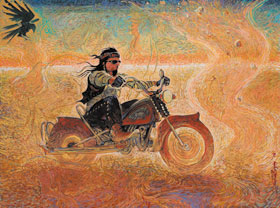 RH: So it grounds you?

SB: The concerns up there are so immediate. As soon as I cross that rez line—I go from county to rez—there seems like there’s a whole shift in paradigm. My concern is, “OK, do the goats have enough feed?” “Do the cows, horses have this and that?” “Are the chickens fed? Dogs?” My mother, my brother. The concerns up there involve supplies and surviving—very, very immediate and very primal. Out here, it’s more like parking tickets, abstract numbers and abstract ideas. I sort of feel like I’m doing some reverse anthropology work.

RH: How does your work change between Flagstaff and the rez?

SB: Being on the rez, I would be totally alone, and it’s good for me. I need that solace. Every time I wake up there and the sun comes over the last mesa and a beautiful valley yawns before me, it’s just like, “Wow, why the hell am I anywhere else?” So that’s my magic place … Here, I have people, I have community. I have a tight community … It’s so beautiful out there I feel I can’t compete with the gods. That’s why I don’t take pictures … (That world is) so intrinsically in my psyche. It’s so imbedded in me that it transcends where I am, the community I’m with or the condition I’m in. I’ll always be between the outhouse here (Begay points to his new “Grandest of Views” hanging on his studio wall. The piece depicts the desert seen from inside a rickety outhouse) and the great warriors. And also bring back the pains of boarding school. Life has given me enough experience that I have so much to draw from. I can be in a beautiful valley and still paint tormented things. 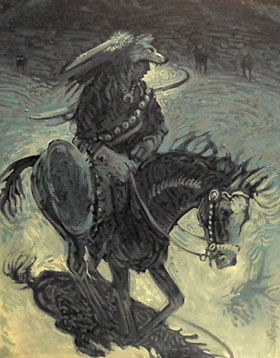 RH: How are pain and celebration linked for you?

SB: If an image or and idea or a memory was so powerful that it cannot be healed, or it couldn’t be confronted, or dealt with in any way, it would be hard to convert onto the canvas. But for me, it’s healing—externalizing those long-imbedded ghosts. Externalizing, exorcizing, all of those things. I think that’s really painting. Each stroke is for me a prayer … Everything I do has to have story … it’s celebratory. Even if that story is not so—it’s also saying “I survived to be able to share this.” Even breaking through my horizon.

RH: Another trademark of yours is powerful use of light. What is its significance to you?

SB: Sometimes even when I do dark paintings, it’s the light that makes sense. I guess it’s always that quest: knowing there’s always so much more to be learned. That’s one of the reasons I’m always looking for light, trying to find it—seeing my glass always half full. I get pessimistic sometimes, but not too often. I’m just incurably positive. Even this (troubled economic) stage, I feel like something good is going to come of it. It’s not like the old Christian belief that you have to suffer to gain. It’s not so much that. We reach deeper within, searching deeper—finding something in the—reprioritizing. Those kind of lights … the light is celebratory … Even growing up in a culture where the dark and light are so respected. Especially at night—there are so many taboos at night. So you’re always looking for light at night. 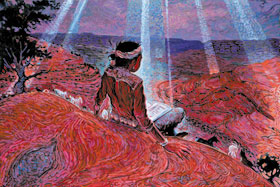 RH: When you made the leap to painting, what influenced you stylistically?

SB: People look at my work and say, “Oh, Van Gogh!” (laughs). I never studied Van Gogh … We tapped into that same flow of energy somewhere, somehow. We see the world through just a fractured, beautiful dance of colors.

RH: Yeah, Van Gogh certainly popularized that style, but the short brush stroke is more associated with indigenous, aboriginal painting, right? Was there a moment where that technique overtook your style?

SB: Drawing that day, praying that day, I think is what it was—sending prayers into the universe. And the way it had affected my work before that was pretty much just color fields. That day I started into that (prayer): “Today will be beautiful, walk in beautiful, I will be rejuvenated” (author’s note: the previous quote was translated from Navajo). That subconscious idea of hearing Dan Rather cry on the radio. This was the day the space shuttle exploded in 1986. That day I started painting my grandmother in the regular way, but I started putting lines on her face; lines everywhere, lines everywhere, lines everywhere. And I started liking what was happening. I liked the gesture and the whole movement and the way I was seeing it. That’s when it started. That’s when I started painting like this, pretty much with everything. 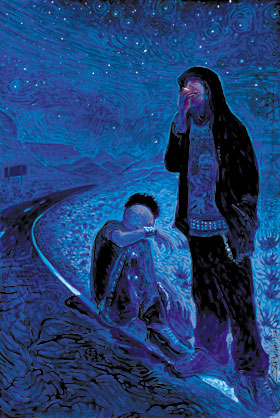 RH: So there was a moment when it just clicked?

SB: There was a moment, and I wasn’t searching. I was really quite happy with what I was doing up till that point. But for me, (my former style) wasn’t groundbreaking. I had important things to say, but it was executed in a regular way. So I sat there and got into this neo-impressionism, stuck in my own unconventional reality. That’s how I tend to be. And, I don’t know how the impressionist people way back did it, but it was the way for me. I felt a deeper communication, not only with the viewer, but also with the spirits. I grew up making and working on sand paintings as a little kid: 5, 6, 7, 8, 9, 10. Up to about teenage years I was helping the old medicine men.

RH: Was that your first exposure to an artistic impulse?

SB: Yeah, oh yeah, oh yeah. Letting the sand come through uniformly between your thumb and your hand, through your fingers. Draw these lines. Hold back a cough, a sneeze, anything—just being really disciplined. And we’d draw for hours, and sometimes the sand paintings would be like 10 feet in diameter, beautifully intricate … So doing that all the time, and seeing colors, and little lines, and circles, and anthropomorphic figures, and all the various colors of the sand. I also think that had a lot to do with how my work turned out. 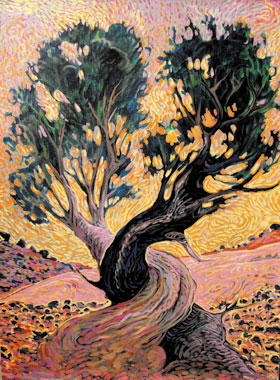 RH: When you go up and visit the family, are you still doing some sheepherding?

SB: The number is dwindling, but it’s still a symbol of respect when you have a good amount of sheep, a good flock. Besides, it’s the only thing we know growing up, and it’s like comfort food.

RH: How does that manifest itself in your art? Of all the imagery I see in your paintings, I don’t see a lot of sheep.

SB: The landscape, the melting snow is really as close as I get to getting back on the sheep trail. Painting sheep, right away, would be too easy. You’d expect it. (But) I have done a few sheep paintings. I don’t do sheep imagery too often. A lot of my work has them in there nonetheless—being on the trail, what happened after the sheepherding, resting between sheepherding, the thought process, the idea that comes to your head while you’re out there snuggling, embedded in some sagebrush, shielded against the bitter, blowing spring wind—again. 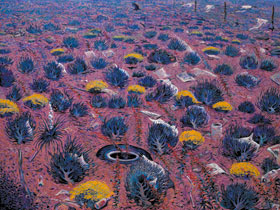 RH: Where is your work going right now? Where are you heading artistically?

SB: The next level is where my work is going. I have a lot of ideas. It’ll be good. It’s not a profession I chose to be in when times are good or when it sells. From the very beginning I said, “When it doesn’t sell, it doesn’t matter because I like it. It’s for me, first and foremost. And if I like it then it doesn’t matter if anybody else doesn’t like it. So I’ve always enjoyed that journey—validating my own vision, my ideas, and sometimes I answer my own prayers.