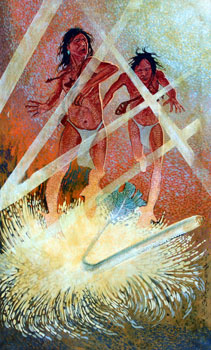 Shonto Begay stood in a far corner of the room, quietly watching as collectors inspected his work during the first few minutes of his exhibition opening at Medicine Man Gallery His expression was impassive, but his eyes sharp and bright.  He took it all in as though it was a new and uncertain experience—despite the fact that he is a veteran of dozens of museum and gallery shows.

When finally introduced to the first customer, the light in his eyes spread over his entire face.  Now clearly reveling in the occasion, Shonto began to unwind a lively story about one of his paintings.

Listening, watching, then telling the story.  This is how Shonto Begay has spent his entire life and career.  A nationally known author, poet, illustrator and fine artist, Begay is a born storyteller.  It’s in his blood and in his culture.  He grew up listening to his father—a widely respected Navajo Medicine Man—tell the ancient stories of his people.

Some of Begay’s books and paintings recount these traditional tales.  The painting, Ascent of the Hero Twins, depicts Monster Slayer and Born of Water, brothers who ascended to heaven on a feather for the purpose of defeating the Monster Gods.  In this origin story, the Dine (Navajo people) had emerged from the underground “third world” into the shimmering sunlight of the (current) “fourth world” only to be preyed upon by the Monster Gods.  In Heaven, the Hero Twins were given strong weapons, and they returned to earth to defeat the monsters in battles that lasted many months.

One of Begay’s most popular books, The Magic of Spiderwoman, tells the story of how the Dine learned to weave their famous blankets.  As is true with most Navajo legends, it also is a cautionary tale about the importance of respecting the teachings of the holy people, given to the Dine long ago. 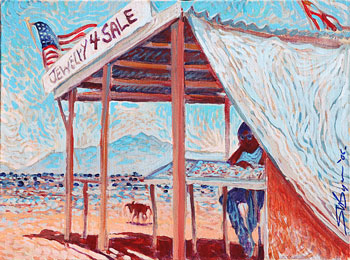 As important as the traditional Dine stories are to Begay, he also finds cultural, aesthetic and instructional value in stories of contemporary Navajo life.  Indeed, the great majority of his paintings portray everyday situations of modern life that have fallen under his scrutinizing gaze.  “I just notice all the little stories,” he says.  “Each person has their own story.”  He sees value and meaning in ordinary lives and in shared experiences.  “I paint the supporting characters, those you see in your peripheral vision, but out of postcard view.”  He adds: “I am celebrating the normalness of people—the truth of people.”

In Jewelry 4 Sale, Begay conveys the stifling boredom of a hot, dusty ramada on a lonely reservation road.  The young jewelry maker can only sit and wait, hoping the next carload of tourists will stop to make a purchase. There is nothing of the romantic Indian here, just someone trying to make a living with the resources at hand.  Grandmother’s Love Cup is equally unromanticized but, at the same time, a bit sentimental and homey, giving the painting more than a tinge of irony.  Grandmother wears a traditional velveteen blouse with a couple of old necklaces, and her husband wears a Navajo-style headband and a big silver earring. Nevertheless, their kitchen and their morning ritual are typically modern and could be found and repeated almost anywhere in America.  Begay’s point is made by the cup with its big, red heart, a mass-produced object of modern commercialism: a manufactured sentiment.  Despite the fact that it is utterly foreign to traditional Dine culture, it now also serves as a symbol of the deep family ties and affections of this old Reservation couple. 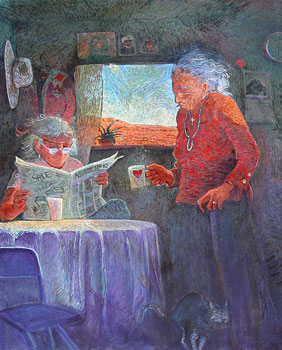 The theme of a traditional people caught in a world not entirely of their own making pervades Begay’s work.  However, he does not portray Navajos as victims to be mourned or pitied.  On the contrary, he wants Native Americans to be seen as ordinary individuals living, as best they can, with their own circumstances and problems and triumphs. “When people look at my paintings, I hope they get a more realistic view of us.  We’re still thought of as something other than what we really are.  We are not so different, so spiritual and earth loving, the ultimate hippies.  We’re just like everybody.  We’re placed in this world as caretakers, and the only difference is that we know who we are.  To paraphrase Fritz Scholder, I like to think I ‘paint Indian real, not red.’”

Given the realities of life in most Native American communities, the stories Begay tells are occasionally unpleasant—even disturbing.  “The role of the artist,” he says, “has always been to create a dialogue between the painting and the viewer, to document environmental and social conditions.  Though we may recoil at the scene before us, we have to look at the hard, painful stuff.  My journey is not so concerned with the stoic, stereotypical images of Indian life…but more with the daily struggles of the common people, and with what connects us in that commonality.”

In the large canvas titled Helpless, the sunlight streaming through a just-opened door reveals men and women sprawled around a cramped room, presumably sleeping off the effects of an all-night party.  The depiction is direct but nonjudgmental to the extent that the scene’s meaning is not apparent at first glance.  But as the viewer’s eye circles the canvas taking in body language and expression, a knot rises in the gut as the mind begins to comprehend.  This quiet power takes another form in Moonlit Drama upon the Shoulder.  The scene is a nighttime landscape with shimmering blue mesa and sage covered hills viewed from the side of the highway.  However, the focus of the painting, far off to one side is a solitary white cross: a simple, lonely reminder of a horrific event and a personal story ended too soon.

Begay never uses these implied narratives to sermonize or to shock.  He only wants the viewer to reflect on whatever meaning can be found in life’s varied conditions and events.  He finds in these stories a peculiar beauty that he wants to share.  “We say nizhonigoo bil iina, the beauty that you live with, the beauty that you live by, the beauty upon which you base your life.  For me, beauty is anything that stirs the soul, the emotion, whether it be grief, anger, joy, or melancholia.” 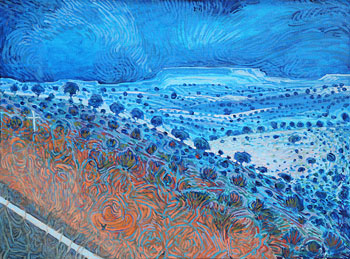 Whether joyful or melancholic in subject, Begay’s paintings are consistently beautiful as aesthetic objects.  His formats and compositions are frequently unconventional, but always carefully planned.  He is especially conscious of leading the viewer’s eye across the canvas in ways that emphasize the story and give the painting movement and energy.

It is Begay’s brush technique, however, that contributes most to the aesthetic dynamism of his paintings.  He uses short strokes of pure color laid up in swirling patterns.  Varying the length of the strokes lends both depth and energy to the work.  Although his technique is often compared to Van Gogh or Seurat, he claims little affinity for European styles.  “People have been doing this broken-stroke art for centuries.  Look at the aboriginal, spiritual work from Australia.  I’ve been calling it a visual chant for many years because our prayers or chants are put together by syllables, and each one is quite important.  (The broken-stroke technique) massages and caresses the life of the image to the surface.  The whole of the image, created through many fine strokes is just like the cells in a human being.  The cells, the strokes, make it more alive.  Your eyes are entertained.”

The vibrancy of Begay’s brushwork is amplified by a brilliant palette that contrasts cool blues and violets with warm oranges, reds and purples.  The juxtaposition of these tiny bursts of color give the paintings a shimmering effect, almost as if the paint was moving on the canvas. 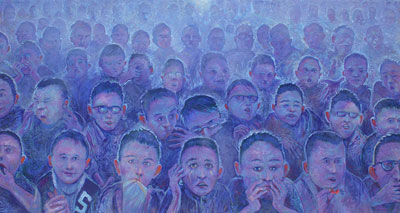 After more than 20 years spent refining his signature style, Begay has earned a national reputation and a large following of collectors.  Nevertheless, his career has always been more about self-awareness than critical recognition.  “I paint images and subject matters to bring about closures in my own life’s experiences that left me a bit bewildered.  Art is a way of life, just as breathing and eating and loving is necessary to nurture the soul.  For me to talk about my art is a conversation of the ethereal, like trying to hold down the wind with a butterfly net.  Each piece begins with a feeling, a yearning to bring into the light aspects of the psyche that need my attention.  I believe that in the role of a painter, I face down my fears and embrace my passion fully there before a blank canvas.  Coax into my world a little bit more order and peace.  We have a journey to make, dust must raised and pain endured.  My visions are shared visions.”

Stories that are both highly personal and universally recognized; this is the essence of Begay’s art.  Though we are all individuals with unique personal histories, Begay believes that we all “walk the same road.”  Paradoxically, we can connect to other people on that road only by sharing our own visions.  “My message is simple,” he says.  “Honor. Imagine. Create.  Build bridges through the arts and stories of your culture.  Validate and share these visions and voices.”

Shonto Begay is the author and illustrator of three books of stories and poems for children and adults, and has illustrated nine other books.  His paintings have been shown in numerous gallery and museum exhibitions around the country.  Born in 1954 on the Navajo Nation near Shonto, AZ, he now divides his time between residences in Flagstaff, AZ and his home ground on the Reservation.  An exhibition of Begay’s paintings opens at Medicine Man Gallery in Santa Fe on August 16, 2007.