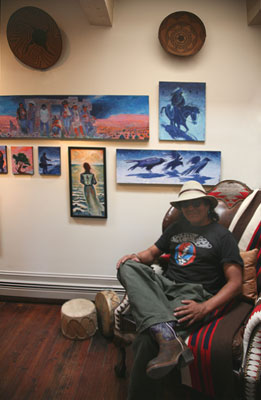 Born in a hogan and raised on Dineh’ land, known as the Navajo Nation, Shonto Begay began professionally writing, illustrating and painting in 1983. His work captures the striking beauties of a traditional Navajo upbringing and the harsh realities of modern reservation life. Represented in galleries and museums worldwide, he was one of 16 children. His mother is a traditional Navajo rug weaver from the Bitter Water Clan and his father was a medicine man born to the Salt Clan. Shonto grew up herding sheep in Kletha Valley, located in Shonto, Arizona. His acrylic paintings are done in a series of small brush strokes that repeat like the words of a traditional Navajo blessing prayer. Images harken heartfelt childhood memories and resonate the constant struggle for balance and harmony with humankind and the Earth.

Shonto’s traditional life of sustainability and prayer helped him endure the brutality of the U.S. government boarding school he was forced to attend as a child away from the loving family sheep camp he was asked to forget. Shonto speaks to audiences of all ages about inspiration and the importance of education and embracing cultural backgrounds. He is making his film debut as the character Cowboy in the upcoming Native-produced "Monster Slayer Project" – a movie about the Hero Twins, key characters in the Dineh’s origin story. A true storyteller, Shonto written and illustrated several books for Scholastic publishers.

Shonto attended Bureau of Indian Affairs boarding schools all over the Navajo Reservation and high school in Kayenta. He received an Associates of Fine Art degree at the Institute of American Indian Arts in Santa Fe, and a Bachelor of Fine Arts degree from California College of Arts and Crafts. He worked a decade in the 1980s as a National Park Service ranger at Grand Teton National Park in Wyoming and Navajo National Monument in Arizona.

From a very young age, I found excitement in recreating facets of my universe in varying images. I was inspired and surrounded by Hozho (beauty), including the sounds of songs and healing chants accompanied with stories from elders. I survived boarding school partly because of my spiritual strength and retreat into my drawings. I was always drawing. “Arts Save Lives” is my mantra. “Shonto” in Dineh’ translates to sunlight on water -- a reflection of light on the canyon wall from the flowing water. My journey as an artist is to document my life and the world as I see through the lens I was born with through my Navajo experience while negotiating the modern. I have worn many hats in my life: shepard, BIA Boarding School inmate, cowboy, National Park Service Ranger, Wildfire crew, professional boxing team support, film actor, author and artist.