Gallery visitors don’t normally expect to be reduced to quiet tears at the sight of a figurative sculpture. But that’s exactly what has happened from time to time when art lovers come upon The Long Walk Home, a 4-foot-tall figurative bronze by Shirley Thomson-Smith.

The dignified stoicism of the barefoot African-American woman - eyes downcast, body clad in a simple shift, shoulders held back with quiet strength and pride - is undeniably moving. Simple and profound, the work seems to sum up how both race and gender can endure and triumph over oppression. “I consider that one of the best pieces I’ve ever done,”says Thomson-Smith. “I put a lot of emotion into my pieces. I want my art to speak to someone.”

For almost 40 years, her graceful female figures, mostly of Native American or African-American women, have expressed themselves eloquently to lovers of sculpture seeking something deeper than mere aesthetic appeal. And yet those artworks convey more than just the lives of their subjects: They sum up the quiet strength and courage of the woman who created them. “I don’t speak well,” says Thomson-Smith, (who, in fact, has no trouble at all sharing her thoughts with clarity, warmth, and ample good humor). “But my pieces speak for me.” And the story they help the 82-year-old Oklahoma artist tell is one of personal, late-won triumph over humble beginnings, a sometimes oppressive upbringing and marriage, and a devastating divorce. “Not too many women start over at the age of almost 50 and succeed,” she says. “But art was my confidence, and I just dove into it and have never stopped since.” 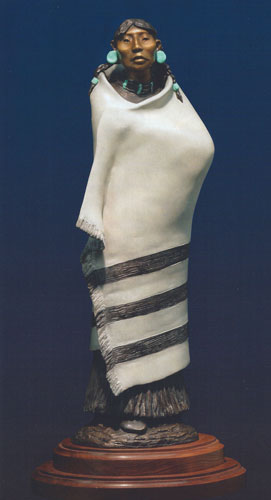 Art of some form or other provided Thomson-Smith with pleasure and fulfillment as far back as she can remember. Born in St. Louis and raised from the age of 5 in Oklahoma City, young Shirley “was always doing something in art,” she recalls. Her particular passion was cutting out paper dolls and then drawing beautiful clothing for them with crayons and paints. At school, she not only excelled in art but also found encouragement and support that was lacking at home. “I still honor Mrs. Cherry, probably my fifth- or sixth-grade teacher at Cleveland Grade School, for putting me in the right direction. Every art project she offered, I just gobbled it up.”

In 1945, she entered the art department at the University of Oklahoma, intending to become a fashion illustrator. But an elective course she took in sculpture changed her outlook. “I played in clay, and everybody complimented me on my work,” she says. “It was like a light went on for me.”

Unfortunately, just two years into her studies at OU, the light dimmed. Her mother couldn’t support the cost of col­lege educations for both Shirley and her brother. “I felt it was more important that my brother got a degree than I,” she says. So she dropped out. “I took typing classes and ended up being kind of a lousy secretary,” she adds with a laugh. Marriage soon followed to Joe Smith, “a land man in the oil business,” and the couple had three children together. Her artistic aspirations quickly evaporated. “I was kind of consumed with cooking and dishes and washing clothes and taking care of the kids,” she explains.

Still, almost without Thomson-Smith being aware of it, the foundation for her future as an artist continued to be laid. Her husband’s work led the family to relocate to Durango, CO, for three and a half years. “There was a hospital there for the Navajo reservation,” she remembers. “All the Indians would come into town, and I was just captivated with the Navajo women.” She felt an instant emotional kinship with them. “I saw that the men were overbearing to the women,” she says, her voice tinged with sadness. “And in some ways that was how my husband was to me, picking up where my mother had left off. These women had nothing, and they were silent. But they were very strong, very disciplined, very soulful. And I loved that in them.” 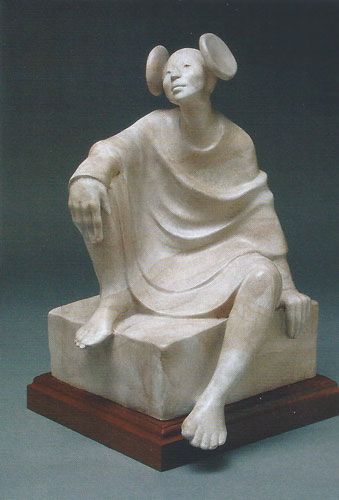 Those images of Native women continued to haunt her and sustain her after the family returned to Oklahoma City, where she continued raising her children. Then, in 1973, after 22 years of marriage, her husband suddenly told her “he wanted to go his own way.” She found herself left with “three beautiful kids to raise, a house, a rundown car, and $250 a month in child support. I thought. What did I do wrong? I was feeling kind of lowly and didn’t think that much of myself.” With her self-esteem at its nadir, Thomson-Smith turned to one aspect of herself that offered a chance for fulfillment and pleasure. “At that point, I just dove into my art, and I never stopped. It was the best crutch I ever had, and I thank God for that.”

She quit her administrative job in the office of a food broker and enrolled in studio sculpture classes at Oklahoma City University, intent on sculpting the sorts of strong female figures she had come to admire as a sort of Earth Mother model of quiet courage. To help support her family, she took a succession of odd jobs. At first unable to afford casting her works in bronze, she produced editions of mold-formed pressed-clay sculptures, the successful sales of which began to subsidize her foundry costs. “Back in those days,” she chuckles, “I sold one hell of a lot of clay.” In the early days, she was influenced in part by her admiration of sculptor Francisco Zuniga [1912-1998], who was known for merging classical studio techniques with an appreciation for the forms and traditions of indigenous pre-Columbian peoples. “I was so captivated by him that I called him my great white father,” she says. One thing she especially ap­preciated about his works was that his female figures were unabashedly earthy, portrayed with ample curves and large hands and feet. “I’ve always had big hands and feet myself and been ashamed of them," Thomson-Smith confides. “But his women were beautiful.”

Taking heart as well as inspiration from Zuniga, she soon realized, she says, that “I’d better get my own style.” Gradually, she explains, she became “more severe in the simplicity of my sculptures,” streamlining their contours and adding details selectively. Most importantly, she strove to incorporate movement in her works, sometimes overtly through striding legs or outstretched arms, some­ times more subtly through an attentively tilted head or the drape and flow of a shawl’s fabric. “To me," she says, “there’s nothing more boring than a sculpture that does nothing and says nothing to you.”

The expressiveness of Thomson-Smith’s works derives in some part, she says, from her creative process. Unlike many figurative sculptors, she doesn’t build up her clay over rigid metal armatures. “I do not work from a model at all,” she explains. “It all comes from my imagination. If I worked with a model or on an armature, it would be too stiff, there wouldn’t be any flow.” Instead, she uses water-based clay - “oil-based clay is too damn sluggish!” - to painstakingly build pieces that, for their solidity, feel all the more rooted in the earth. 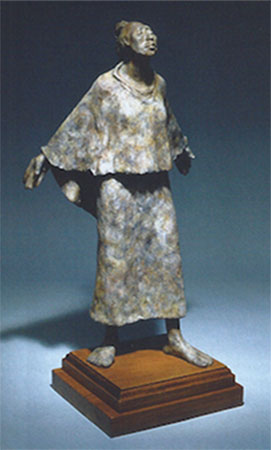 Thomson-Smith’s sculptures quickly won legions of admirers among galleries, collectors, institutions, and professional associations. In 1985, she became only the fourth woman to be admitted to membership in the National Academy of Western Arts when she was chosen to exhibit in its annual show at the National Cowboy & Western Heritage Museum in Oklahoma City. She continues to produce works for that show, now called the Prix de West Invitational. “I have to have four new pieces every year for it,” she says. “It’s so much fun seeing it.”

Anticipating her 83rd birthday in December, Thomson-Smith claims to be “slowing down.” For her, however, that merely means cutting back the typical work week in her garage studio from seven to just five days. “But if there’s a show coming and I’m not ready, I’ll still work Saturdays and Sundays,” she quickly adds. Still, she no longer gets as involved as she once did with the casting process of her bronzes. “The manager of the foundry near here that I used to use kicked me out,” she admits. “He said, ‘You’re just too hard to work with.’ I look for perfection, and I don’t want a crappy piece of sculpture that’s not done well.”

She now relies on a place in Loveland, CO, which takes detailed photos of the casting process on her pieces and emails them to her for approval. She also entrusts them to achieve the patinas she often prefers, which give her bronzes a look resembling white marble. “It really is very stunning,” she says.

And Thomson-Smith continues to strive for new ways to express emotions through the female figures that are so close to her soul and to her self. Lately, she says, some of them - such as Peace, a seated figure of a Native woman cupping a dove in her hands - have become even more streamlined and abstracted in their forms. “I’ve got to try some different stuff,” she says with a humble laugh. “You have to keep growing, you have to change a little bit. I just hope to heck that I keep it up.”

Norman Kolpas is a Los Angeles-based freelancer who writes for Mountain Living and Colo­rado Homes & Lifestyles as well as SouthwestArt.