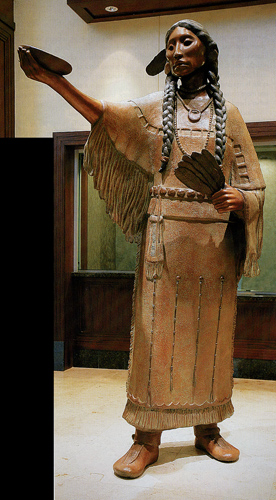 Visit any large courthouse building in the nation and you’re likely to find a life-size or larger statue of a figure generally known as Lady Justice, a classically robed woman holding a sword in one hand and balance scales in the other, her eyes blindfolded to signify impartiality. Enter the new State Attorney General’s office building in Oklahoma City, however, and you’ll find that traditional image represented in an entirely fresh way thanks to sculptor Shirley Thomson-Smith. Her 9-foot-tall bronze Spirit of Justice, dedicated last January 24, dominates the building’s foyer in the form of a Cheyenne woman holding in one hand a shell filled with burning cedar incense, in the other feathers to fan the embers – an accurate representation of a traditional smudging ceremony. “They do that to bless the tribe,” says the Oklahoma-based artist, “and ensure a good year, good crops, and good health.”

It’s her third or fourth monumental work, she says. “I can say this,” adds the 77-year-old artist with a laugh, “I wish this had come along when I was a little younger!” Age seems not to slow her down a whit, however, as she continues to win plaudits from critics and collectors alike in a 28-year-long career known primarily for her bronzes of proud ethnic women, mostly African-American or Native American. She works predominantly on tabletop-size editions, while admitting that she’d eagerly take on other large public pieces. “There’s such a sense of freedom in working big,” she says. Thomson-Smith is represented by Mark Sublette Medicine Man Gallery, Tucson, AZ