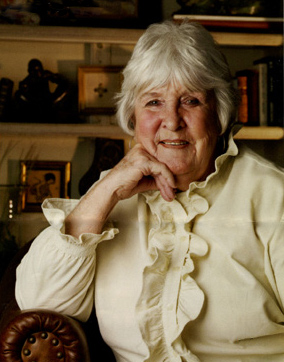 Shirley Thomson-Smith has made a 35-year career out of sculpting poignant figures of Navajo and African-American women.

Her subjects strike all manner of poses, from standing and sitting to reclining and stretching. Sometimes they are meditating. Other times they have a quizzical, wistful look on their faces. “I think they all look a bit pensive,” she says.

Many of them have large hands, very much like the hands of a Mike Larsen shaman painting, and they re often barefoot. These women are stoic, resilient, sometimes defiant…and always searching.

In that aspect, her sculptures could well be self-portraits. 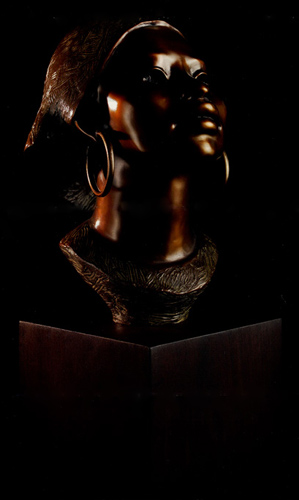 “I identify with these women,” she relates. “Growing up, I was a needy person and I was always searching.” She sought self-esteem, parental and peer approval and validation of her emerging talent.

Shirley grew up in Oklahoma City in an era when women’s talents and desires were often undervalued. She attended the University of Oklahoma for two years but quit because her parents thought a college education was more important for her older brother, now a well-known interior designer.

She pacified herself with designing clothes for her paper dolls and drawing constantly, focusing on the female figure. She married, had two sons and a daughter and, in her words, “made kids and cookies and did laundry.”

But as soon as her children were in school, she enrolled in art classes at the Oklahoma Art Center, then located at the Oklahoma State Fairgrounds, and the Cleveland Art Institute, which no longer exists. She took night classes at OU, studying with the late Gene Bavinger, and also took classes with area artists Leonard McMurray, Robert Burns Wilson, Tasso Pitsiri and Roger White. 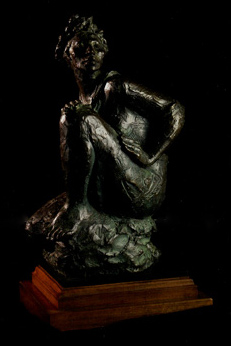 She credits OU art professor Joe Taylor with pushing her the hardest. “I learned just about everything I know from him,” she remembers. “He wouldn’t accept less than my best. He saw something in me I couldn’t see.” From him, she learned how to create flowing, graceful sculptures that elicit a positive emotion from the viewer’s first glance.

That was the result of an unexpected career evolution: with her first sculpture class, she abandoned drawing and has never drawn since, not even to sketch out a potential sculpture. A mover with her family in the early 1970s to Durango, Colorado was another pivotal step in the direction her art would take.

“I was enchanted with the women I saw going in and out of the Navajo Medical Center in Durango,” she remembers. “They were so quiet, so subservient, always walking behind the wagons or sitting behind the men.”

She found in these women a resolute strength, a dignity in the way they carried themselves, a pride in the way they held their heads high. Her sculptures capture that innate strength, courage and dignity. In her art, she continually celebrates the spirit of these ethnic women.

Even through a 1975 divorce, and a secretarial job she disliked, the memory of those women persisted. Quietly, they began to work their way into her sculptures, as did images of African-American and Mexican women.

She took menial day jobs so she could have her nights free to spend hours in her studio. As a turning point experience in her life, she committed one year to making it as an artist. She lived on a year’s alimony from her former husband and her life was fueled by her goal of becoming an accomplished sculptor. 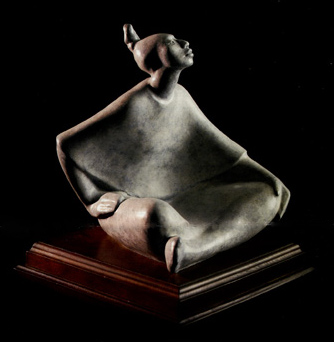 “I was scared to death,” she said. “It’s been a race all my life to achieve something with my art.” She has created a niche in the world of Southwestern art and she says,” I don’t want to lose my niche.”

Her work is now included in over a dozen galleries across the country, from Santa Fe and Taos in New Mexico to South Carolina and Minnesota. She remembers that early time as one of great productivity, as she worked tirelessly to create a large body of work that a gallery owner would consider professionally worthy of selling.

Michael Wigley was the first gallery owner to endorse her talent: he featured her work in his Quail Hollow Gallery in northwest Oklahoma City. He is now the owner of the Michael Wigley Gallery in Santa Fe, and Shirley is eternally grateful he opened the door to the gallery world for her.

As her sculpture progressed, she became a member of the Oklahoma Sculpture Society and in 1985 was accepted as a member of the National Academy of Western art – the forerunner of the current Prix de West event at the National Cowboy and Western Heritage Museum. She was also one of five Oklahoma artists invited to participate in the Museum’s annual Small Works, Great Wonders show last November. 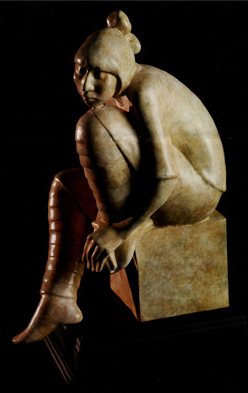 Numerous commission projects have come her way – one of the most rewarding was the larger than life-size sculpture titled “Spirit of Justice” she created for the new Oklahoma Attorney General’s office in Oklahoma City. Her sculpture is also featured in Edmond’s downtown public art collection, and she was honored with a retrospective of her work at Gilcrease Museum in Tulsa in 2001.

While the ethnic female sculptures continue to have a stronghold on Shirley’s work, she has been experimenting with several wildlife subjects, especially lovable penguins and irascible bears. She also has been reviewing her vast collection of small early works and plans to cast them in much larger pieces.

Never at a loss for sculptural subject matter, she confesses to being occasionally unable to come up with a good title for a sculpture. But that really isn’t true.

At the 2007 Prix de West show she presented an exquisite sculpture of a black woman who had been working the South’s cotton fields. Visibly exhausted and battered in spirit, the woman was holding her hand to her head. Shirley titled the sculpture “Oh, God.” Who could not have identified with the origin of that title and the tired, bewildered look on the face of the sculpture?

One very large bear cast in bronze was created to look as if he is sitting on the edge of a very steep mountain precipice, gazing down on the scenery and the wildlife below. What did she title this dynamic work”

“Hung Over,” she laughs.