Santa Fe Insider: The scoop on where to eat, stay, and go in the City Different. 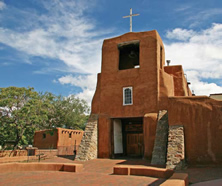 At 7,000 feet in the southern Rockies with crisp mountain air all summer long and an autumn that’s just as invigorating, the City Different is the perfect climate for cowboy and contemporary to flourish. You’ll meet locals like Nobel Prize-winning physicist Murray Gell-Mann and visitors like the 55-year-old John Wayne Haynes, who recently rode his Appaloosa here 2,000 miles from Michigan. Come summer, the beauty quotient intensifies as purple and pink cosmos sprout, woodpeckers and hummingbirds alight on lush cottonwoods, and apricot trees ripen alongside thick-walled adobe homes. Santa Fe is a place where, as Richard Bradford wrote in Red Sky at Morning, one can hide from the world. 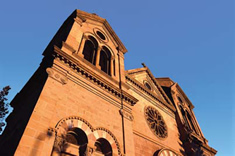 Indian Market, Indian Summer
Hide from the world — or not. In Santa Fe, population 70,000, everyone turns out for Indian Market. And visitors pour in by the thousands for the annual event. It falls in August — this year, August 22–23 — still high-season summer, and even in a wavering economy, things bustle. Lucky you if you’re flying out of Dallas: In June, American Airlines added a new nonstop flight into Santa Fe on American Eagle. 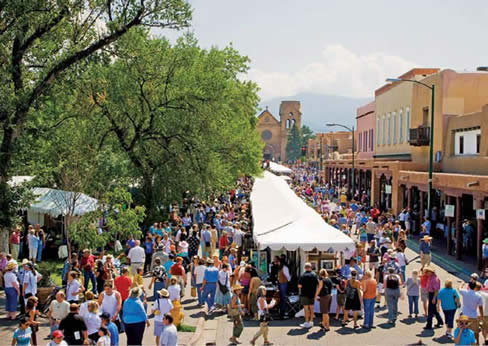 Visitors pour in by the thousands for Indian Market

Two new restaurants have recently launched to success: ¡A La Mesa!, propelled by its charismatic chef, and Vinaigrette, where insiders lunch. Downtown’s most lavish hotel, the Rosewood Inn of the Anasazi, is sold-out with a waiting list for Indian Market. The Santa Fe Opera is performing Verdi’s La Traviata, and the New Mexico History Museum just opened to fanfare. It will be more than a year of fanfare here, in fact: Santa Fe is celebrating its 400th anniversary next year, and festivities kick off on Labor Day weekend and continue through 2010. 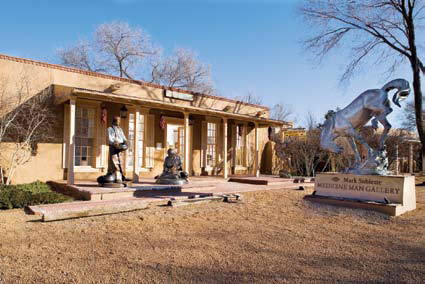 In that famous high-desert light that’s attracted generations of artists, things are looking sunny in Santa Fe. Real estate is rebounding, and Hollywood’s in and out filming (Jeff Bridges was here making a country-music movie not long ago). Santa Fean and Medicine Man Gallery owner Mark Sublette is all about the silver lining during trying times: “If tourism is down a little, it’s easier to navigate the galleries on Canyon Road — you may actually be able to find a parking spot and spend time with the art and the art-gallery staff. ” For him, a Santa Fe summer is a many-splendored thing: “Each month is special, with different plants and flowers blooming. The apple blossoms and lilacs come first, then the chamisa blooms toward Indian Market.” 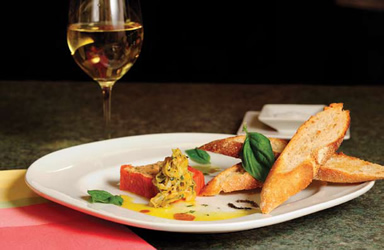 Salmon rillette with melted leek vinaigrette at ¡A La Mesa!

Eating Out
Also blooming in Santa Fe: a new crop of eateries. The current darling of Santa Fe’s dining scene is ¡A La Mesa!, a bistro so modern it churns its own butter. Founding chef Jacob Hilbert — looking like Keanu Reeves’ younger brother — arrived from Las Cruces, New Mexico, and wasted no time making his place the place. Most nights every table is taken here; on any given evening you might run into actress Marsha Mason, designer Donald Pliner, or artist Dan Namingha. But as quickly as he arrived on the scene, Hilbert mysteriously disappeared when summer began and his longtime sous-chef Jameson Chavez took over as executive chef, a post that sees Chavez happily furthering the inventive cuisine, drawing on French, Spanish, and Moroccan flavor pairings. 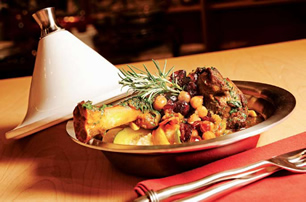 Seared Scallops with chow-chow relish and Tajine of lamb steak shank at ¡A La Mesa!

For a classic version of French-Southwest cuisine, there’s the elegant Ristra. We’re not sure what Jeff Bridges ate when he came here during the filming of Crazy Heart, in which he plays an aging country musician, but in the back room by the bay window, diners were opting for crispy king salmon and grilled spiced duck breast. “This summer in Santa Fe,” says owner Eric Lamalle, “the usual crowd will still come.” And that’s sure to include the rich, famous, and turquoise-laden. 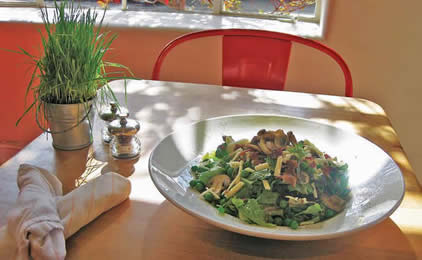 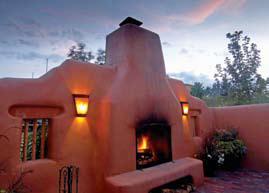 The kiva at Rio Chama Steakhouse

For lunch, the in place is Vinaigrette, an industrial-chic space specializing in salads. Try the Cherry Tart salad with dried cherries and feta cheese, or the rustic Eat Your Peas salad with crunchy bacon shards. Yum. 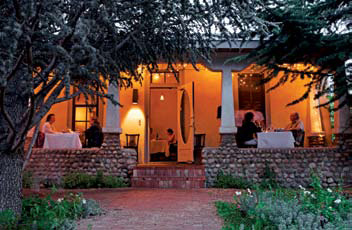 Staying Inn
Splurge is the word at the posh Inn of the Anasazi, a Rosewood hotel with 58 rooms priced from $249 to $1,000 a night. Step through massive hand-carved doors into this intimate retreat and find yourself in a world of Southwestern elegance with intimations of prehistoric pueblo living. “The most requested rooms,” says managing director Andrea Gates, “are the private balcony rooms.” During Indian Market, chances are there are no rooms at the inn — though you can always try — but make a note to ask for the Picture Perfect Program if you’d like to receive a digital camera for your stay and have your images subsequently downloaded onto a DVD. Or try the new Shopping Package, which offers a gift with purchase at Nambé (known for its silver and crystal), 20 percent off at Onorato Home & Ambiance (stocked with Egyptian-cotton bedding, creamy Doux soaps, and soy candles), and a style consult at Lily of the West formalwear. For dinner, consider the Anasazi’s Friday-night tasting table with chef Oliver Ridgeway. Or, here’s an idea: Order room service and stay put on your stunning balcony, enjoying the piñon-scented air while watching shadows play on mountains, desert, and adobe. 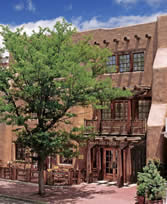 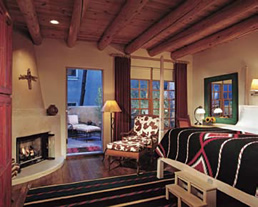 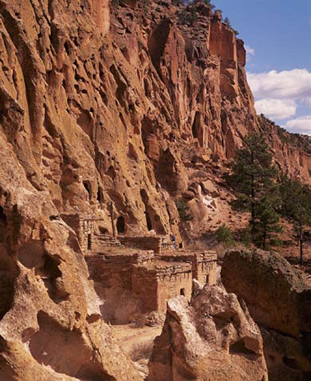 Museum-Going
Back in town, four centuries of artifacts, archival photos, and oral histories are collected at the new 96,000-squarefoot New Mexico History Museum. Opened in May just off the downtown plaza, the museum features multimedia and interactive elements that bring to life Kit Carson, Billy the Kid, and Georgia O’Keeffe, with a whole wall dedicated to heroes and outlaws. 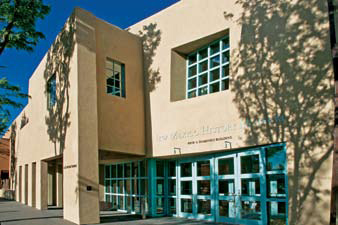 Nineteen Indian pueblos and three tribes participated in the museum’s inclusive rendering of history. One of the things you’ll learn is that Santa Fe has always been stylish, which is why world-famous jewelry company Tiffany’s was here as early as the late-1800s to mine its Tiffany Blue turquoise. 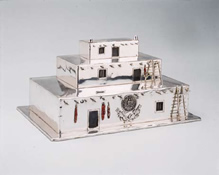 New Mexico History Museum in Santa Fe, Items in the permanent collection include a sterling silver humidor by Tiffany & Co. (1918), a wooden chuza gaming wheel (circa 1821), and a locket photo of Kit Carson (1864)

Turquoise jewelry is just the beginning of art to mine. Santa Fe’s reputation as an art hub with more than 240 art galleries is being enhanced with the new Railyard Art District, where the ART Santa Fe contemporary art fair takes place July 23–26, and PhotoArts Santa Fe is being held July 24–August 2. At the Medicine Man Gallery, Mark Sublette is mounting an exhibition of Navajo Saddle Blankets, circa 1870–1939 — just one of a half-dozen special shows this summer.

The biggest summer event is, of course, Indian Market, the largest gathering of Native artists in North America, with more than 1,000 artists participating from about 100 tribes. Since 1922, the annual Santa Fe Indian Market has drawn buyers, collectors, and gallery owners to mingle with leading Native artists selling their pottery, jewelry, paintings, sculpture, and beadwork. Wear good walking shoes and bring your fry-bread appetite.

The party doesn’t end when Indian Market does. Santa Fe is always a fiesta, but it’s really going to put the party on come Labor Day weekend, when the Santa Fe 400th anniversary celebration kicks off with Viva! Santa Fe, a two-day outdoor festival celebrating the city’s sights, sounds, and flavors with concerts, cooking demonstrations, a procession of lights, and a fireworks finale. The “400th” commemorates 400 years of culture from the establishment of Santa Fe as a “villa” in 1610 by the Spanish. The party goes throughout 2010 — see you there.