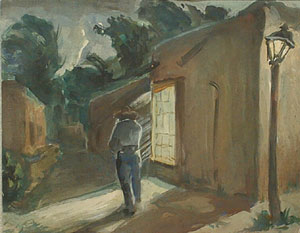 A native of Topeka, Kansas, Gage graduated from Washburn University before moving to New York and attending the Art Students League, the Robert Henri School of Art, and the Beaux Arts Institute of Design.  He apprenticed with Gutzon Borglum from 1914 to 1916, and again from 1921 to 1923 when Borglum was developing the Confederate Memorial Carving at Stone Mountain, Georgia.  In the interim, Gage taught at Washburn and the Kansas City Art Institute, completed his first public commission for the state of Kansas, and served in the medical corps during World War I.

In 1923 Gage and his wife, Marian, moved to California, eventually settling in Santa Monica Canyon.  He taught at the University of Southern California from 1925 until his retirement in 1958, and also taught at the Chouinard Art School from 1928 to 1930.

Gage exhibited extensively in southern California and completed numerous commissions including Linclon, Man of Sorrows and Pioneer Mother, both on the grounds of the Kansas state house.  Other projects include fountains in La Jolla and Hollywood, California, and bas relief architectural panels.  He executed non-commissioned sculptures in bronze, terra cotta and wood, and occasionally made easel paintings in oil.