Catching Up with Ray Roberts 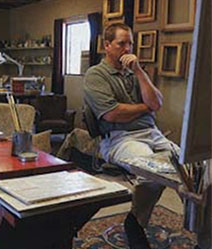 Although he is best known for his award-winning landscape and seascape paintings, California artist Ray Roberts has always kept his artistic hand in figurative work.  He has both taught classes on figure painting and created figurative pieces in his studio, but he never showed the paintings to the general public.

That all began to change in 2005 when he submitted Sierra Siesta, an evocative paining of a woman reclining on a rock in the Sierra Nevadas, to the California Art Cub’s annual Gold Medal Show.  The painting won the top prize, the Artists’ Choice award, at the show.  What better kudos than ones given by your peers? 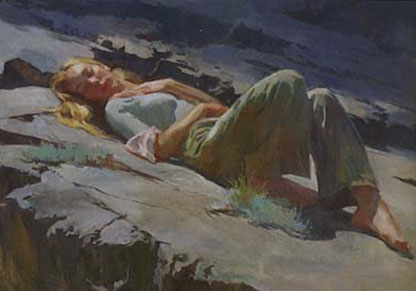 Since then Roberts has continued creating landscape works, but these days his oeuvre is sprinkled generously with figures.  His paintings sometimes feature family members such as his daughter, Mary in At the River, a portrayal of the girl at Candy Rock near his home in Angels Camp.  As a landscape painter, Roberts has often captured the Pacific Ocean beaches with their picturesque coastline views.  So it’s no surprise that he enjoys placing his figures in watery scenes. “Water is a design element I can play with and change its color,” he says.  “It’s also intriguing the way it can become abstract shapes.”

A new series of works focuses on Native American cultures and shows figures wrapped in richly designed Navajo blankets.. “The blankets are historic, and the geometry of their designs appeal to me,” says the former illustrator.  This current series is inspired by Maynard Dixon’s works as well as trips Roberts has made to Navajo reservations in Arizona to sketch and photograph.  In several canyons near Sedona and Flagstaff, Roberts has found amazingly artistic petroglyphs on the walls.  “They are honest, genuine, and beautiful,” he explains.  He often incorporates what he calls highly interpretive renderings of those ancient images into the backgrounds of his current Native series. 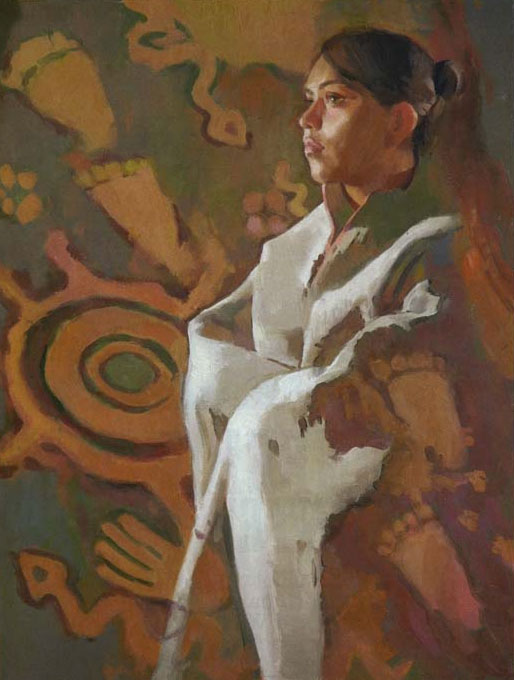 To see Roberts latest figurative works consider attending the Laguna beach Plein Air Painting Invitational in October in Laguna Beach, CA, where the artist says he plans to create a piece for the show.  “Now that I’ve said it,” he quips, “I guess that means I have to do it.”