Rhythms of the World:  Ray Roberts celebrates his lifelong connection to nature 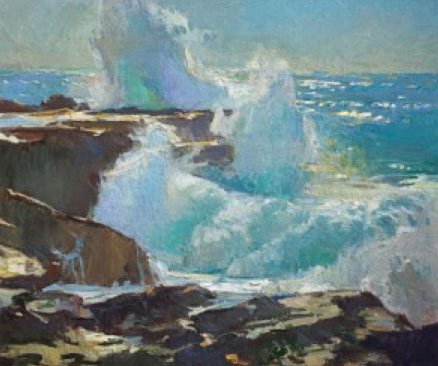 Waves crash against a rocky shoreline, splashing and foaming with a vitality so convincing you can almost hear the water, practically feel its pounding force. Coastal mountains punctuated with lush trees and cloaked in summer-parched grass undulate sensuously, as if the earth itself is dancing. Stark morning light and shadow delineate the dramatic striations of canyon walls, the rugged edges and subtle geologic layers becoming a three-dimensional manifestation of nature’s rhythms.

Oil paintings like these by Ray Roberts don’t just faithfully depict scenes of California and the Southwest. They also quietly yet powerfully capture a sense of place while expressing the very pulse of creation. Each in its own way manages to share with the viewer a deep connection with the natural world that the artist has felt almost since birth. 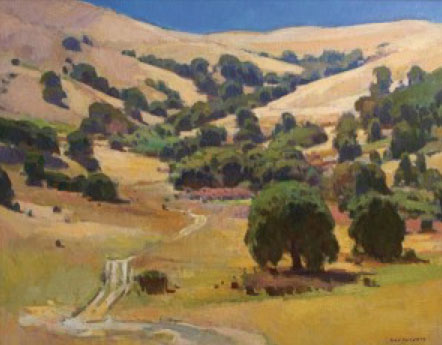 During his youth in Orange County, CA, from the mid-1950s through the early ’60s, Roberts first felt those spiritual links. “That was raw Southern California,” he recalls of the state as he first came to know it. “I can remember tooling around some of the undeveloped areas before they were putting in housing tracts and freeways. There were huge sycamore trees and rolling hills, desert scrub, and dry washes. And lots of orange groves.” Family camping trips in the lower Sierra Nevada, stays with his dad’s family in the Central Valley foothill town of Porterville, and visits to his mom’s folks in the coastal city of Santa Monica further expanded and strengthened those ties, providing him with a background he has long thought of as “deep California.”

But suddenly, in 1968, family tragedy wrenched him away from the landscape he’d always known. Mere months after a cancer diagnosis, his father died. Ray, just 14 years old and entering  ninth grade, floundered. “I missed a few weeks of school, and I never caught up,” he says simply.

His aunt and uncle suggested that Ray’s mother send her son to the Orme School, a private boarding school founded in 1929 on 300 unspoiled acres in central Arizona. Not only did Orme offer a serious academic program with very small class sizes for individualized instruction, and a strong sports program among many other outdoor activities, but it also prided itself on its fine-arts and cultural instruction.

At Orme, Roberts’ vision of a career that might include an aesthetic element first began taking shape. He’d always loved drawing. “I kind of joke around that Crayola was my babysitter,” he says. Within the well-structured school environment, his artistic leanings took a more practical turn. “Being a fine artist seemed an unrealistic goal,” he says. “I thought I was going to go in a respectable vocational direction like architecture or engineering.”

With that in mind, he returned to Orange County in 1973 and entered Santa Ana City College to work toward an associate of arts degree en route to a four-year college. And that’s when his goal began to change.

“You had to take what was called an interests survey class, where you took a battery of vocational tests and researched different careers,” he explains. That’s how he first learned of the respected Art Center College of Design in Pasadena, where he could train to become an advertising art director. “That seemed creative to me, involving a little bit of drawing to design advertisements.”

He entered Art Center as an advertising illustration major, graduating with a bachelor of fine arts degree in 1978. “It gave me a lot of practical job skills. I learned everything—hand-lettering, paste-up, film, photography, graphic design, illustration.”

Art Center also helped him realize what he didn’t want to do. “Our last semester, professionals came in from Mattel Toys to give a presentation to our advertising class. They told us how working for Mattel, we could make a lot of money, and they showed us a bunch  of Barbie ads,” Roberts relates with a chagrined chuckle. “I came away afraid that Barbie money might set me into advertising forever.”

Instead, he became a freelance illustrator. “I started at the bottom,” he says, “doing a lot of black-and-white newspaper ads for real estate companies.” 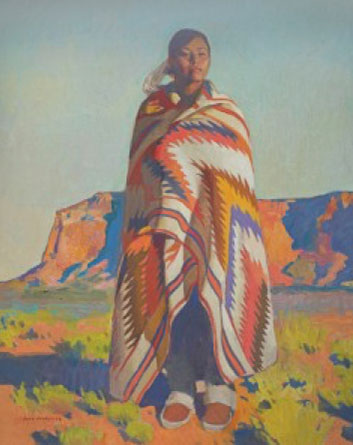 But his lifelong love of nature soon came into play. “I still had a little bit of country left in me, so I began adding a lot of landscape stuff with water and trees to my portfolio,” he says. Eventually, he won more premium assignments, illustrating brochures for the likes of Princess Cruises with idyllic scenes of water and palm trees.

As his illustration career grew in the direction of the landscapes and seascapes that had always felt so close to his heart, another important factor entered his life in 1984, when he reconnected with fellow Art Center student Peggi Kroll. “We’d been in a couple of classes together but had lost touch,” he says. “I’d heard she had moved to Arizona, and whenever I’d visit there, I’d try to look her up.” His efforts had been to no avail. Finally, at a mutual college friend’s going-away party in Los Angeles, he was surprised to bump into Peggi and to learn she’d come back to California, was working as an illustrator, and didn’t live too far way. “It was a couple or three months before our calendars worked out,” Roberts recalls. They finally met up again in early June to play golf. Three weeks later, on June 25, they married, and this year they celebrated their 30th anniversary. (Peggi Kroll- Roberts was featured in the July 2014  issue of Southwest Art.)

The instant affinity they felt for one other quickly moved both further in the direction of fine art. The same year they met and married, they took a painting workshop together from noted contemporary impressionist Dan McCaw. “We both loved drawing and painting from life, and we needed that outlet for it,” says Roberts.

In 1985, about to start a family and wanting to raise their children in a smaller-town atmosphere, they moved to Scottsdale, AZ, from which they were easily able to continue their respective freelance illustrating careers. Soon, they began taking classes at the Scottsdale Artists’ School.

By the early 1990s, Roberts was exhibiting his landscapes at weekend outdoor art shows. Galleries began taking notice. So, too, did more prestigious shows. In 1995, for example, his work was juried for the first time into the Phippen Museum’s annual Western Art Show and Sale, and he won first-place and best-in-show accolades. “I certainly was knocked out,” he says, modestly adding, “I didn’t know what they saw in my work, but I wasn’t going to walk away from it.” 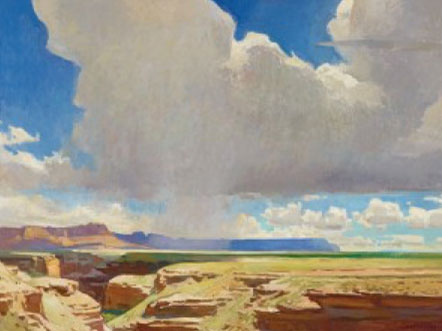 Solo shows soon followed, as well as two-person exhibitions shared with  Peggi. “The transition to full-time fine  art was gradual,” Roberts recounts, noting that the rise of computer graphics in the 1990s hurried the process along. “Eventually the phone stopped ringing” with illustration commissions, “and we were very happy to be painting for ourselves.” About 17 years ago, they moved to  a 20-acre farm outside the historic California Gold Rush town of Angels Camp, where they share a studio space in an old barn they converted on their property.

Now a full-time fine artist of almost two decades’ standing, Roberts remains grateful and even humble about his success. “Sometimes I feel pretty cocky,” he laughs, quickly adding, “and other times I go, ‘What do other people see in my work?’”

That question is quite readily answered. What they see is the work of an artist fully in command of his talent and skills, a man who knows what he likes to paint and how he likes to paint it while charmingly resisting labeling his style. “You could call it representational,” he finally offers. “But all isms are kind of confusing. It’s not really  set in stone what each one of them means. I just let other people look at my work and label it how they like.”

He will, however, happily admit to an overriding fascination he feels for “patterns and design. I try to tap into Mother Nature and geology, try to see the geometry and the chaos of it all,” he says. And then he assuredly shares that vision with others.

Take, for instance, THUNDERING SURF, the kind of seascape he passionately tackles as a creative challenge. “It’s just about impossible to paint crashing waves,” he explains, “because the water is constantly moving, and not only is it hard to sketch and paint, but it’s also mesmerizing, so you tend to lose your focus. You really need to be on task, to get a notion of what you want to paint but also draw from within.” For this particular scene, set in the Southern California town of La Jolla, he made several quick oil sketches as well as taking digital photographs before combining those references with his own memories to create the painting in his studio—a process he follows for about half his work, while other, smaller, less mesmerizing subjects might be completed in a single plein-air session. 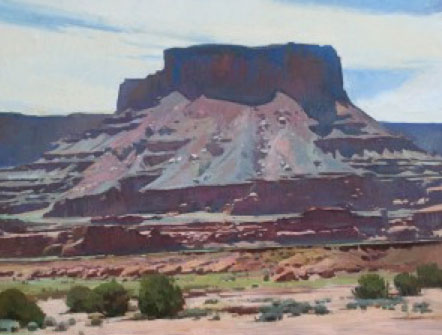 Roberts is justly satisfied with the results of such a process, and with where he and Peggi are now in their lives. But that doesn’t mean that, at 60 years old, he doesn’t still want to evolve as an artist. He’d love to do more figurative works, for example, incorporating his subjects within nature. “I was trained as an artist through painting the figure,” he explains. “The human body is just a very basic natural attraction.”

He’d also like to live and work closer to the coast, perhaps in the California artists’ mecca of Monterey. “The power of the ocean is a very primal thing. I’m drawn to it, and it makes me feel alive,” he says. And, he might well add, he then manages to share that vital energy with others through his paintings.