Ray Roberts paintings of western landscapes and Native Americans are featured in an upcoming show at Mark Sublette Medicine Man Gallery in Tucson.

Ray Roberts was born in California, but spent his formative years in the desert of Arizona,  As an artist, he's always been drawn to both places.

"I went to high school near Prescott, Arizona, and whole school would pack up in cattle trucks and we'd do these trips to different parts of the Southwest, different parts of the reservation," says Roberts.  "We'd go to the Four Corners area and I was on some digs and it just sort of stuck with me.  Arizona was a major part of my life in my early years, but I still have deep roots in California, because I was born there.  I just can't get completely away from the light, the water, the coast, and everything that speaks to me about California, and yet, still, the people, the landscape, the raw, exposed earth, the severity of it in Arizona, still speaks to me also."

Fortunately, Roberts has found a way to combine his passion for both landscape and figures. 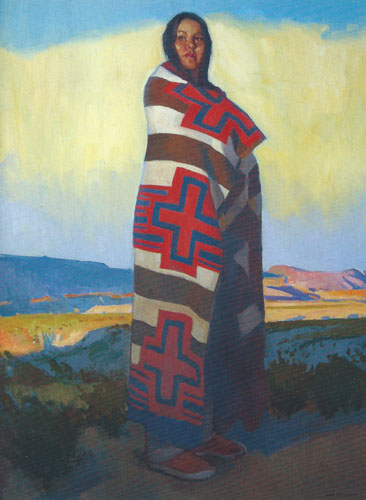 "I've been going back to Arizona and teaching workshops at the Scottsdale Artists School, and I rekindled a friendship with a former student who is an art teacher on the Navajo reservation in Pinion," says Roberts.  "Ten years ago I started going up to Canyon de Chelly to paint.  It just sort of hit me how much I love to paint the figure; that, and my interest in the Navajo culture, just sort of came together and coalesced in my mind in an epiphany.  I decided that this would be the best of everything for me. My enjoyment of the figure, the Navajo culture, and the desert landscape with is color and forms."

Roberts explains further, "The Navajo are particularly artistic with their culture, with their weaving and their pottery, and their way of life.  They worship the Earth and it really spoke to me.  It speaks to me even more now with the way the whole world has evolved." 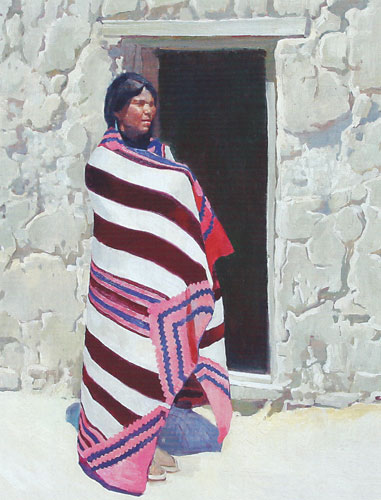 His friendship with the Navajo teacher and artist led Roberts to the perfect model for his new body of work.

"This young girl is one of my friend's students," explains Roberts. "She made arrangements for her to pose fo rme in the traditional Native dress. I did  a lot of sketches of her and in several of the paintings I've incorporated some of Mark Sublette's antique period Navajo blankets.  Pinion, Arizona, was an incredible setting.  I did several quick sketches and incorporated that with several of my other sketches from previous trips there and in Utah to create the paintings that represent this body of work." 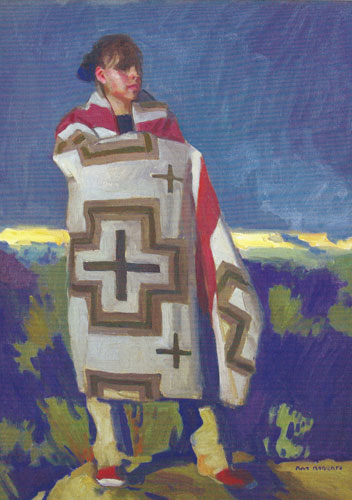 Roberts says although the subjects may appear to be simple in this new work, they are not and he took risks with the compexity of the paintings.

Roberts talks about one painting in the current series about which he's particularly proud called Painted Skies.  He says the painted skies were an idea he had while attempting to include petroglyphs from Newspaper Rock in Utah. 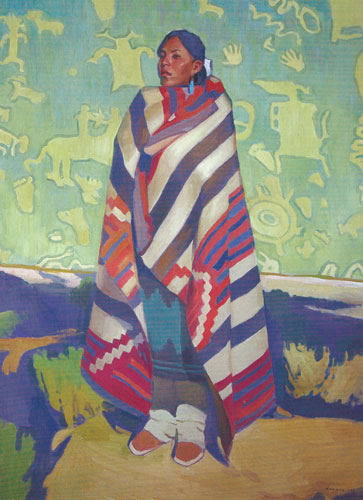 "I'd experimented with different approaches to incorporating two-dimensional images into a three-dimensional setting," says Roberts.  "It took a while for that to evolve into the painting that it did, but I love the result.  The challenge was to find a way to have it feel more natural and believable in a natural setting.  I see myself doing more of that kind of thing." 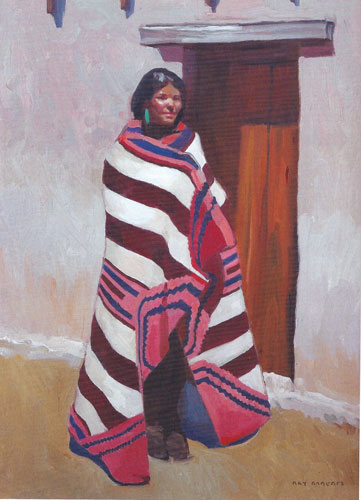 Roberts explains more about the symbols he found.  "Newspaper Rock is not specific to the Navajo.  Those pictographs, also knows as petroglyphs, have taken centuries of passersby making marks on the rock.  They represent several different peoples and cultures that traveled through that area.  I'd like to do more Navajo-specific symbols in future paintings, but I've yet to do the research."

As he talks about it, Roberts reasons through his choices and says he does not want to be predictable.

"I guess I just have to stick my neck out," says Roberts.  "You can take a lot of risks with the quick sketches, without commiting a lot of time and materials in creating large works.  For instance, I'll try to paint things that many would deem unpaintable, whether it's the subject matter or the complexity of whatever I'm painting.  If I see something that strikes a chord with me, I might try a medium size canvas.  And as that chord becomes clearer and if I sense a harmony in it, I'll attempt and even larger canvas to explore.  It's not 'if.' it's 'when' I get in trouble, I just have to stick with it until that voice, that sound, comes back to me of what initially spoke to me."

Finding his own voice and style took Roberts some time.  He explains, "I had gotten my degree in fine art and been a commercial artist for more than a decade.  In pursuing fine art, I started taking workshops, and I made a lot of friends in the art world.  I've learned so much aand I owe so many different friends and artists in what I did at that age.  I think it was really being able to shut out all those other voices and begin to listen to my own voice and just developing that clarity in my own voice.  I feel like that's happening every day."

When he thinks about the future of his art, Roberts waxes somewhat philosophical.  "People have described my artwork as something that will be collected years beyond my passing," says Roberts.  "I really want to get the most I can out of life.  I want to be able to be around long enough to share some quality time with my grandchildren.  I want to go on lots of adventures.  I want to learn a lot of things.  I want to be curious.  I hope all those things show up in my art."