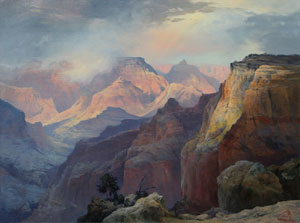 Ralph Love is best known for his southern California landscape paintings and views of the Grand Canyon and Monument Valley.

Love was born in Los Angeles and lived in southern California his entire life.  At a young age he decided to become a painter, but was self-taught except for two years of informal instruction with Sam Hyde Harris.  He developed his skill through reading art books and through constant practice, eventually developing a polished, realistic style reminiscent of Thomas Moran. 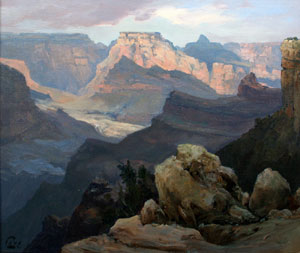 Love worked in oil and was highly prolific, though he painted landscapes almost exclusively.  He was hired to adapt his painting to the creation of dioramas for the Living Desert Museum in Palm Desert and the Mission Inn in Riverside, California.  Senator Barry Goldwater was a fan of Love's work and owned some of his Grand Canyon views.

In the mid-1950s, Love opened a studio in downtown Temecula called the Art Shack, where he sold his paintings and taught art classes.  Although he earned his living with his art, Love also was an ordained minister.