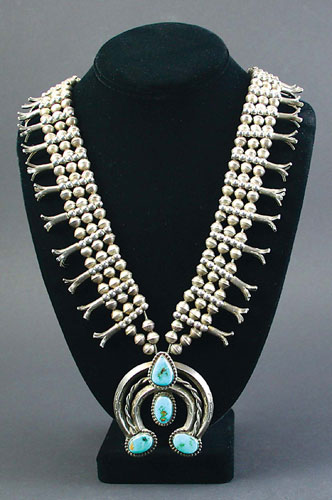 The Navajo Nation, the largest Native American tribe in the United States, were the first Native Americans of the southwest to learn silversmithing. Their knowledge initially came from the Spanish and later expanded through trade with Mexican plateros and the Plains Indians.

It was not until the 1850s that the Navajo began to work metals. Until that time they acquired metal ornaments and objects through trade with the Spanish and the Mexicans. The first known Navajo silversmith was Atsidi Sani (Old Smith) or Herrero (iron worker), as he was known by the Mexicans. Taught blacksmithing by a Mexican near Mount Taylor, he passed on the skills to his sons and others while they and their tribe were incarcerated at Fort Sumner, New Mexico between 1864 and 1868.

There is evidence that during this period the Navajo were producing some silver work, but it was not until the 1870s, after their release, that silversmithing took off in earnest. Released from captivity, they trekked home to their mesas and canyons deprived of much land and without compensation, carrying their homemade metalworking tools and newfound skills. 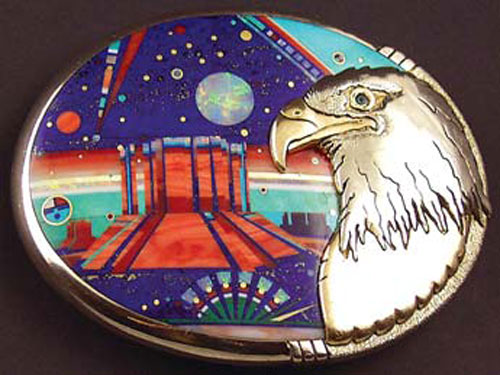 Early Navajo silversmiths created buttons, clasps, and horse bridles for their personal use, in iron, copper or brass. Their work emerging from primitive forges powered with goatskin bellows and shaped with rough tools. Before creating their own decorative pieces, they acquired, by looting or trading, silver trinkets crafted by Eastern tribes. Many of these pieces imitated popular colonial styles created in the English tradition. This explains why traditional, simple Navajo silver, despite obvious Spanish (and hence Moorish) and Mexican influence, may also remind connoisseurs of antique English silver.

To compensate for a lack of raw material, they melted down and then hammered old metal wagon and harness fittings, as well as United States silver dollars, fiftycent pieces and quarters into broad, flat bands. These were fashioned into hatbands and ketohs - bow guards - that protected archers' wrists against the snap of their bowstrings. Some of these bands, grooved with rude files, bore decorative ridges. 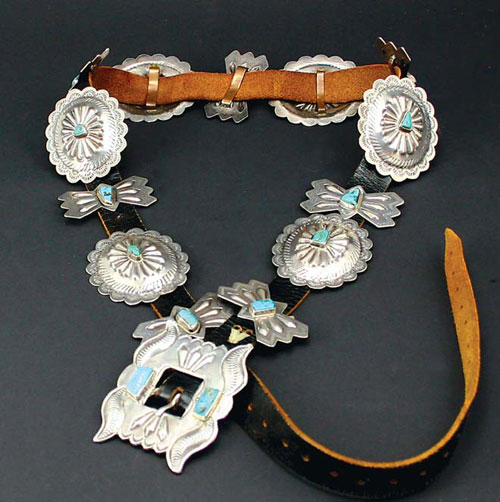 Navajos could now create a variety of finer silver articles, including canteens, earrings, tobacco flasks, belts, bracelets, bridle ornaments, and round, oval, or fluted beads. Although most they fabricated from sheet and wire, some were created by laborious sand or lost wax casting.

Early Navajo jewellery identified as First Phase (1868-1900) is characterised by the simplicity of design with the attention on the silver. Classic designs appropriated from many sources feature symmetrical stamped designs of sunbursts radiating from central diamonds or circles punched into centres or along the edges or squash blossom motifs. These are evocative of the Moorish pomegranate blossom design prized by the Spaniards. These designs probably decorated the trousers and jackets worn by Spanish men in the 19th century.

Though a squash blossom bead, round, hollow, and adorned with circles of open 'petals' may resemble a flower, it is neither squash nor flower. Navajos simply call it 'the bead that spreads.' To Charley Billy, raised by his Navajo grandparents on the 'Big Rez' (Reservation) near Chinle, Arizona, these beads symbolise strength, regeneration and the fertility of the earth.1

Squash blossom beads appear extensively in Navajo necklaces, along with another Moorish talisman that traditionally wards off the evil eye. Originally, a naja was an old world amulet fastened onto horse trappings to ward off the evil eye. This crescent half-moon shaped bar, that once graced Conquistador bridles, is typically the central pendant on squash blossom necklaces. Ever-popular najas appear in many forms, single or double, unadorned, hand stamped, or enhanced with turquoise.

When silver and turquoise, which Navajos purchase from mines in Nevada and Colorado, are used together, they both become stronger, creating a spiritual alchemy. Instead of simply adorning their wearers, they also guard them from evil. Contemporary Navajo artists use this blue-to-green mineral extensively, boldly, and with great flair. Turquoise essentially enhances, but never overpowers, their true passion, silver. 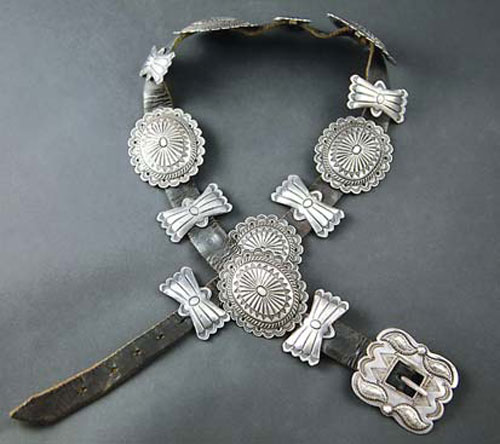 One of the first Navajos to set turquoise on silver was Astidi Chon in around 1878. He passed this skill on to other Navajos, which was disseminated to other tribes.

Conchas, large oval or round silver plaques that also reflect Moorish and Mexican influence, typically feature scallops or painstakingly hand-stamped small, repeating designs around their borders. Some also feature fluted, domed centres, formed by gently hammering them on rounded dies from the reverse side.

Strung together along a leather strap, these heavy, shell-like slotted ornaments became massive belts. As Navajo artists became adept at soldering, they added metal back loops, often replacing the conchas' slots with bits of turquoise.

Many Navajos, like their Mexican neighbours, also decorated their horses' bridles with silver. Describing a particularly ornate confection of multiple conchas enhanced with multiple najas, one observer noted wryly, the 'horse must have felt very well dressed in this rig.'

The Navajo Nation, whose sixteen million acre reservation stretches across three states, has traditionally depended on Anglo-American administered trading posts for contact with the outside world. The relationship between trader and Navajo was - and continues to be - symbiotic. Traders provided Navajos with much of their food and clothing, and also with artisans' tools.

In 1890, when the government passed a law forbidding defacement of US currency, traders secured purer, softer Mexican pesos for their silversmith customers. When the artists completed their finished pieces, they sold them back to the traders, who, in turn, marketed them to tourists and collectors. Traders at Navajo Nation trading posts also accepted silver jewellery as pawn, collateral for groceries or cash.

Come spring, hard-pressed farmers might swap their heavy silver bridles for seed money, expecting to redeem them at harvest time. Women might trade their prized turquoise rings and bracelets for brightly collared bolts of velvet, treadle sewing machines or sheep.

Tribal leaders and medicine men might borrow back their silver hatbands and massive concha belts in time for summer ceremonies and dances. When the good times were over, however, their treasures usually returned to the trading post's pawn racks, until the next time around. If these items were not claimed within the contracted time, sometimes up to six years, however, they became 'dead pawn,' which traders were authorised to sell at a profit.

The system is still in operation. Navajos pawn their silver when necessary and since they usually redeem them in time, these family treasures rarely reach the general market. No wonder pawn silver, some well over a hundred years old, is widely sought and wildly expensive.

While the term 'pawn' may elicit visions of inner city poverty, Navajo pawn exemplifies Native American culture at its finest. Since Navajos created it for Navajos, these pieces embody personal and tribal history as one.

As the railroad, criss-crossing America, helped speed the introduction of crafts and curios from coast to coast, demand for Navajo silver increased. Techniques and tools continued to improve too. By 1900, concha belts featured silver spacers and decorative buckles, as well as an abundance of repousse work, patterns hammered in relief. 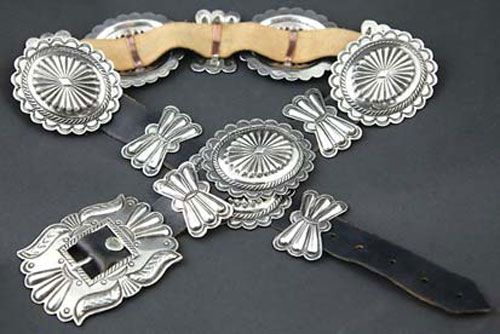 Turquoise stone consists of hydrated copper and aluminium phosphate under high pressure. Its history spans thousands of years and crosses the globe from China, where it was valued as second to jade, to Mexico where the Aztecs reserved it solely for their gods. In other cultures, it is seen as a protective talisman against the evil eye.

Archaeological excavations reveal that ancient turquoise beads uncovered in South America originally came from the Cerrillos turquoise mine near Santa Fe. The majority of stones from New Mexico mines have a greenish cast to them.

Platero is the Spanish term for silversmith. In Mexico and New Mexico it was applied to anyone working with silver or gold in the production of flatware, hollow ware or jewellery.

Perhaps the best advice is to purchase Native American pieces from reputable members of the Indian Arts and Crafts Association, which markets only hand-made, authentic pieces of Native American jewellery. Alternatively, when considering purchases at powwows, exhibitions, museums, or through the internet, one might request either proof of compliance with the 1990 US Indian Arts and Crafts Act or a certification of authenticity of the materials used, the artist's name, and his tribal affiliation. 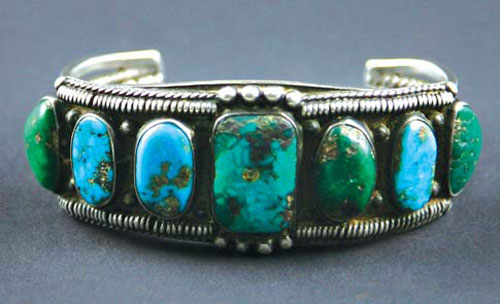 Navajo Turquoise and Silver Bracelet, circa 1920

Silver jewellery continues to play a vital role in Navajo society. Craftsmen still cover debts with silver bracelets and necklaces. In family disputes, contestants routinely don as much silver as they can muster, to demonstrate their wealth and power. At ritual healing ceremonies, medicine men glitter with confidence-inspiring assortments of silver bow guards, hatbands, concha belts, bolos, rings, necklaces, and earrings. Families often own thousands of dollars worth of silver jewellery, including the domed silver coin buttons adorning their coats. Some take these treasures to the grave.

Navajos have always eked out their livings from a combination of subsistence agriculture and herding. Yet nearly all are also artists, who paint, pot, weave, or silversmith everyday beautiful objects. Beauty, to the Navajo, is not so much in the eye of the beholder as in the mind of its creator and in this relationship to the created. They do not actively look for beauty, rather Navajos generate it within themselves, and then project it onto the universe.

WHAT YOU CAN EXPECT TO PAY

Designs by contemporary Navajo artists such as Jesse Montaya can command prices in excess of $24,000.

Early pieces made in the first quarter of the 20th century will sell between approximately $2000 and $6000. These estimates are given in US dollars.