P.A. Nisbet: In Search of the Spiritual

P. A. Nisbet travels from Arizona to Antarctica to paint the forces of nature.

Near the bustle of traffic on Canyon Road in Santa Fe, NM, a small adobe building hides away on quiet Garcia Street. In the 1920s artist John Sloan used it as a studio during his summers in the city. Today the one-room structure is occupied by another painter, P.A. Nisbet, whose stark works capture landscapes — the cool blue sky, stalward cactus, and rusty-red soil of the southwestern desert — that have remained unchanged since Sloan’s day.

A fading pair of snake-eyed dice is painted on the front door; it seems that in the 1920s the studio doubled as the local craps club. Inside, north-facing windows some 10 feet tall let light into the room, onto its wooden floors and doors and a kiva fireplace in the corner. Nisbet’s art books take up much of the space, as do his easel, paints, several large works in progress, and numerous small oil sketches on the wall. And then there’s the 50-year-old painter himself, with his direct blue eyes and warm, ready smile, whose solid build fills the space before his easel. 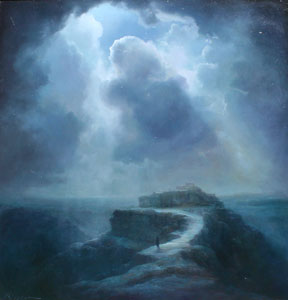 For an artist who’s known for his paintings of desert vistas, it seems ironic that Nisbet’s art career started in the middle of the ocean. After graduating form the University of North Carolina, Chapel Hill, with a degree in history, Nisbet received a commission in the U.S. Navy and served as a line officer at sea, including a 10-month tour of duty in Vietnam. He had enjoyed painting since he was 10 and kept it up during his service. While in his second year, he presented a painting of his ship to the Secretary of the Navy. Two weeks later Nisbet received orders to report to Washington, DC, to become director of art services for the Navy’s Office of Information.

After Nisbet completed his four-year duty in 1974, he worked for eight months at a Washington, DC, graphic arts firm, then founded hie own freelance commercial- art business, which eventually had more than 25 national organizations as clients. But Nisbet was drawn to wide-open spaces. While traveling to Sand Diego in 1974, he had passed through the Sonoran Desert and had been moved by its austere beauty. "I say parallels between the ocean and the desert; they echo one another," he says. So in 1980 Nisbet packed up and moved to Phoenix, AZ, to paint desert landscapes.

Since 1985 Nisbet has called Santa Fe home, but he returns often to Arizona. He’ll throw camping equipment into his four-wheel-drive truck and spend weeks exploring the lower Sonoran Desert. Nearly inaccessible, this arid terrain is marked by extensive lava fields, volcanic cones, craters, arroyos, and vast stretches of desert. It is a dangerous, thorny land but a rich one, and Nisbet is often awestruck by it. "My vision explodes outward into the vast blue vault of deep space," he once wrote in his journal as he reached a mountain summit. "One can never reach the horizon. It is forever elusive, like fleeting clouds. The earth appears translucent, and I begin to perceive layer upon layer of color as the ground falls away to the horizon. These layers are similar to thin sheets of stained glass interacting with one another to create the sensation of transparency. 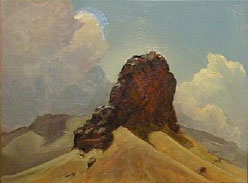 While the desert will always be a favorite of Nisbet’s, he has since discovered two other regions that have profoundly influenced his work — the Grand Canyon and Antarctica.

Nisbet is one of few artists who have ventured into the wild, pristine wilderness of Antarctica. In 1995 he received a grant to participate in the National Science Foundation’s Antarctica Artists and Writers Program. For several months he worked out of McMurdo Station on the edge of the Ross Sea. The shelters used by early British explorers Robert Scott and Sir Ernest Shackleton are still near there, he says, everything in them still intact.

Nisbet’s initial reaction to Antarctica was shock. "The sky is ashen, a uniform dome of dead tonality broken at the horizon by long finger clouds that scrape the surface of frozen McMurdo Sound," he wrote in his journal. "Everything is vast and undefined, a classic surrealist nightmare. Of the many landscapes I have witnessed in my life, this is the most dreadful, purgatorial apparition of them all." But Nisbet quickly succumbed to Antarctica’s spell, especially when he made a trip to the South Pole.

"What makes Antarctica special is that there are few distractions to dilute the awesome power of natural beauty," he says. "It comes in massive doses of brilliant light, vast crystalline distances, and chromatic intensities strong enough to make a grown man cry." 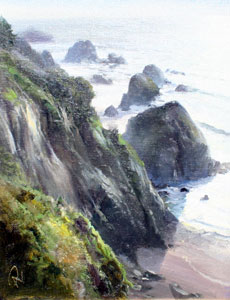 Before departing for Antarctica, Nisbet had ventured into the back country near Telluride, CO, under blizzard conditions to see if he could paint during extreme weather. It was nearly impossible. Thus Nisbet created a painting system for the subzero conditions of Antarctica: When temperatures dropped below minus 20 degrees Fahrenheit, he would put his oil paints aside and instead choose shades from a swatch book of 2,700 colors, noting his choices using a tape recorder or notepad.

While in the field Nisbet used this system as he explored the ice walls of the Barne Glacier, the high reaches of Mount Erebus with its smoking volcanic plume, and the fractured ice pack of the Ross Sea. Back at McMurdo he would try to replicate his experiences in oil sketches. After 3 months, Nisbet returned from Antarctica with 40 paintings. One of them was selected for the dustjacked or science-fiction writer Kim Stanley Robinson’s latest novel, Antarctica.

More recently, Nisbet has investigated the gorge created by the Little Colorado River, where it swings northwest past the uplift of Gray Mountain to eventually join the Colorado River, 50 miles downstream. The Little Colorado River has carved a dramatic, precipitous canyon in the dark volcanic formations; Nisbet can stand along the canyon edge and look straight down 3,000 feet. He is creating small oil sketches of the sheer walls, showing how light and shadow interact among them and the surrounding terrain.

These landscapes — the desert, the canyon, and a land of ice spires — may seem merely like interesting places on a map. But for Nisbet, and for his art, these three regions speak less about geography and more about psychology and spirit. 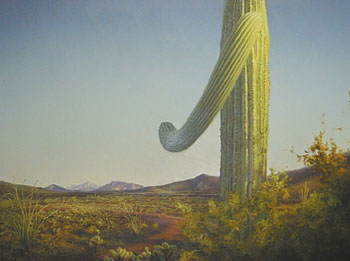 Nisbet is self-taught, strongly influenced by the landscape painters of centuries past, the romantics who reacted to the loss of nature by depicting it as a place of spiritual redemption. He credits J.M.W. Turner as his most powerful inspiration; others include Caspar David Friedrich, Fredrick Church, Thomas Moran and John Kensett.

The influence of these artists can be seen in his careful process. Before starting a sketch in the field, Nisbet walks the landscape for an hour or more. Then he paints small sketches — a sort of visual shorthand — on masonite or sections of pre-cut, rolled canvas that he tacks onto a board. When finished, they dry in a box. Back in the studio, the field sketches inspire larger paintings that are created with multiple layers of paint and glaze.

Expansive vistas and towering clouds, as well as the subtle qualities of depth and light, mark his paintings. Nisbet tries to capture the ethereal spirit and deep space of a specific landscape. One technique he uses to accomplish this is to slightly curve the horizon so it appears to be viewed from high above.

"My paintings are not exclusively about nature." Says Nisbet. "They are about my relationship with nature, which suggests an interaction — not a description of something external to self," says Nisbet. "Furthermore, I believe the purpose of art is to illuminate a spiritual source." As such, Nisbet’s paintings are a way for him to personify that which amazes him. Like another, earlier traveler of desert landscapes, painter Maynard Dixon, Nisbet is touched by an unknown presence. He is drawn to excursions into lands where few go by his quest to discover the underlying forces of nature.