“As a young artist you always dream of major pieces that are really you. It’s been twenty-five years and I think I’m finally approaching the point where people will recognize an Oreland Joe when they see it.”

Indeed, Joe counts some of today’s top Western artists among his best collectors. Joe says they like the realism and the detail of the pieces. Currently, as well as working with bronze, Tennessee marble and alabaster, he has discovered a new kind of stone, Portuguese Yellow marble, that is fueling his unique creativity.

One of his new Tennessee marble pieces is called First Mesa Hopi Maidens. “It’s two Hopi women. It’s a very contemporary, very fluid piece representing women of the Hopi nation. The hair ties are very interesting. When they wear them like they are in the sculpture, they’re saying they’re ready for marriage.”

Joe has also created a traditional alabaster for the show. “I have a piece called Spirit Eagle. It’s a little alabaster bird. That will be my only wildlife piece. I travel a lot; I’m always searching the sky for a good sign. When you see a Bald Eagle or a Golden Eagle you should make an offering. So I carry tobacco with me. That’s what Spirit Eagle is about.”

Joe, who is part Navajo and part Southern Ute, naturally makes sure his pieces are culturally correct and accurate. To that end, he does extensive research and spends a lot of time drawing.

“I have three or four hundred drawings. I’m drawing all the time. Those that speak to me are those I want to carve. All of the drawings are Native American—male, female, families, children, goats, and dogs—traditional reservation life. I like the period of a hundred year span between 1820 and 1920. There was a lot of change within five years when people got put onto the reservations. It changed life from hunting to soldiers bringing food.” 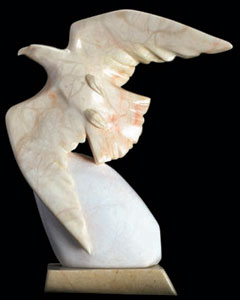 Not only is Joe meticulous about his research, he’s equally passionate about his raw materials. “I’ll buy alabaster in Utah or marble from a place in California that imports the stone from Europe. Before I buy the stones, an apprentice or I tap them with a hammer to make sure they ring. If they do, we bring them back here to the studio.

“The marble that comes from Europe has already been aging for four or five months. But the alabaster from Utah needs to set and breathe for two or three months. After that, it’s checked again by the apprentice. I’m looking for a solid stone because I do a lot of intricate work on face and hands and I’d hate to have a flaw. It’s like canvas—it’s ready to draw on, take measurements, head proportions, body proportions. 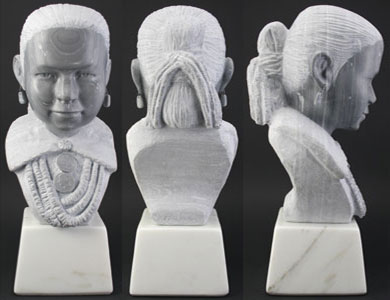 “I draw on the stone first, and then have the apprentice block out the stone, making straight cuts all the way around with a 16” or 9” grinder until the stone is a cube. Generally, the apprentice stays an inch away from the drawing so that allows me to move. I have an apprentice who is a sculptor too, so I might let him get a little closer than that. Then it’s all mine after that.”

That technique, drawing first and then blocking out, is something Joe learned while training in Italy in the mid-1980s. “Before, a lot of carvers would go by the shape of the stone. When I studied we were given square blocks. I’m a figurative artist. You have to fit the shoulders in right, nothing can be exaggerated.”

Despite his success, Joe insists there are always new horizons to conquer. “I’m introducing new stone. That means there are always new textures, and new challenges. There are collectors that are always looking for new ways of presenting a piece. It’s about outdoing yourself. The Portuguese Yellow (the new stone with which Joe has been working) has only been on the market for a year. It’s very hard. It’s got a magnetic ability now. It’s a stone that speaks for itself.”

For his new show, at least two of the pieces will be carved from the Portuguese Yellow marble and, at press time, Joe was still working on them. He described the first piece as a 24 x 36” figure. “It’s a lady reclining, resting on one arm. She’s going to be an Apache woman. She’s resting with her buckskin dress, moccasins, jewelry and maybe a pot or two to balance out the weight on the sculpture.” 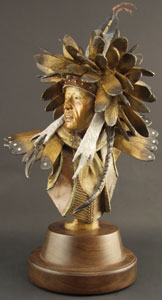 The other Portuguese Yellow sculpture is Joe’s most ambitious work to date. “It’s a 5’ tall female figure, Navajo. She’s standing in a blanket. This is the largest piece I’ve ever done. It will weigh 1,800 pounds.”

Joe's work speaks for itself, and he feels no need to dwell on his heritage. “I’m a sculptor who happens to be Native American. I study other cultures and pieces, and it seems like our language as artists is the same. We’re trying to preserve whatever we’re trying to preserve. To be invited to these shows is based on art, not race or affiliation.”

For Joe, it’s all about challenging himself and creating the best work he can. “It’s always improving the work—always pushing. Whether or not I make a good sale during the weekend, I’m still here Monday morning at nine."

And for that, fine art aficionados everywhere are grateful. 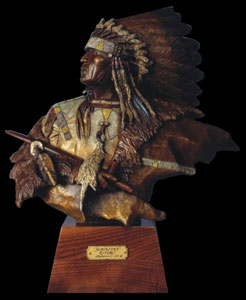