Symbols of the Land

Efforts to preserve and reintroduce the artistic tranditions of the Northwest Coast Indian art create objects of unique and lasting beauty.

Northwest Indian art is, perhaps, the most recognizable of the work produced by North America’s native peoples. The Pacific Northwest Coast runs 2,000 miles from northern California to Alaska and was home to over 70 tribes. The tribes traded among one another and adopted some stylistic changes while retaining their own specific imagery. The designs we associate with the region are often based on the crests of specific clans and were traditionally used only by that explicit clan.

What we now refer to as art were the artifacts of daily life and ritual, imbued with significance and made with great skill. Between the end of the 18th century and the early years of the 19th century, sailors traded metal for some of these artifacts, which found their way to the East Coast and to Europe. Capt. James Cook collected ethnographic material on his exploration of the coast in 1778. The tribes were anxious to receive metal objects in trade for their artifacts. 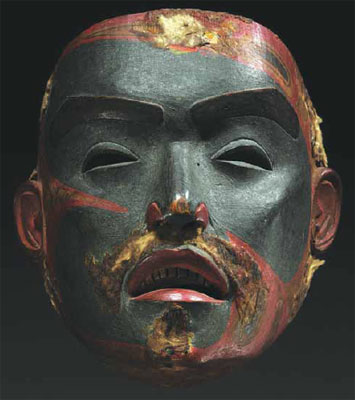 The traditional trade in sea otter pelts died out with the arrival of European, Russian, and American trappers and the near extermination of the otter. Trade in artifacts continued, however, and carvings were made for souvenirs with the same skill and inspiration.

The finest of old ceremonial pieces and the best contemporary work are receiving intense interest. In 2006, a Tsimshian polychromed wood face mask sold for $1,808,000 at auction. It is difficult to determine the original meaning of the extraordinary mask. The meaning of masks varied from tribe to tribe and, sometimes, from person to person. They were used, generally, to represent supernatural powers and beings. This Tsimshian mask is made more unusual by its glowing patina achieved by the addition of large amounts of graphite to the paint. 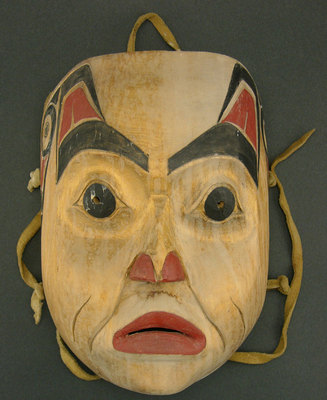 Henry Green is a contemporary Tsimshian wood carver. Active in preserving the traditions of his tribe’s culture, he carved Eagle and Human Totem to celebrate one of the most important family crests of the Tsimshian Nation – the others being the killer whale, the wolf and the raven. His 8-foot carving Eagle and Human Totem depicts the totemic eagle with a human in his belly, celebrating the closeness of man and the rest of nature. Early missionaries to the area thought totem poles were used for worship, but each pole tells the history of a clan or illustrates a legend or an important event.

Chief Lelooska’s name means “He who cuts against wood with a knife.” Of Cherokee descent, he was adopted into the Kwakiutl tribe of the Pacific Northwest. Lelooska said, “Our grandfather advised us to take the best of both worlds – the Indian’s and the non-Indian’s – and combine them so that they would complement and enrich each other. This we have done, but, always, our ‘Indianness’ is the focus of our lives.” 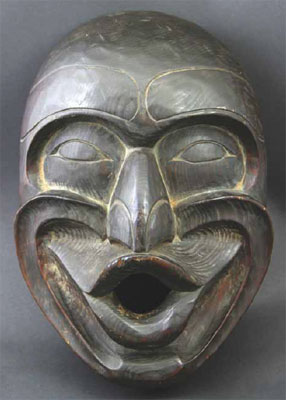 In his artwork, Preston Singletary brings a new medium to his Tlingit heritage.

“I sometimes hope that people will view my work on other levels not associated with ‘ethnic art.’ At the same time, it is this inspiration that gives my work its power. I see my work as an extension of tradition and a declaration that Native cultures are alive and developing new technologies and new ways of communicating the ancient codes and symbols of this land.”

His glass Tlingit Crest Hat has its origins in the hats of the region that were woven from spruce roots and painted with the crest of a particular clan. Tlingit baskets were often decorated with grasses and ferns creating a “false embroidery” that appears only on the outside of the basket. Many of Singletary’s glass vessels reproduce these designs as well as the texture of the woven basket. Other baskets rely on gradations in the color of the spruce roots for subtle patterns.

The Nez Perce lived inland from the Northwest Coast. After Lewis and Clark encountered them in 1806, the Nez Perce showed the explorers the way to the coast and began to set up trade relations. They had previously been trading with other Indians from the Columbia River Plateau and acquired glass beads that they used to apply intricate patterns to their clothing. Lewis and Clark brought green and red beads, which the Nez Perce began to incorporate into their designs.

The Nez Perce call themselves Nimiipuu, or “The People.” “Nez Perce” or Nez Perce” is a misnomer applied by the French who confused the tribe with another whom they called “those with pierced noses.”

The efforts to keep alive and to reintroduce the artistic traditions of Northwest Coast Indian art are creating objects of unique and lasting beauty. 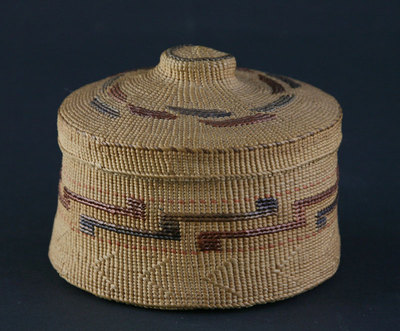