P.A. Nisbet Pieces Receive Awards in Quest for the West

Among the many awards bestowed during opening weekend of the 2012 Quest for the West exhibition and sale at the Eiteljorg Museum, this year's Harrison Eiteljorg Purchase Award was granted to P.A. Nisbet's Beneath the Blue Moon Bench, a dramatic oil work that will now become part of the museum's permanent collection. "The Eiteljorg Museum is pleased to add Peter Nisbet's wonderful painting to the permanent collection," says James Nottage, vice president and chief curatorial officer at the Eiteljorg. "The artist's approach to delineating and expressing the landscape results in consistently beautiful works that appeal to both the eye and the imagination." 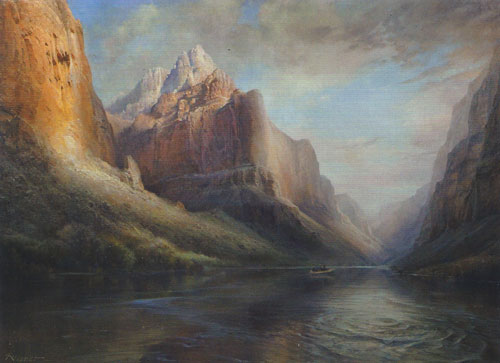 Nisbet's works thematically aim to capture the elements of landscape in relationship to weather patterns and the shifting light that creates dramatic moments. The artist works from direct experience as well as the memory experience leaves behind when he composes a new piece. Beneath the Blue Moon Bench, completed earlier this year, is no exception to his signature style and technique. "It represents a mythological notion of traveling through the river of life," Nisbet says. "River trips are the same thing as the notion of journeying through life. The river just takes you. Many things happen on the way through." Although the painting is based upon an actual location—along the east side of the Colorado River near the end of Marble Canyon—the completed piece is a composite of numerous places in the Grand Canyon area.

"It represents what one feels," Nisbet explains, "but if you were to search for that particular place you wouldn't find it." 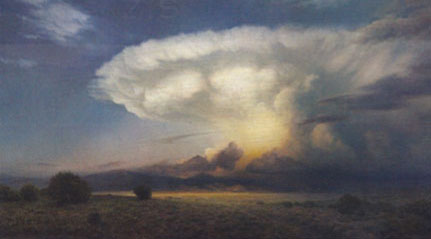 The Quest for the West's Artists' Choice Award also went to Nisbet for Sovereign Sky.