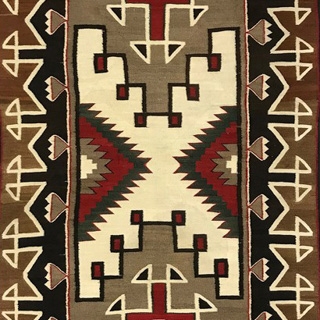 Teec Nos Pos is a regional Navajo weaving area located on Arizona Route 160, close to the Four Corners region. Weavings from this area involve striking bold designs with complex borders. Weavers from this area on the Navajo Reservation were exposed to Persian rugs in the 1920-30s. Navajo weavers have taken Middle Eastern designs and integrated them into their own Navajo world of objects and motifs.

Rugs from the Teec Nos Pos trading post region have a distinctive style originally influenced by Persian rug motifs and colors. Common design elements you will see in Teec Nos Pos rugs are multiple borders featuring intricate hook and stylized tulip designs. The weavers in this area tend to use lots of colors - often in bright green, blue, and purple colorations. Teec Nos Pos weavers also frequently make rugs in the unusual runner size (meaning a rug three to four times longer than it is wide).

With regard to older weavings, Teec Nos Pos rugs from the 1915-1940s timeframe are particularly notable for their use of very fine hand-spun yarns. After this period, weavers would often incorporate commercial yarns, though there are still some Teec Nos Pos weavers that use hand-spun.