Large Navajo rugs have been made since the turn of the century after the trading post system had become integral to the commerce of the Navajo reservation. Very large antique Navajo floor rugs are rare, especially those that measure over 10 feet long. They would have typically been woven as commission pieces, with a buyer working with a trader at a trading post to obtain a specific size and design. The trader would work with a particular weaver to have the rug made.

Weavers selected for these commissions would be the best in the area because such a rug typically took a year or more to complete. Not only was the weaving a tremendous job - done on massive looms that could have been 10 to 20 feet long - but earlier vintage large Navajo floor rugs would have been made from hand-spun yarn, which could be a significant part of the time involved. Vintage Navajo floor rugs over 10 feet in length are difficult to find. As you can imagine, large antique Navajo rugs are quite pricey today, given their rarity and the artistry involved in making them.

Trading posts like Ganado and Klagetoh in Arizona (both originally owned by Lorenzo Hubbell) would have provided many of these large Navajo rugs. J.B. Moore at Crystal in northwestern New Mexico had a thriving catalog business and undoubtedly would have taken orders for large rug commissions.

The Teec Nos Pos trading post in northeastern Arizona was known more for runner-shaped rugs (characterized with length three to four times the width), but many of these runners were also well over 10’ long and could take over a year to make.

In the 1950s-80s some of the largest rugs woven on the reservation came out of Chinle and Wide Ruins, regions known for weaving all-natural, hand-spun rugs. The popular colors from this time frame were golds, browns, yellows, and green.

Large vintage Navajo rugs are typically quite sturdy. A popular feature at early 20th century World’s Fairs was a huge Navajo rug at the fair entrance. Close to a million people would walk over these rugs during the fair, and the weavings would withstand the foot traffic well, only needing a cleaning afterward, so they are quite durable.

Dr. J. Mark Sublette, CEO of Medicine Man Gallery in Tucson, Arizona introduces you to large vintage Navajo rugs. These antique Navajo rugs were often made on commission by weavers and are rare finds for the collector. These rugs were woven on huge looms that could sometimes reach over 20 feet long. Large Navajo floor rugs were a common sight at World Fairs, with over a million people walking over them during the course of the fair.

The proper care of Navajo rugs and blankets

Large antique Navajo rugs tend to be very sturdy, as they were woven for use on the floor. That being said, it is important to know how to properly care for a vintage Navajo rug, including the dos and dont’s of vacuuming these rare weavings. In this video, Dr. J. Mark Sublette, CEO of Tucson’s Medicine Man Gallery, will discuss how to care for your Navajo rugs and blankets as well as the proper placement in your home to avoid sun damage.

In this article, Dr. J. Mark Sublette discusses the history of the diverse styles of Navajo rugs, including those from trading posts where large Navajo floor rugs were often made, including Ganado, Klagetoh, Chinle, and Wide Ruins. Read more... 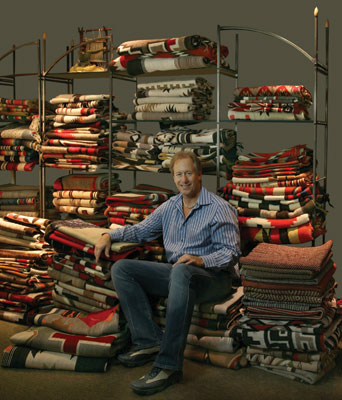 In this article, Dr. J. Mark Sublette of Medicine Man Gallery provides an overview of Navajo weaving, including information on Lorenzo Hubbell, former proprietor of both the Ganado and Klagetoh trading posts and J.B. Moore of the Crystal trading post - all places were large Navajo floor rugs were regularly commissioned.Read more...

The Medicine Man Gallery in Tucson, AZ, has one of the largest collections of antique Navajo rugs in the United States, including large floor rugs measuring over 10 feet in length. All vintage Navajo rugs have been authenticated by Dr. J. Mark Sublette, a leading expert on Navajo rugs and blankets.