A selection of paintings illustrate the grand majesty of our National Parks.

"National parks are the best idea we ever had.  Absolutely American, absolutely democratic, they reflect us at our best rather than our worst." - Wallace Stegner (1909-1993)

According to the National Park Service, the history of human habitation in the area of what is now Yellowstone National Park goes back 11,000 years. In 1872, influenced by exploration and moved by the photography of William Henry Jackson and the paintings of Thomas Moran, Congress created the park, the first national park in the world. Straddling Wyoming, Montana, and Idaho, Yellowstone now attracts over 3 million visitors a year, the second highest of nearly 400 national parks, which receive over 275 million visits a year.

Beating out Yellowstone in the visitor category by nearly a half million is Yosemite National Park, which was opened in 1890 along California’s Sierra Nevada.  Just south of Yellowstone, Grand Teton National Park was created in 1929. In 1950 the park was merged with Jackson Hole National Monument to create the park we know today. Wallace Stegner (1909-1993), a writer and environmentalist who won the Pulitzer Prize for Fiction, said of the parks: “National parks are the best idea we ever had. Absolutely American, absolutely democratic, they reflect us at our best rather than our worst.”

Yosemites’ waterfalls and granite peaks sculpted by the glaciers, Yellowstone’s geysers and hot springs, and the Grand Teton’s craggy mountains and pristine lakes have attracted artists since their discovery. 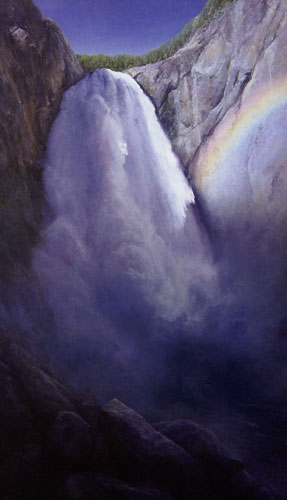 P.A. Nisbet also gets close to his subject in his painting Lower Falls of the Yellowstone, depicting the power of the falls and only suggesting its context. The force of water has broken off the chunks of stone in the lower left and the delicate rising mists refract the sunlight into a rainbow that rises to the upper right. The 48-by-30-inch canvas puts the majesty of the falls (that are nearly twice as tall as Niagara) front and center.

These and so many other artists remind us of the beauty of our national parks and of the importance of the natural landscape everywhere. Stegner wrote, “We simply need that wild country available to us, even if we never do more than drive to its edge and look in. For it can be a means of reassuring ourselves of our sanity as creatures, a part of the geography of hope.”

Santa Fe Editor John O'Hern, who has retired after 30 years in the museum business, specifically as the Executive Director and Curator of the Arnot Art Museum, Elmira, N.Y., is the originator of the internationally acclaimed Re-presenting Representation exhibitions, which promote realism in its many guises. John was chair of the Artists Panel of the New York State Council on the Arts. He writes for gallery publications around the world, including regular monthly features on Art Market Insights in American Art Collector magazine. Having succumbed to the lure of the West, he now lives in what he refers to as a "converted adobe goat shed," in the high desert of New Mexico, where he is acquainting himself with new flora and fauna.