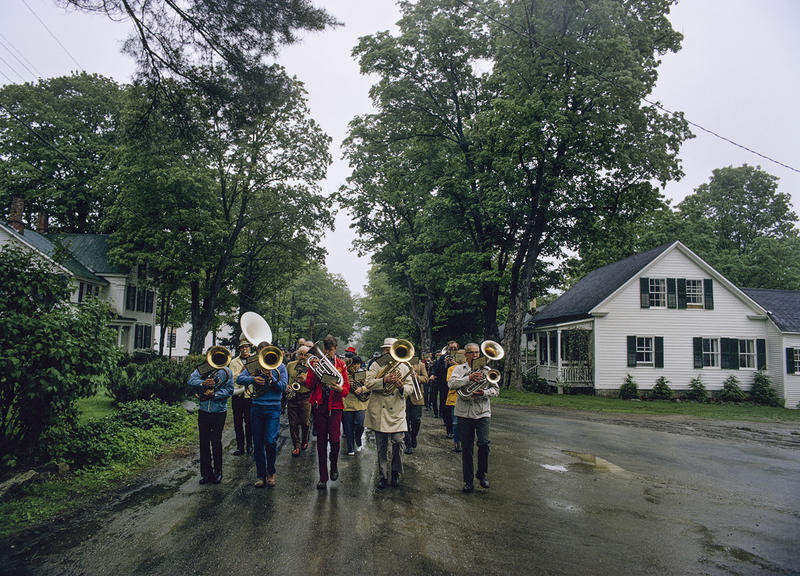 When Nathan Benn was a very young photographer in the early 1970s, he got an assignment from National Geographic to go shoot pictures of Vermont. When you look at those photographs now, many of which were never published in the magazine, they are so clearly from a different era.

Many of them are unrecognizable as Vermont, even. They look like photos that could have been taken in the Depression. But they reveal a lot about a region that was right on the cusp of change and modernization.

Benn's photographs of Vermont and elsewhere are getting a special showing in a new exhibit at the Shelburne Museum called Kodachrome Memory: American Pictures, 1972-1990.

“My picture of Vermont was formed based on an iconography that had been developing over 100 years of Yankee characters – flinty, thrifty, industrious Yankee characters,” Benn says. "And, you know, fall foliage and clapboard churches with steeples.”

It was exactly that iconography that drew Shelburne Museum Director Thomas Denenberg to Benn’s work.  “What I so love about this project is that it captures a specific moment in time in Vermont before suburban sprawl, urban sprawl, before Pizza Hut and chain stores came here,” Denenberg says. “This sort of shows us the last of that moment of the invented ‘New England’ that is Vermont and the beginning of the Vermont of today.”

The change in the fabric of Vermont’s culture was precipitated by a wave of migration from city-dwellers who to flocked to Vermont in the 1970s. They were, according to Denenberg, “both back-to-the-land folks who want to live off the grid, live in the commune, and … IBM engineers.”

Denenberg says Benn’s photographs capture the moment before the effects of the Back to the Land Movement and other in-migration fully manifested themselves; they document, perhaps, the last vestiges of that stereotypically “rural” Vermont. 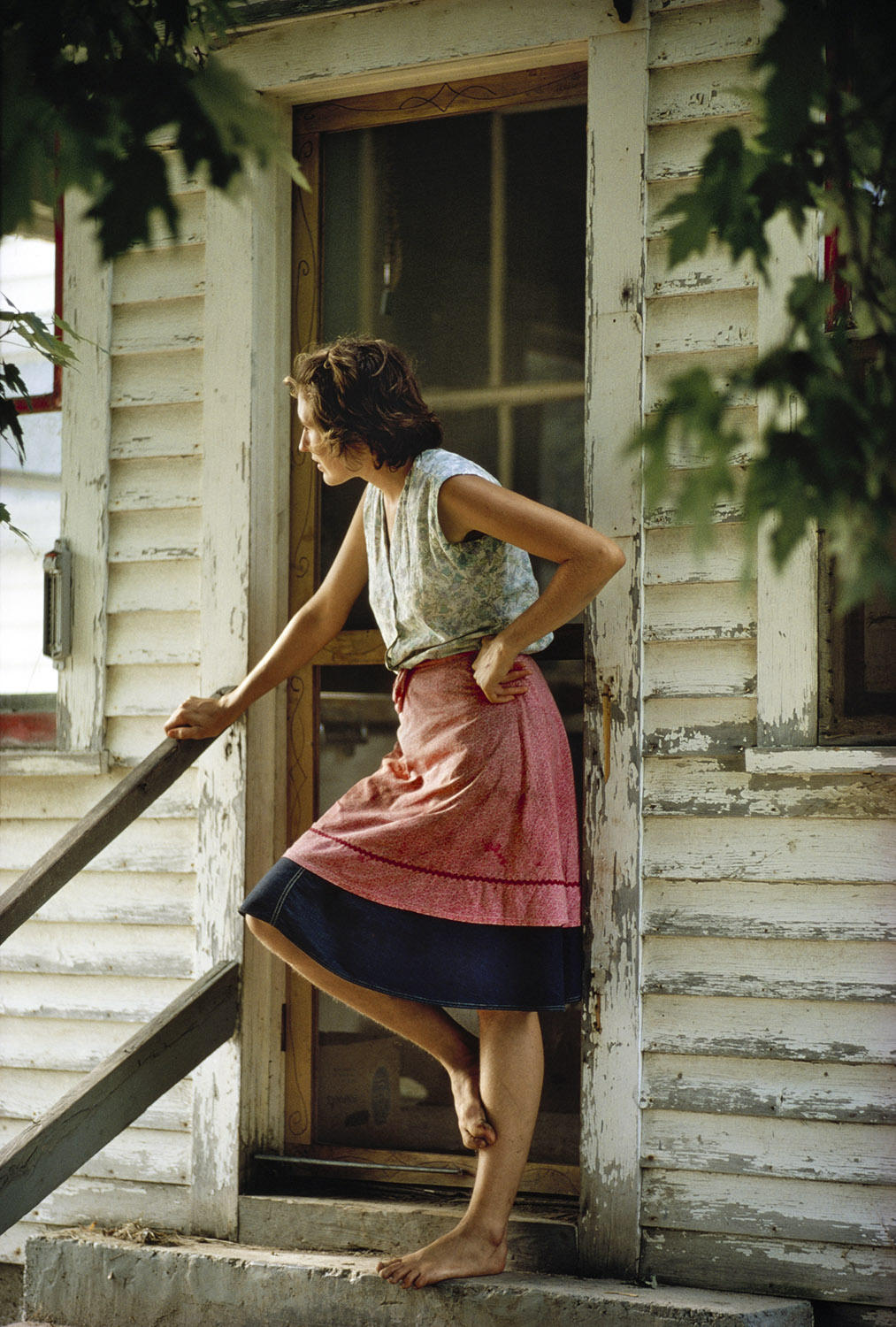 “There was this real cottage industry from the mid-19th century until about World War II that gave us the image of New England … When [Nathan] came to Vermont in 1973, what he captured so brilliantly is sort of the end of that era, and then also the beginning of new [era] where Vermont in the '70s became a place people moved to, came to,” Denenberg says.

Benn made one of the photographs in the exhibition during his first day on assignment in Vermont, at a Town Meeting in Burke Hollow.

“I was there probably for about three hours. And I photographed people arriving, I photographed from the outside as people walked to the door.  I photographed people getting settled down and people chatting. And then the marshal of the meeting picked up the flag and the board members stood up and saluted and I had an “Aha” moment. I said, ‘This has potential. This looks like it should be a photograph.’ So I hustled up, stood up on a bench, saw this moment and was able to squeeze off about three frames. I was so excited that two of them were out of focus or blurred.  And so I was fortunate to be able to get one moment. 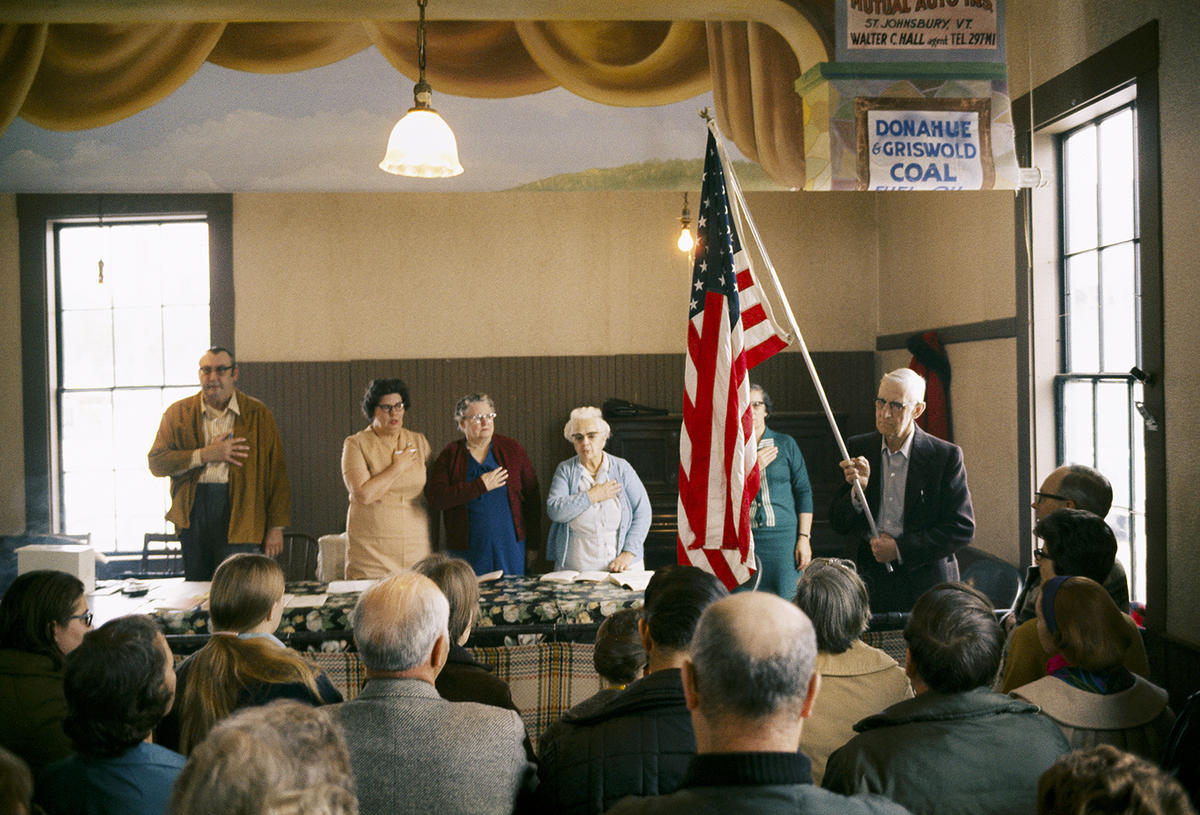 “This scene … is really is almost mythical in its sense of reverence, patriotism, solemnity, ceremony,” Benn says.

The photograph eventually found its way into a 1976 issue of Stern Magazine, the weekly German news publication. The issue was about America’s bicentennial; the lead photograph was Benn’s. “Because to their audience of Europeans, these fine, earnest, hardworking Yankees holding the American flag in this village Town Meeting were really the archetype of Yankee-ness,” he says. “A caricature, almost.”

Benn acknowledges that this and other photographs of his evoke Norman Rockwell, the 20th-century painter whose renditions of small-town New England life often appeared in LIFE magazine. “My image of Vermont, my recognition of the opportunity here, was informed certainly by Rockwell and Wallace Nutting and other arbiters of our taste of what Yankees are supposed to look like. And well, these people really did look that way,” Benn says. “I’m very fond of these people. And I’m so glad – I feel privileged – that I was able to witness a scene like this. And I feel lucky that I was able to record it in 1/15 of a second.”

But not all of Benn’s photographs are portraits. One shows a part of the Central Vermont Railroad engine shop, where two monumental diesel locomotives are being serviced.

“I don’t know if this building survives anymore. I’d kind of be surprised if it did. But it was probably built, I’d guess, in the early 19th century if not the late 20th century. And it had an operating turntable. The locomotives would go in, get serviced, and come out,” Benn says. 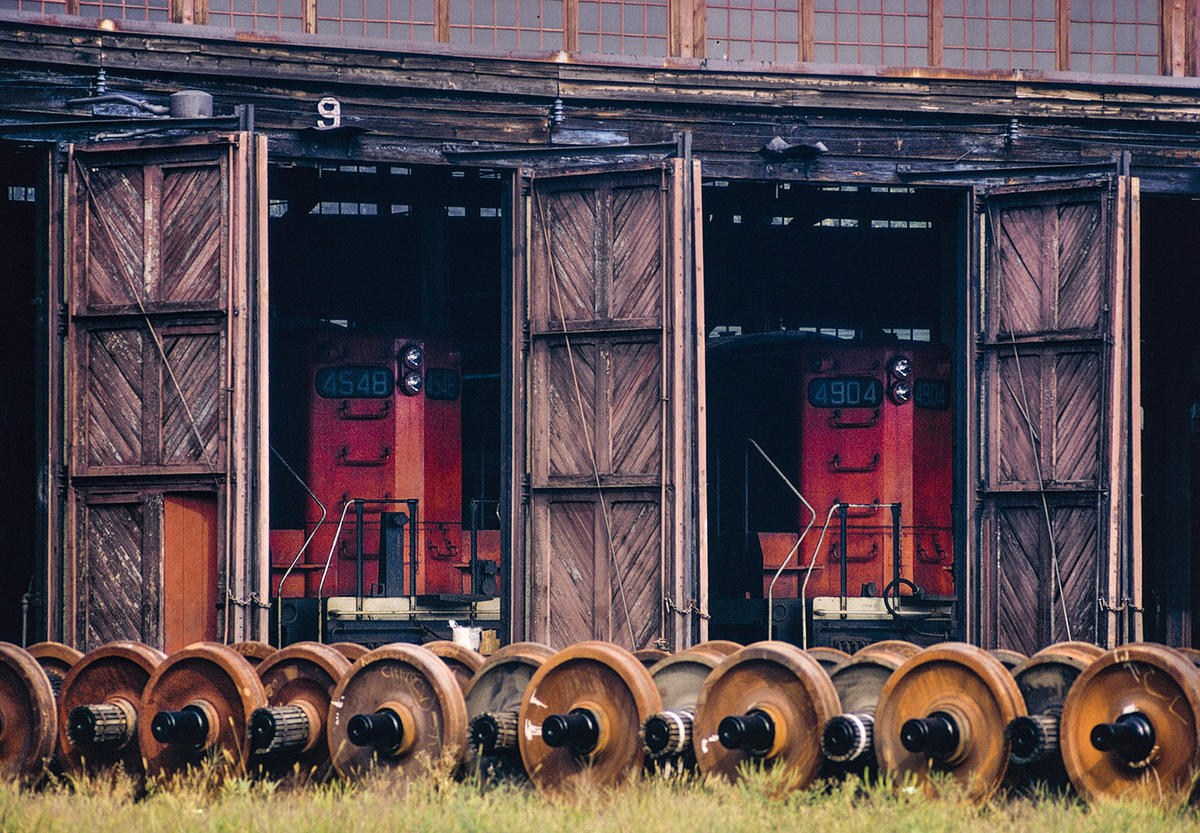 The photograph also isn’t meant to “reinforce an archetype,” Benn says. “The picture is really about design … I think that somebody looking at it would be drawn to it because of design and color and pattern.”

There are several other railroad-related photographs in the exhibition, betraying what Benn refers to as his “unreasonable infatuation with railroads.” Another photo shows a close-up of a mechanic’s hands covered with grease.

“He’s working in the engine shop. And those hands have repaired, no doubt, many, many locomotives probably going back to steam locomotives,” Benn says. “And I think the hands are – they have a roundness to them, and a sensitivity to them, and a fleshiness to them and that is emphasized by the layer of grease and grime on the fingers.” 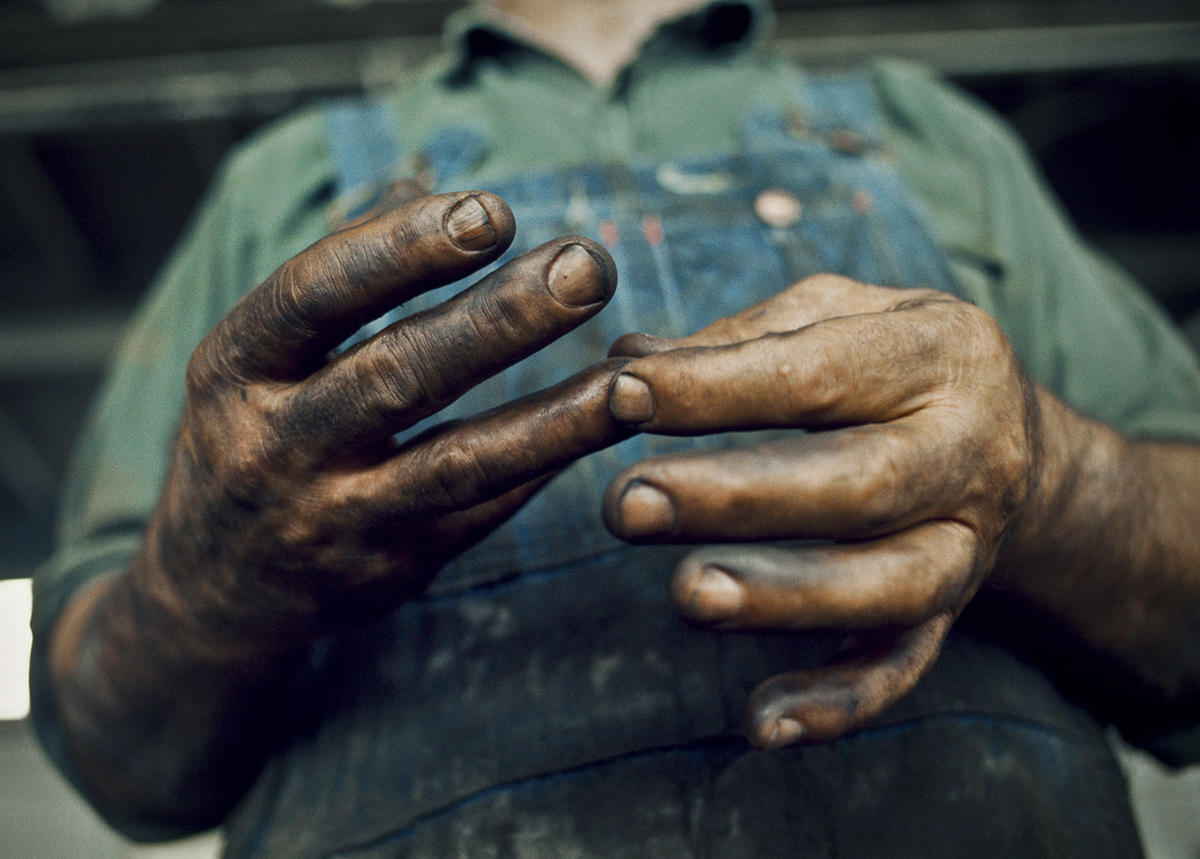 Younger viewers might not readily recognize the locomotives and railcar wheels. “And I’m glad that it’s not instantly identifiable,” Benn says. “This will certainly separate the generations as they view the show.”

Museum director Thomas Denenberg says he’s excited about the intergenerational conversation that the show will incite. “I’ve seen this before, and I know we’re going to see it here. We’re going to see parents and grandparents explaining Kodachrome to people who have never, you know, thought about film,” he says.

t's not a common occurrence at the Shelburne Museum, which typically features artists who are long-gone or unknown, to talk to the artist whose work is hanging on the walls.

Younger viewers might not readily recognize the locomotives and railcar wheels. “And I’m glad that it’s not instantly identifiable,” Benn says. “This will certainly separate the generations as they view the show.”

“It exponentially opens up our understanding,” says museum director Tom Denenberg. “Because everyone does approach these photographs with different perspectives and points of view.”