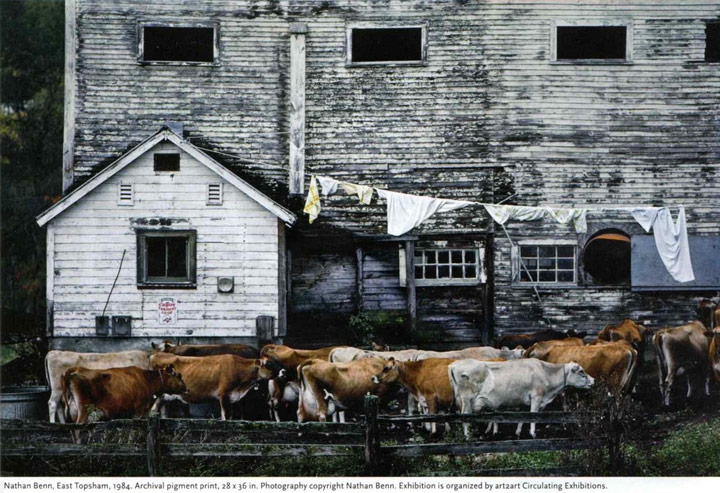 As Americans moved though the 1970’s, a profound cultural change was taking place. Kodachrome memories: American Pictures 1972-1990 depicts an America of vibrant regionalism, teetering on the cusp of the coming information age’s great cultural flattening.

Nathan Benn embraced color photography before it was considered an acceptable medium for serious documentary expression. Revisiting his archive of photography for National Geographic magazine, he discovered hundreds of unpublished pictures that appeared inconsequential to the editors of the 1970s and 1980s, but now resonate with empathetic perspectives on everyday life in neighborhoods in Florida and the farms of Vermont.

The photographs, organized by geographic and cultural affinities, delight with poetic happenstance, melancholy framing and wistful abandon. The past, an era heavily eulogized, comes alive again in its deliciously homely demeanor, and glorious kodachrome hues.

For Shelburne’s installation, Benn went back to his archives to pull more images of Vermont from his time here in 1972. Saturated with brilliant Kodachrome hues (similar to what we see today with photography apps such as Instagram), the photographs capture a special moment in Vermont’s history, when men and women from across the country “returned” to the land, before the strip malls and sprawl homogenized so much of our nation