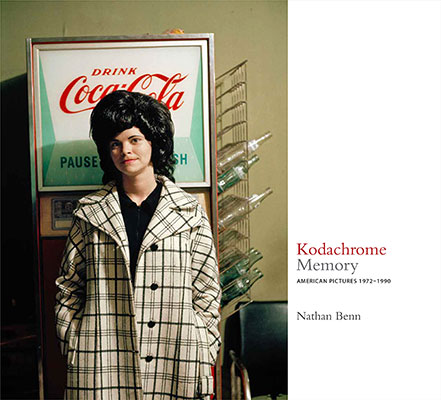 Nathan Benn embraced color photography before it was considered an acceptable medium for serious documentary expression, traveling globally for National Geographicmagazine for two decades. In revisiting his archive of almost half a million images, and editing his photographs with a 21st-century perspective, he discovered hundreds of unpublished American pictures that appeared inconsequential to editors of the 1970s and 1980s, but now resonate—in beautiful Kodachrome color—with empathic perspectives on everyday life in forgotten neighborhoods.

Kodachrome Memory exemplifies forthright storytelling about everyday people and vernacular spaces. The photographs, organized by geographic and cultural affinities (North East, Heartland, Pittsburgh, and Florida), delight with poetic happenstance, melancholy framing, and wistful abandon. The past, an era heavily eulogized, comes alive again in its deliciously homely demeanor, and glorious Kodachrome hues. Yes, this is your father's America. An essay by scholar Paul M. Farber contextualizes the creation and selection of these images, offering a fresh perspective about color photography on the eve of the digital revolution.

"Kodachrome Memory celebrates the significance of American regional diversity as it was 30 or 40 years ago, before the advent of Internet culture and before the country became one vast strip mall stretching from sea to sea. The seemingly inconsequential subjects of Benn's photographs—which are keenly observed and evocative of a time and place—act as metaphors for American culture and values. Although much of Benn's work was done for a magazine and not gallery walls, his use of color throughout holds its own with artists of the period such as William Eggleston and Stephen Shore."
—Richard Buckley

"Even if you've never seen Nathan Benn's photographs from the 1970s, they feel somehow familiar—like the refrain of a half-remembered song. With a uniquely American mix of formality and ease, and a color palette so tart you can almost taste it, Benn makes the past vividly—even painfully—present. So there's nothing nostalgic about his pictures of parades, homecomings, and town meetings, juke joints and barbershops, front porches and back roads, because you are there. Maybe that's why Kodachrome Memory: American Pictures 1972–1990 feels like an instant classic."
—Vince Aletti

"It is a happy and welcoming cruise down Nathan Benn’s KODACHROME MEMORY lane. The subtlety in images somehow communicated an intimacy now absent in the current binary techniques.  So welcome to a wonderful world now passed but not forgotten."  – Elliott Erwitt

"New Haven, Vt., 1973—What an absolutely wonderful photograph. Have not seen it before and what a pleasure to discover it….This is the kind of image you could place on a wall and every time you come upon it, make up a new story for the image. Each time you could find another reason it works. For example, notice that both arms line up with the railings on the step as does the raised thigh, while the upper left arm matches the folded leg, the whole thing making a zed (OK, zee) pattern. So many levels, so little time.”  George Barr via The Online Photographer (theonlinephotographer.com)

"That 'New Haven, Vt.' image just captures perfectly the reason why photography is endlessly fascinating, infuriating, elusive and unclassifiable. No clever perspective tricks, the subject is centre frame, colours are muted, nothing is actually happening and it was probably taken on a camera that's worth about $25 today. And yet I could look at it all day and still find new things to discover. This is the antithesis of pixel peeping, gear oriented photography. Just gorgeous." Colin via The Online Photographer (theonlinephotographer.com)

“Wow! - Sometimes I think there is simply NO END to photographs beautiful and original such as Nathan Benn's are.I don't guess I've ever seen his work before, or that I'm aware of anyway, and Kodachrome or not (and I certainly agree on all the remarks about the wracked out color) to my eyes, Nathan's is yet another example of the extraordinary, everyday originality that we could all drink in and take a lesson from.” Phil via The Online Photographer (theonlinephotographer.com)

“Seldom do I think "vintage" or "timeless" when viewing color. This shot has changed that personal prejudice.” MJFerron via The Online Photographer (theonlinephotographer.com), regarding New Haven VT 1973

"Absolutely beautiful work Nathan ~ Coming up as a young photographer your work in the Geographic has always been a inspiration. Never knew you were also a fellow Miamian ( small world ). . All The Best"  Oscar Hidalgo via Facebook

Nathan Benn was born in Miami, Florida, in 1950 and graduated from the University of Miami with degrees in psychology and mass communications. Immediately thereafter he became a photographer for National Geographic magazine, where he remained for 20 years. He was the Director of Magnum Photos, Inc., the prestigious agency of documentary photographers from 2000–2002. He is a Trustee Emeritus at the George Eastman House Museum and lives with his wife, a fine arts photographer, and son in Brooklyn.

Paul M. Farber is a scholar of visual and popular culture. He has a PhD in American Culture from the University of Michigan, Ann Arbor. Farber is one of the authors of This Is the Day: The March On Washington (Getty Publications, 2013), and his work has previously appeared in Vibe and Criticism, and on NPR. He currently teaches in the Urban Studies program at the University of Pennsylvania.