The Life of a Photographer at National Geographic Before Digital 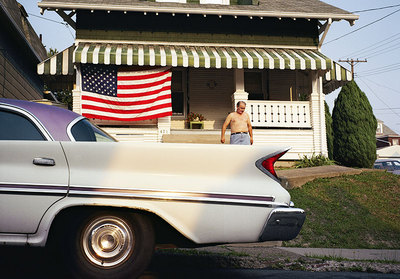 When Nathan Benn would go out on assignment for National Geographic magazine, he often had no idea what he would be photographing.

"You get the assignment, just this slip of paper, from Bob Gilka [the magazine's longtime photography director, who died in June], and you go off by yourself. You get the rental car, and you check into a hotel and unpack. Then the next morning it's, What the hell am I doing here?"

The magazine's photographers were trusted to come up with the stories - they were basically the producers. "You shot your film; you followed your nose."?

A fascinating selection of Benn's photos appears in the new book Kodachrome Memory: American Pictures 1972-1990 (published by Powerhouse Books). Benn, who worked as a National Geographic Society photographer from 1972 to 1991, has an exhibition that opened on Friday, Aug. 30, at Mark Sublette Medicine Man Gallery.

Hearing Benn's account, it is rather amazing that National Geographic, 125 years old and inarguably the most famous monthly publication of documentary photography in the world, is produced with such a casual process.

"There were 18 picture editors, and they were the people who looked at the film to pull the first pictures and kind of help consolidate and keep the photographer somewhat on track," Benn said during an interview at his Santa Fe home. "You would be assigned a picture editor at the beginning. There was no writer assigned yet, because the magazine was picture-driven. Still is.

"So you'd get this slip of paper, and it would just say Bruce McElfresh is the editor or something like that, and that's all you'd get. Then you went to his assistant, Lilian Davidson, to tell her, I'm going off to Egypt or China or Vermont, could I have $10,000 in traveler's checks? Then you go to the film guy for 300 rolls of Kodachrome or Ektachrome."

The 35 mm film was packaged in what was called "bricks" of 20 rolls. "It was handed out like water."

Some projects required Benn to do research. For a piece on Moses, his first overseas story, he read "a lot on biblical archaeology." For other assignments, the photographer relied on his news nose.

Sometimes Benn was disappointed with his work, realizing that his photos reinforced cliches.

"On my last story on Pittsburgh, I actually tried to turn that upside down. You think it's steel mills. Well, there was only one left, and I spent a week shooting it. But by 1990 I was also more self-aware and dissatisfied with what I was doing, and I asked for Pittsburgh - rather than the Soviet Union, which they wanted me to do - and I spent a week going to law offices. The fact is, there were more lawyers working in Pittsburgh than steel workers."

One of the book's Pittsburgh photos is of a framed 1888 painted portrait of the family of Henry Clay Frick, who was one of the directors of the United States Steel Corporation. On the next page is an image of a woman sitting behind a massive reception desk, her head barely clearing its top.

"I was thinking about the Old World and the role of women, the idealization of purity and the family center, and then you turn to this woman who is lost in this corporate armature."

In the same section, there is a photo of a middle-aged woman standing at a deli counter. It's a completely ordinary scene. Who is she? It's Sophie Masloff, then mayor of Pittsburgh.

"The kind of photography I was attracted to is the tradition of Dr. Erich Salomon: the miniature camera, available light, fly-on-the-wall photography."

Salomon was a groundbreaking German news photographer who died at Auschwitz in 1944.

When Benn was finished shooting photos for an assignment, he would put the 20 or 30 rolls of film in a yellow box. He would send it off to National Geographic, which sent it to Kodak, and Kodak returned the slides in yellow boxes to the magazine's film review department.

"Film review would stamp them with your name and the place, and they might tell you one of your cameras isn't exposing correctly or something's scratching your film. Then it went to the editor and then to the picture editor, and it might sit on his desk for six weeks until you bugged him."

The picture editor would choose five or 10 slides and put them into a "work box" containing images destined for use in the magazine. Then all the little yellow boxes were put into a blue box, an acid-free box, and sent to "Siberia."

That was Benn's name for the magazine's photography warehouse in Maryland.

He had never seen most of the pictures before choosing them for the book. He began the selection process by going to the warehouse and asking for the 40-some cartons of blue boxes of yellow boxes. Of the many thousands of images he made during nearly 20 years at the magazine, about 500 have been published either in National Geographic or in books.

"There are three distinct steps in the life of the photograph, and each one has a specific set of skills," Benn said. "The first is deciding where you're going to be today. Is it New Haven or Seoul, Korea, or where? Then you try to schedule with events that might be happening there."

The photo Cohocton, New York, 1975 is an example of the method. It shows a young man sitting in a tree-hung hammock, watching a drill team performing with batons and walking down a rainy street.

"I had found there was an annual tree-sitting contest and parade in upstate New York. I was doing a story about the Finger Lakes. I learned that was going to happen, and I made plans to be in that town on that day. I didn't know what I was going to get."

The second step in the process, Benn said, has to do with how the photographer uses the equipment to make a photo - in his case a Leica M4 or Nikon F. The third step is "to redact your photographs and select. I think of myself as a hunter-gatherer. That's what I did when I was out as a documentary photographer. And going through my yellow boxes, I'm still a hunter-gatherer."

After National Geographic, and after having known many of the world's renowned photographers - among them W. Eugene Smith, Henri Cartier-Bresson, and Berenice Abbott - Benn went in a different direction

"I had gotten interested in electronic publishing. I recognized that digital publishing was going to have a big impact on publishing and copyright. So I developed the idea for what became the first online stock photography company, Picture Network International. We launched the first commercial picture library online in 1993. I was the founder and president, and Kodak bought it in 1998."

From 2000 to 2002, Benn worked at another venerable photographic institution, serving as director of Magnum Photos Inc.

Benn intends Kodachrome Memory to stand as his legacy monograph. He has two ongoing projects - one about the Jewish Diaspora and the other about an ancient tomb in Peru.