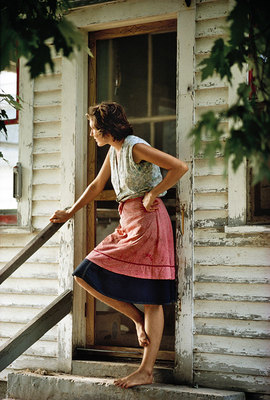 I am a native of South Florida and graduate of the University of Miami. Ever since I was a young teen and first discovered photography, my heroes were the great image-makers of the twentieth century. Wilson Hicks, the editor of Life Magazine in its days of glory, organized the “Miami Conference on Photocommunication,” which I attended from 1965 into the 1970s. At the conference I met David Douglas Duncan, Ernst Haas, André Kertész, Will McBride, Arnold Newman, and other legendary photojournalists., and developed the irrational idea that my destiny was to be a magazine photographer.

Ironically, W. Eugene Smith was also an exceptional inspiration in my quest to be a photographer. The irony is due to the legendary conflict between Wilson Hicks, as Executive Editor of Life Magazine, and W. Eugene Smith as Life photographer in the early 1950s, when Gene produced Nurse Midwife, Country Doctor, A Man of Mercy, and other landmark photo essays that remain the ultimate exemplars of “Concerned Photography.” In 1973 I ventured to Maine to meet Berenice Abbott, who introduced me to the work of Eugène Atget. I think of my two Eugenes, W. Eugene Smith and Eugène Atget, as the cornerstones of my photographic sensibility.

I had the extraordinary good fortune to serve on the photographic staff for the National Geographic Society from 1972 into 1991. During my tenure at NGS, 300 of my photographs were published in National Geographic Magazine, and hundreds more in numerous books. I am especially grateful to Robert E. Gilka, the legendary Director of Photography at National Geographic for nearly three decades. Bob hired me as a green, but eager summer intern in 1972. He tolerated my mischief with patience and encouragement and afforded me the best job in the world.

Even the best job in the world has a season and after nearly twenty years I feared burnout. At the same time, I developed an interest in emerging digital technology and began to see the challenges and opportunities for photography in digital media. I decided that 1991 would become my sabbatical year and packed up my Leicas, Nikons, and Hasselblads, put 350,000 transparencies into storage, and jumped ship.

In early 2000 I became Director of Magnum Photos Inc. During my term at Magnum we published the award-winning books RFK Funeral Train and New York September 11 by Magnum Photographers. I was fortunate to work for, represent, and develop friendships with many legendary photographers including Henri Cartier-Bresson, Cornell Capa, Elliott Erwitt, Bruce Davidson, Leonard Freed, Inge Morath, and Susan Meiselas. The idea of being the “Director of Magnum” is widely considered to be an oxymoron, but I consider my three years at Magnum as one of the richest and most satisfying episodes in my career.

In 2003 I returned to my own long neglected archive and enjoyed rediscovering and reinterpreting my images, finding many unpublished photographs that I am now eager to share. Today I concentrate on defining my own legacy and producing fine art prints. My prints are already in the collections of the Library of Congress, Corcoran Museum of Art, and Chrysler Museum of Art. PowerHouse Books is publishing my first monograph in September 2013, Kodachrome Memory: American Pictures 1972 – 1990, and my prints were exhibited for the first time at the AIPAD Photography Show 2013 in New York.

I served as a trustee for the George Eastman House International Museum of Photography and Film from 2003 through 2012, and live in Brooklyn Heights with my wife Rebecca Abrams, a fine arts photographer and our son Augie.