Roughly 15 years ago John Moyers and Terri Kelly Moyers started vacationing in Hawaii—of course they traveled with paintbrushes. After numerous trips, sometimes twice a year, they finally decided to do something with all the work they had done from the Aloha State.

“We were accumulating these things with the idea of doing a show,” John says from his Santa Fe studio, which is next door to his wife’s studio. “There is so much to paint there, just so many subjects, including many you never see in the Southwest. We found that when the wind picked up in New Mexico we were craving to go to Hawaii and just enjoy the weather and paint.”

Hawaii – The Paintings of John Moyers and Terri Kelly Moyers, opening March 17 at Mark Sublette Medicine Man Gallery in Tucson, Arizona, will present as many as 60 of the couple’s Hawaiian works, from hula girls on sunny beaches to marine life in crystal clear water to watercolor oceanscapes featuring volcanic rock and churning water. Watercolor, John says, was the preferred method of recording what they saw—“Watercolors are so easy to travel with, especially when you don’t need an easel, they dry fast and you can roll them up for the ride home,” he says.

Terri says their trips have always been wonderful, but the true impact of them usually sets in once they’ve returned home to the desert, far away from the nearest breaking wave or tropical shower. “It gets under your skin, and you start to crave going back. And we have, as often as we can,” she says, adding that she enjoys painting both aspects of Hawaii, the more commercial tourist side and the more cultural part that is the everyday, yet overlooked, side of the islands. “The people are just lovely wherever you go, and their culture is beautiful. It’s such a deeply spiritual place. We love to gather our stuff up and just paint watercolors on the beach where there aren’t too many people. It’s very therapeutic.”

Works in the show include Terri’s Sounds of Kauai, featuring a young girl in a traditional grass skirt, lei and holding a ukulele, one of Hawaii’s two official state musical instruments. “I did that one a number of years ago, when we had two young sisters pose for us for several paintings,” she says. “I enjoy doing the different textures and decorations, which is something I do in my Southwest work as well. Here, though, you can see different textures—it was a lot of fun.” 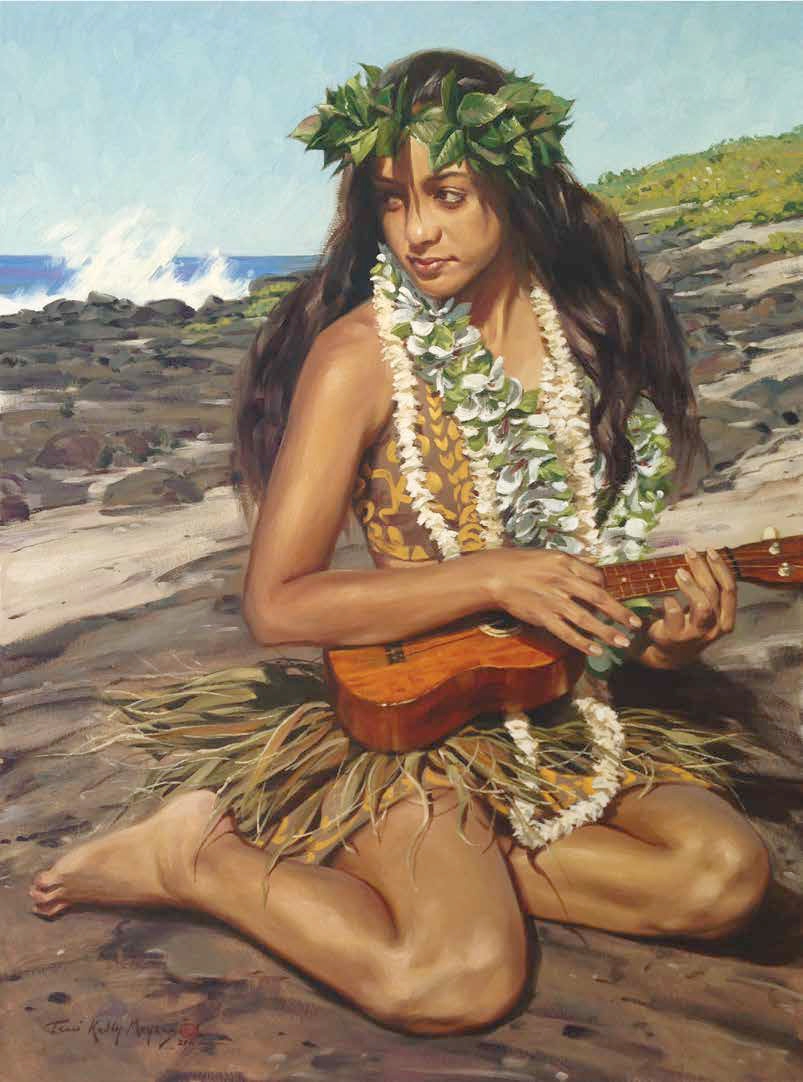 Other works include the oceanscape Primordial Hawaii, featuring a beach covered in volcanic rock and pools of reflective seawater. She points out that these rocks are some of the newest land on the planet, having only oozed from the earth as lava recently—“it’s humbling to think about,” she says. In Lapahoehoe, a watercolor, Terri gets to show off her pronunciation of Hawaiian landmarks; she says the word like “lap-uh-ho-A-ho-A.” Even her pronunciation of the state, with an emphasis on the E sound on the tail of Hawaii, shows how the couple have slowly become adapted to the state’s unique environment and culture.

For John, whose usual work is so closely tied to Native Americans in the Southwest, he can see similarities with the cultural beauty of Native Hawaiians, whose customs and traditions make the state a unique place, even amid a nation of unique places. “The people are just incredible,” he says. 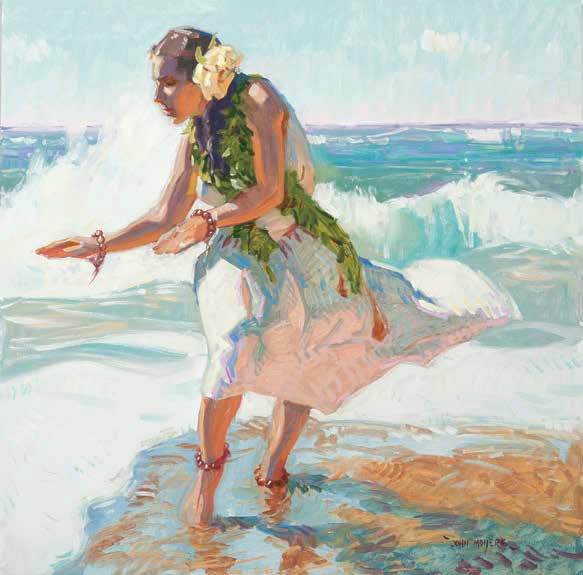 Wade Dance features a hula girl dancing in the sand as the ocean crashes at her feet. A similar theme is explored in Sunset Hula, but with dramatic golden light that comes from behind the dancer as the setting sun creates a striking silhouette. Many of the works were sketched on location in watercolor, and then used to inform larger oil paintings in John’s New Mexico studio. Other works include two paintings of wildlife: Honu, featuring a sea turtle in rippling water, and Three Jacks, an underwater view of a trio of fish against swirling blues and whites.

John credits Medicine Man Gallery owner Mark Sublette with supporting him and Terri as they deviated, in some cases greatly, from the types of works they are largely known to paint. “Every painting is a risk, but we could easily play it safe and only paint what sells, and probably make a good living, but where’s the fun in that?” he asks, adding that Sublette “trusts our work and encourages these risks.”

Terri, who also considers the show a worthwhile creative detour, says she is just trying to capture her figures in an honest way and with a true hand. “These subjects are so much fun to work with,” she says. “They are special to me, and I’m grateful that I’ve been able to paint them.”

After chatting about her Hawaiian work, Terri closes in a fitting way: “Mahalo,” she says. 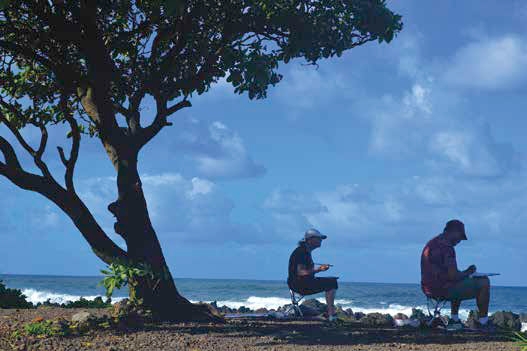 John and Terri Kelly Moyers painting on location in Hawaii.