WITH HIS MEDICINE MAN GALLERY IN TUCSON, ARIZONA.

“I only ever thought five years out,” says Mark Sublette. “I never thought to think past that. My original goal was just to see if I could do it.”

Twenty-five years and counting, Sublette, owner of Medicine Man Gallery in Tucson, Arizona, is not only doing it, but a leader of Western art throughout the Southwest. His gallery, long known for its appreciation of historical Native American artifacts and embrace of contemporary Western artwork, is celebrating its 25th anniversary beginning February 3 with a group exhibition that will include works from many of the gallery’s most popular artists, including some that have been with Medicine Man since its early days.

The name of the gallery has two meanings, one for the Native American medicine man whose role was vital in tribes throughout the country, and it is also a reference to Sublette himself, who was once a practicing physician before stepping away to deal in Western and Native American artwork. It all started in a very unassuming way: he was a collector first. 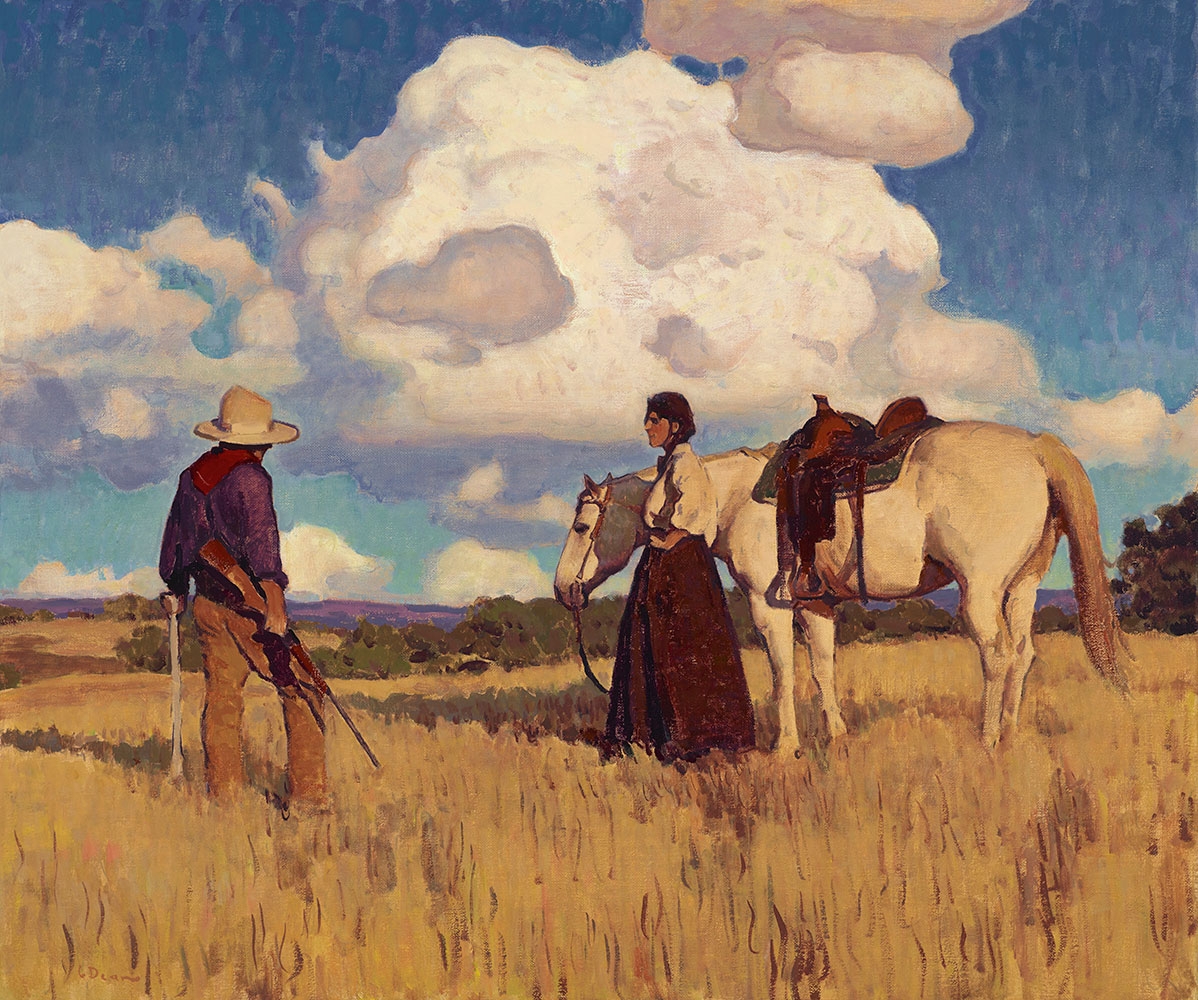 “I had been collecting art since I was a little kid, and then when I was older I got to a point that my collection was so large that I thought I would sell off some of it. I quickly realized I wasn’t too bad at it,” Sublette says from his gallery. “I had no training in art, nor did I have any training in how galleries worked. I just enjoyed owning the material and offering it to others.” 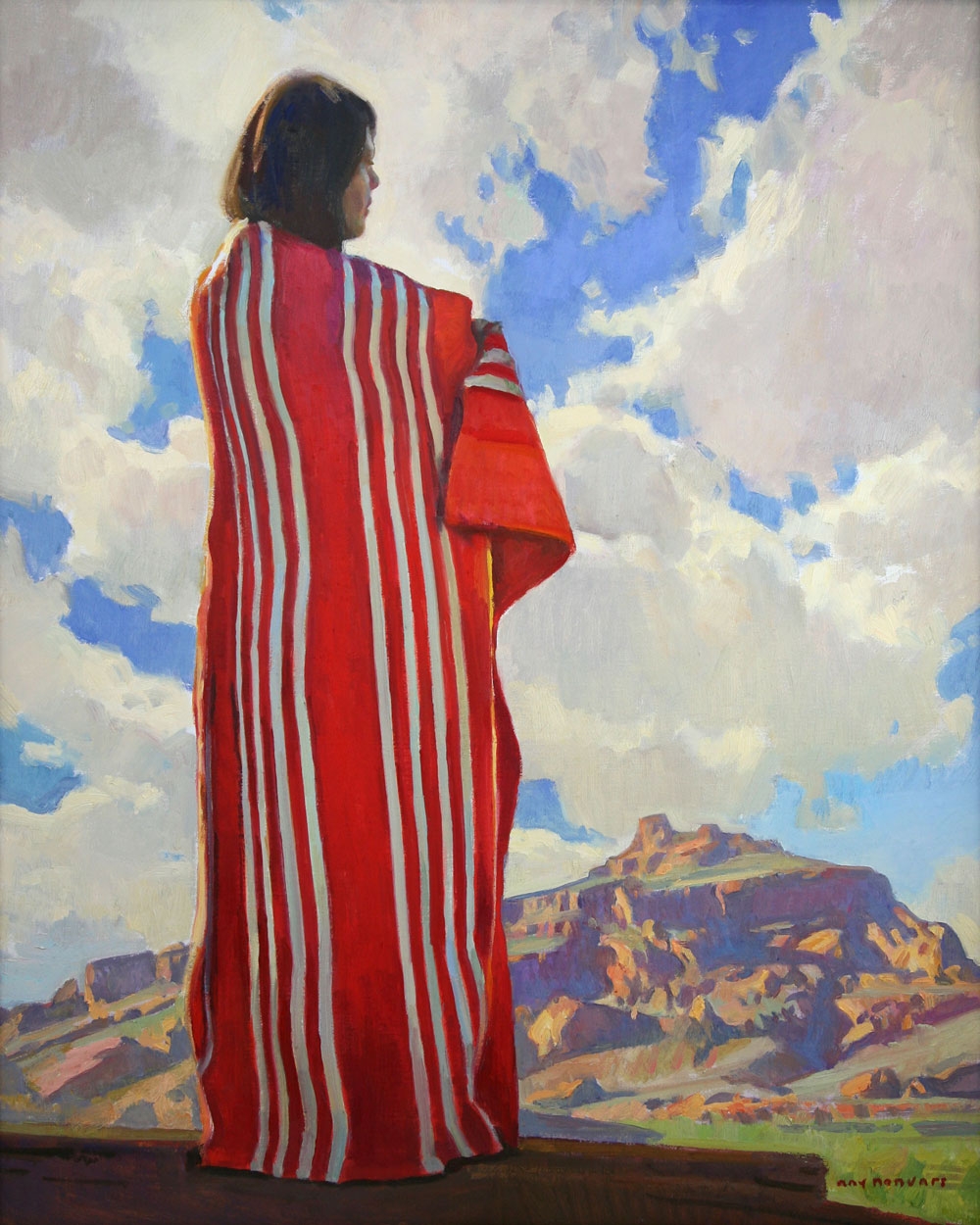 He says he started the gallery at what might have been the worst time to start to a new business, particularly one that offers high-dollar items like original artwork. It was 1992 and the economy was sluggish after nearly two years of mild recession. “There was a recession for artwork, a recession for real estate and it was really not a great time to be starting a gallery. But I was young enough to not know or care; when you’re young you don’t think about those terms,” he says. “I figured that if I could survive at that time it would be an advantage to me because if you make it at its worst, then in good times you would soar.” 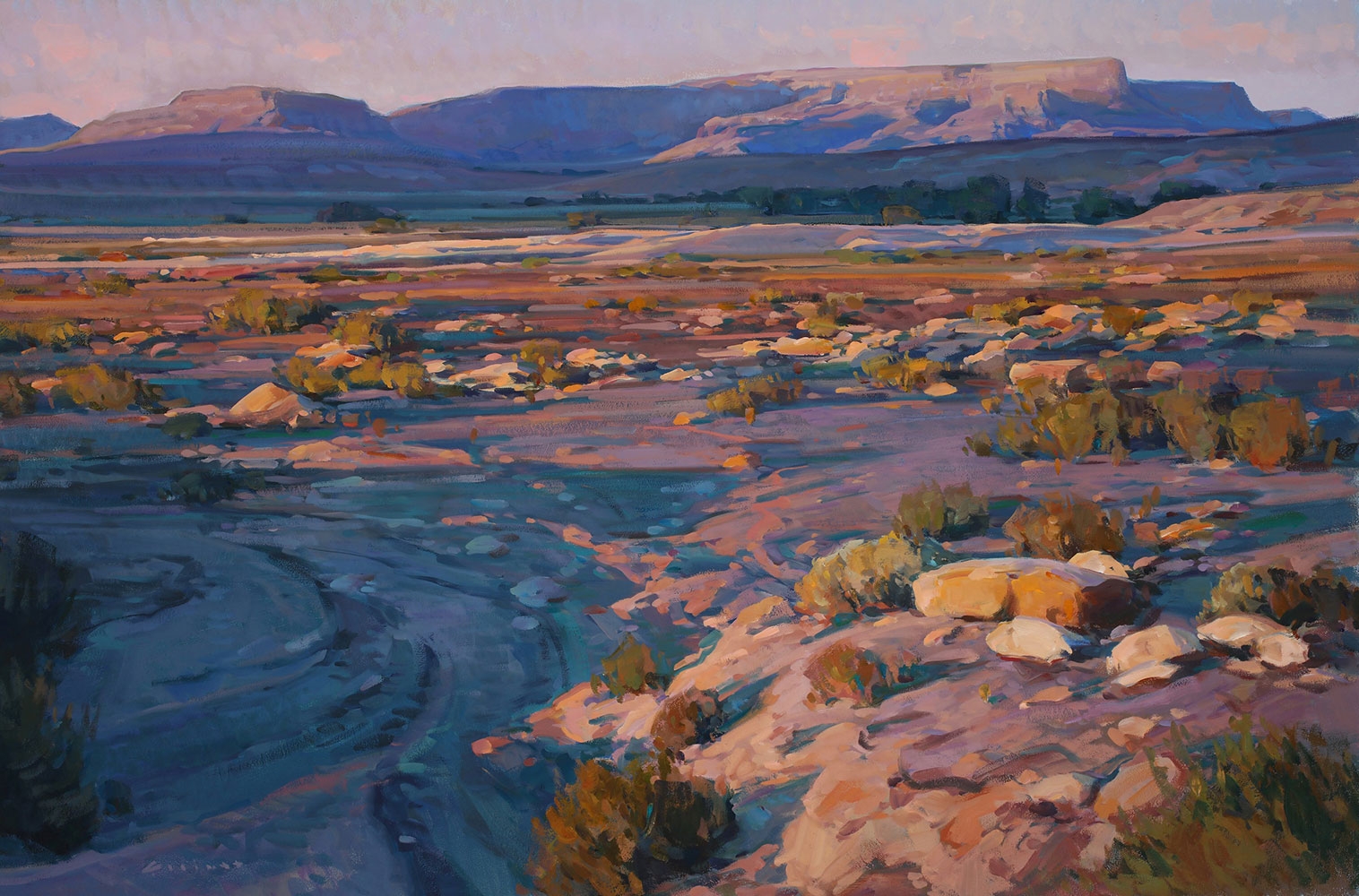 Those early successful years can be credited to Sublette’s business savvy, and also to his early roster of artists, including Ed Mell, Ray Roberts and Howard Post. “I was fortunate to have a great group of artists,” he says, adding that he “always liked them as individuals.” Works by Post and, later, Mell also revealed the gallery owner’s careful appreciation of more contemporary Western works. “I have always liked contemporary art, and some even more contemporary than that. I enjoy showing it and selling it, but I’m proud of everything we show, from fairly traditional cowboy and Western subjects all the way up to abstraction,” he says. “I’ve never had to worry about what I receive from each artist because I know, no matter what is, it will be the highest quality.” 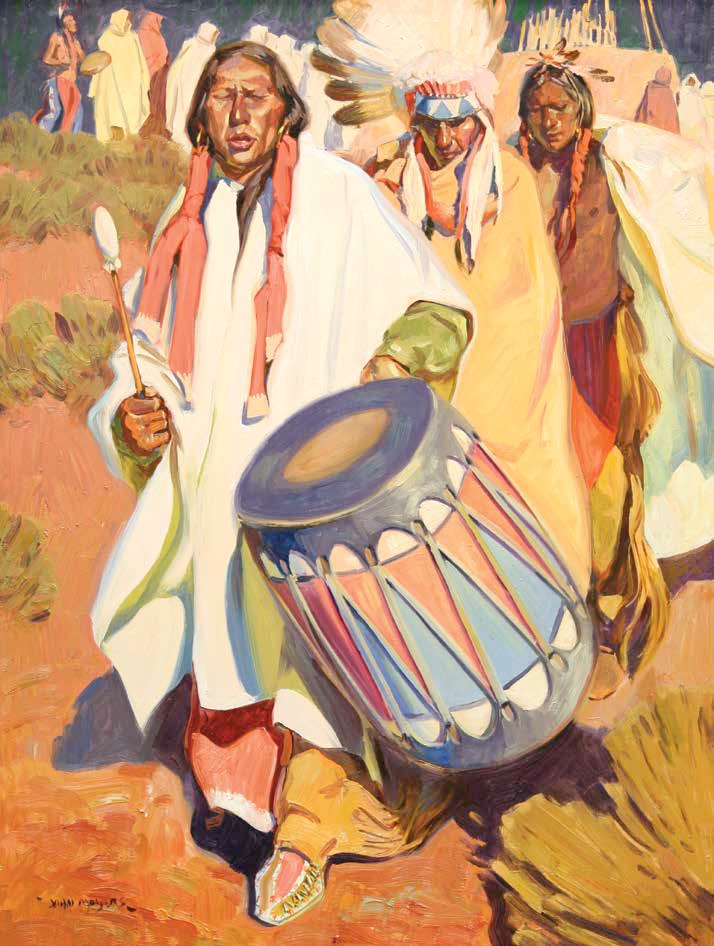 As Tucson and the surrounding communities continued to grow, the gallery owner remembers Tucson retaining its small-town feel. He recalls once hiking up near the foothills of the Catalina Mountains and thinking that the land was too beautiful for developers to leave it alone. Years later he was proved correct when development moved in and built strip malls, and then he was further surprised when the gallery moved into one of them after 20 years at a previous location. Luckily, he says, the buildings didn’t ruin the views, which are still glorious in northern Tucson.

In addition to owning a gallery, Sublette is also an accomplished photographer—“I always did photography as a kid, and I even had a darkroom,” he says—and prominent author, whose Charles Bloom Murder Mystery series is highly regarded. Books in the series, many of them with Western artwork on their covers, are Paint by Numbers, Kayenta Crossing, Hidden Canyon, Stone Men, The Butterfly Twins and Between the White Lines. “When you’re around creative people all day your own creativity tends to flow every day,” he says. “You start to seek out and explore creative events.”

Additionally, Sublette has also started the Maynard Dixon Museum, which is located inside the Tucson gallery and free to visitors. The collection started roughly 20 years ago and has since blossomed into a major collection of Dixon materials that, when they aren’t at home at Medicine Man Gallery, tour the country as part of major Dixon exhibitions and retrospectives. Sublette remembers having one Dixon piece early on, but then regrettably selling it. “I had to buy it back a few years later at a huge premium,” he says. “I learned my lesson, and I’ve kept it ever since. His work really resonates with me, especially his Arizona work.”

Mell, who will be presenting the cloudy landscape Yellow Horizon in the 25th anniversary show, calls Sublette a dear friend and admires the work he does for Western art in Arizona. “Mark used to be the only guy in town, and what was great was he worked with historic works, but also contemporary artists,” Mell says, adding that the gallery owner is well connected to art sources of all kinds. “I went down to visit him for a lunch and he asked if he could bring a client with him. I told him it wouldn’t be a problem. So when I showed up to lunch he was there with Diane Keaton, who became a remarkable friend and collector.”

He continues: “Mark is a class act, and his knowledge of art and artists runs the gamut of Western art.”

Another longtime artist who has been represented by Medicine Man is Arizona painter Howard Post, who’s been with the gallery for more than 20 years. Post will be showing Three Neighbors, featuring three mailboxes lined up on an old farm road. “It’s been a pleasure working with Mark and [his wife] Kathleen. Not only have they worked hard at selling my work but they have made me feel they were real champions of my career,” Post says. “In all this process they were never patronizing but always encouraged me to push myself. Most important they are quality people I’m pleased to call friends.”

Landscape painter Josh Elliott also sings the praises of the Sublettes. “Mark and Kathleen have put their individual stamp on Medicine Man Gallery. It is truly an experience to visit their space,” Elliott says. “In the 10 years that I have shown with them, I have come to appreciate their kindness, intuition and honesty. They love art. Mark has told me that he only shows work by artists that he would love to collect. He hand-picks artists that speak to him and I am honored to be part of that group. He, Kathleen and their gallery crew are the secret to their success.” Elliott’s piece in the exhibition is Last Touch, an evening scene of a desert valley bathed in golden light and purple shadows.

Husband-and-wife painters John and Terri Kelly Moyers have both shown with Medicine Man for a number of years, and they say the gallery maintains a unique place within Tucson and Western art. “They have always been very easy to work with. One reason we have such a great relationship is Mark and Kathleen are always willing to try new things, maybe hang a painting in their gallery that is different from any other piece that you have done,” John says. “Sometimes it works and sometimes it doesn’t but they are always willing to take the chance. They really work hard at what they do and it pays off for everyone. Not only do they have a great gallery but they are both great people.”

The Moyers will be showing a collection of Hawaii-themed paintings for a show in March, which, they say, is a testament to the gallery’s ability to try new things. “Terri and I have been painting in Hawaii on and off for 15 years hoping to do a show with the paintings we have been saving from our many trips,” John relates. “A while back we approached Mark and Kathleen about doing the show at Medicine Man Gallery. They didn’t even hesitate. The answer was yes. Most galleries would say, let’s do a show but it has to be a subject matter you are known for.”

Other artists who will have new work at the 25th anniversary exhibition include Glenn Dean, Stephen C. Datz, Dean Mitchell, Dennis Ziemienski, David Meikle, Matt Smith and many others.

As for Sublette, now that he’s hit 25 years, he’s not thinking in five-year increments anymore. “I’m shooting for our 50th next,” he says.