Merrill Mahaffey: Faces in the Rock 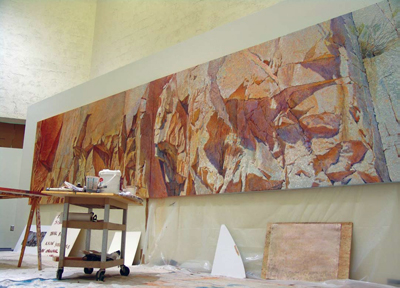 Merrill Mahaffey was commissioned this summer to do a 14 foot long painting for the City of Scottsdale's Public Library.

Merrill Mahaffey has made a living painting various incarnations of the rock forms found around his home in Phoenix, Arizona. His newest work, however, takes the idea of incarnations to a whole other level.

“I started seeing faces in the rocks,” says Mahaffey. “I did a big painting this summer and there is a place on the way to Globe, Arizona, where they have blasted the rock into a “V” in the side of the mountain and the highway lays at the bottom of it. I was there photographing the rock cuts and fraction lines and I saw a big face in the middle of my painting that was actually in the rock, and it was obviously there, so I thought I would just do a painting of that face.”

The painting, titled Emergence, shows the face that Mahaffey is talking about. To him, the face looks like a Persian soldier at the time of their battles with the Greeks and it has since inspired several more paintings by Mahaffey. 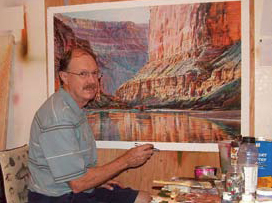 Merrill Mahaffey in his studio.

“I titled the original painting Emergence, as the faces emerges out of the rack, almost like a Genesis process,” says Mahaffey. “I also did a watercolor and that is called The Messenger because of the military look of this guy.”

This experience led Mahaffey to start looking for other rock formations around Arizona that have anthropomorphic qualities.

“The theme of most of the work in this show is anthropomorphic rock formations,” says Mahaffey. “True anthropomorphism is one like the Elephant’s Feet rocks on the Indian Reservation. Others are rocks that look like an old man, a witch or just people. I’ve been traveling around the country all my life and see those things and like them. It’s similar to looking a cloud formations and seeing animals.”

Other formations have recently attracted his attention as well. 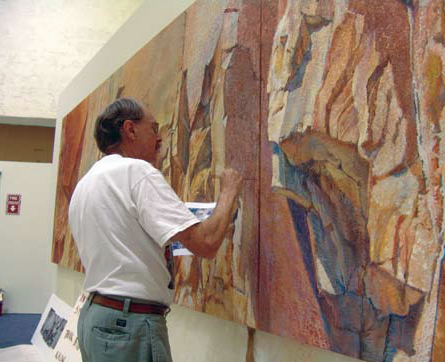 Merrill Mahaffey in his studio.

“I started looking for others and I found one at the bottom of Canyon de Chelly next to Spider Rock,” says Mahaffey. “This one looks like a cone head who is buried to his chin in sand. So, I did a painting of that. There is another painting of a wall in Havasu Canyon, a red wall formation with vertical cliffs over 600 feet high and when I photographed that, the wall was full of faces as well.”

Much of Mahaffey’s thinking about these subjects began during his childhood in Colorado.
“I am motivated by two things: one of them is that I was a science student in junior high school and the other is that I grew up in Colorado and there was a lot of mining going on there at that time,” says Mahaffey. “All of us boys would go out and hunt for rocks, look for rocks and it just exposed a different awareness of rocks to me, looking at big cliffs and big mountainsides.”

Mahaffey has been painting rock formations, in both a realist and abstract style, for his entire life. While his earlier work was more abstract versions of the landscape, he turned to more realistic interpretations of these places later in his career. Now, at 70, he finds himself turning towards abstraction again. 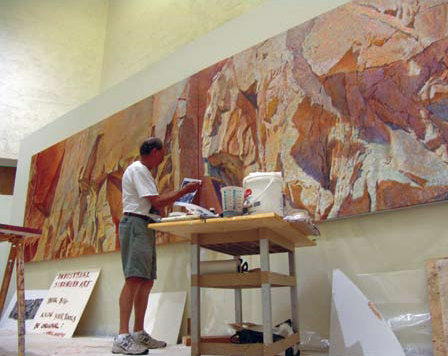 The work, titled Cochise Fracture Signatures, is in the style of his more abstract paintings focusing on strata in rock formations.

“I paint real things but they are abstract when taken out of context,” says Mahaffey. “That seems to be where my brain is these days. I was in the Western desert two weeks ago, west of Wickenburg and I look across the desert and instead of seeing the desert floor I saw the ocean, with all of these islands looking out of the water. And, it shows that with a little imagination how things can be transformed.”

Just as rocks are the basis for the geography, they will always be the most important aspect of Mahaffey’s work, whether in the realist or abstract style.

“Rocks are the bones of the earth, water its lifeblood and the element which makes the earth livable for others,” says Mahaffey. “Rock, just like organic matter, has its own slow-paced life as seen in glaciers, streams, lakes, moraines and cliff fractures. My art asks that we try to understand the land as more than scenery.”

Earlier this summer, Western Art Collector was invited to visit Merrill as he painted a new 14 foot mural for the Scottsdale Public Library. The work, titled Cochise Fracture Signatures is another abstracted look at canyon walls and the rock formations and fractured lines made by nature.