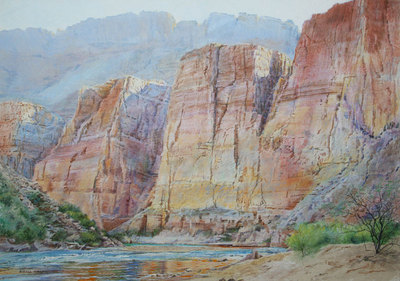 Landscape artist Merrill Mahaffey revisits two familiar locations in his newest work: the Grand Canyon and Lake Powell. He painted the latter area in the 1980s and hasn’t been back since.

“It was fun to visit new canyons and see the water level,” says Mahaffey.

“If you look at rock formations, particularly the fractures, there’s a geometric-abstract form system. I want to do a series where I zoom in on those features,” says Mahaffey. “There’s hidden geometry inside these rock forms that compares to looking at architecture.”

Best known for his luminous paintings of the Grand Canyon, Mahaffey has spent his career “interpreting the landscape to express concern for maintaining a natural wilderness.” He has an attraction for the monumental scale of the geological formations of the Southwest.

In keeping with his latest theme of erosion, Mahaffey’s new images include distinct interpretations of going into narrow-sided canyons and looking at fractures that descent into water and making reflections in it. Examples can be seen in Canyon Pearl and Navajo Corner Reflection. 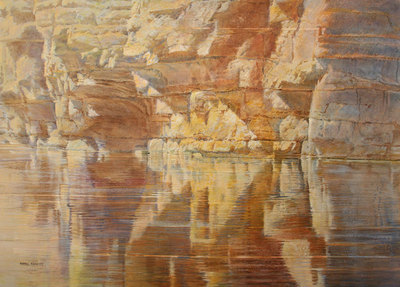 “I paint these things that are scary. There’s a danger in my subjects because I know those rocks are constantly cracking,” he says. “I just love the colors and forms in rocks. It’s about shadows and sunlight. To me, it’s like looking at a big stage and the rocks are the characters. I’m starting to see all the faces in the rocks.”

An avid traveler, Mahaffey has traversed the Colorado River through Grand Canyon 29 times, capturing its sensuous beauty and magical light in his paintings. Fascinated by the canyon since he first saw it in 1961, the artist incorporates forms and symbols he observes into his work. When Mahaffey travels, he says, he does so as a person searching for the meaning of the land. And, as his focus shifts, so does the imagery.

Each of Mahaffey’s paintings conveys his feeling toward a place. His romantic-realist style doesn’t idealize the subject but rather distinguishes it from other contemporary landscapes. Painting in up to eight color layers makes his work look unique and keeps it fresh.

“The paintings I’m doing now have a more translucent quality in the colors than ever before, and the pain isn’t as thick as it used to be,” explains Mahaffey. “My work doesn’t look like everyone else’s version of the Southwest.”

He attributes this distinction to his use of colors. He depicts space with color rather than light and dark.

“I’m very scientific, and I understand how the land works and I convey that,” explains Mahaffey, “And I’m still very excited by my next painting.” 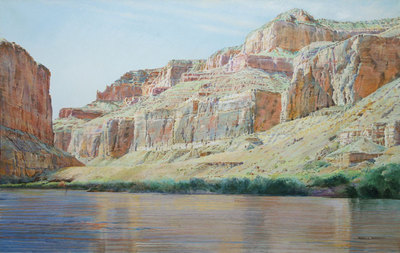