For his first solo show at Mark Sublette Medicine Man Gallery, Arizona-based artist Merrill Mahaffey presents varied-sized canvases, in addition to a series of five small watercolors of the Catalina Mountains, which focus on the motif of rock, or "geological geometry."

"The most important issue I've concentrated on this year is what makes a cliche," Mahaffey states. "I've been taking stereotypical subjects and looking at them for their symbolism."

Nowadays the 75-year-old admits he is most happy when he's in his studio mixing paint colors. "I've had enough adventures in my life that now I spend time interpreting them," he remarks. "These paintings are from my heart and whatever I choose to paint now is important."

Armed with master degrees in fine arts and art history, Mahaffey interprets his subject matter rather than simply duplicating it. "I see this as a body of literature and I'm trying to contribute," he says. "I paint for art history and that's how I'm different. I'm serious."

Mark Sublette, President/CEO Medicine Man Gallery, says, "Merrill Mahaffey is one of those rare artists whose love of nature translates effortlessly from his vision to his art." 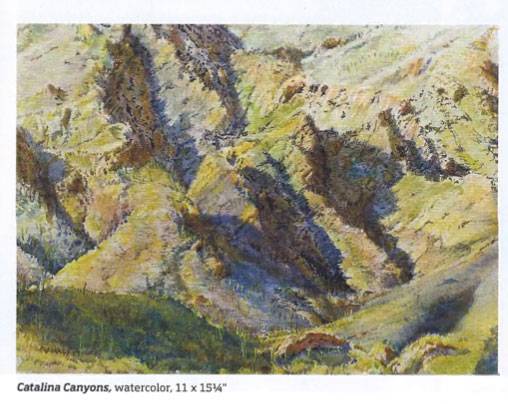 Mahaffey's carefully crafted representational landscapes speak to his ongoing understanding of the painting process. "If there's an essence to my work," he comments, "I'm aware of where the sun is. I think of it all day long. I pay attention to the direction shadows are casting. When I do my paintings I try to express that quality." 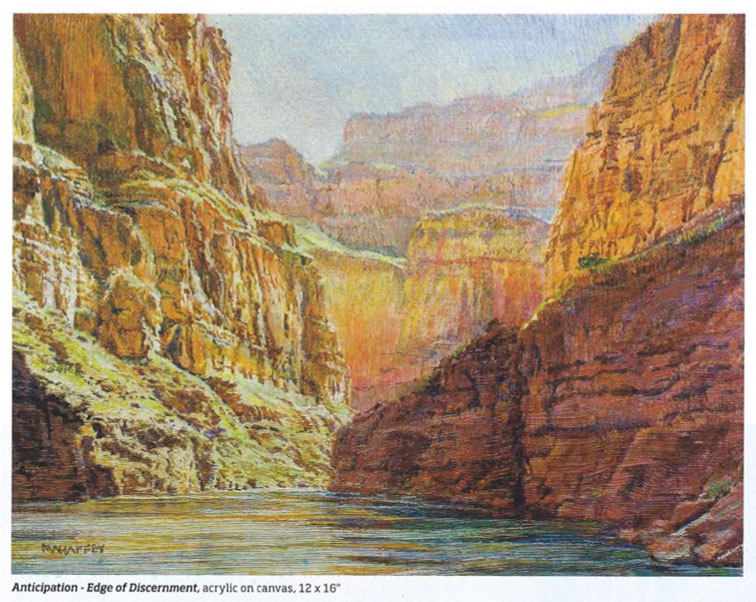 Mahaffey has taken 39 annual trips down the Grand Canyon. In his latest work he presents three or four views of the canyon from the river. The painting Anticipation - Edge of Discernment—which he regards among his "greatest hits"—juxtaposes the shadow world and the sunlight world.

"I'm trying to show what the interior of the canyon looks like. And I'm one of the first artists who has ever taken that on," he notes. "Most of the content of the painting is what's in the shadow."

The painting's title - Anticipation - signifies the fact that the viewer is approaching a corner of the river and can't see what's coming. "When you can't see downstream, you anticipate," Mahaffey adds. "Anticipation tries to be ambivalent," which is a common element in his work.

On March 8, from 5 to 7 p.m., join Mahaffey for an artist's reception and book signing celebrating his lifework, titled Upstream Downstream, in the gallery's new expanded space in Tucson.