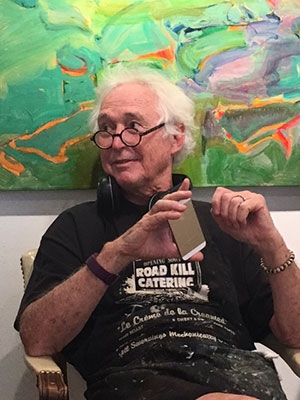 Mel Smothers was raised between “farm and city” as he puts it. As a child, his family moved to a farm in the vast expanse of the Sacramento Valley where he would began his artistic journey, playing with pencils and paint. In fact Smothers still holds paintings from early childhood. These paintings would later become instrumental to Mel’s art career.

Several years after moving to Sacramento Valley, his father moved the Smothers family up to a cabin in the mountains of Yosemite. He recalls his dad and uncle chopping down pine trees for their cabin and the heavy smell of fresh cut cedars and ponderosa coming from the Ford Model A powered sawmill in the backwoods. During his time in Yosemite Mel met a mounted Wilderness Ranger, compelling him to become a backcountry ranger himself. He says of his time in Yosemite: “These memories continue to serve me in my endless mission to reproduce the sublime qualities of nature. It’s in the trying that I find art.”

Returning to him in his mid 40's were profound memories of joy. Discovering 40 year old paintings of his own hand changed his personal goals to living a life of art. To accomplish his goal of returning to painting he went back to college, finding his way to Wayne Thiebaud's classes. With Wayne's guidance, he finished with a MFA from the University of Idaho before becoming the Audubon Society painter in residence at Levenworth, WA headquarters, teaching at Sierra Nevada College along the shore of Lake Tahoe, Nevada, and finally returning to UC Davis to teach figure painting.

Sending a postcard of a California landscape to a New York gallery list, he was invited to join an offshoot of the Pace Galleries, Monique Goldstrom in SOHO. In 2004, he moved his studio to NYC where you can find him today at 70, still following his dream, in the Chelsea art district, holding an open studio on Saturday afternoons and posting in his Instagram blog @andydialogs.

"For me, painting is about the journey. That needs to be said. Validation comes and goes. What remains is the visual road map created by the struggle of painting. The story of pushing paint around, and as the years go by, finding it is the reason to get up in the morning."

To this day Mel credits his upbringing and environment for his love of paintings, the sound of a fiddle and his unwavering commitment to fly-fishing.